Any plans for a DJS1000 style sampler

Will Denon be looking line-up, something to add a sampler to the Prime series - something akin to the Pioneer DJS1000 - I know the players have sampling capabilities, it would be cool though to be able to use a dedicated sampler to create tracks, rather than enhance existing tracks.

Hi @subwax, thank you for your suggestion!

Unfortunately we can’t discuss planned products but we’re always listening to see what Djs are looking for.

This! It’s a must have!! I really wish denon can implement this soon in 2019

I’d rather see a new product from Denon rather than support from existing products - look, for instance, how the SC5000 broke the barriers of what we were able to do. Something that Denon are continuing to do. If we can use computers in the SC5000, I am sure we could use them in dedicated performance samplers too. I’d also like to see something that goes with the SC5000 design - something that can be installed in clubs, that matches the design of the SC5000 / SC5000M devices.

The use of WiFi would also be interesting, if the devices can talk over that.

If you know what hardware is inside the Akai MPC live, you would perhaps respond otherwise.

Apologies - didn’t mean to diss the Akai at all - I have no knowledge or experience of it. I’d just like something that matches my Denon setup, and integrates well.

This already exists through either the MPC Live or Akai Force.

In my setup, I am using the Elektron Digitakt sync’ed via midi clock from the x1800.

Absolutely! I own a DJS-1000 and I can tell you that using it in conjunction with my X1800 isn’t worth it. There’s a huge comparability issue. By no means is it either parties fault because they just weren’t meant to work together. I would gladly sell my DJS-1000 for a dedicated sampler/sequencer from Denon in a heartbeat. Denon Sampler/Sequencer Wish List A lot of on board memory. Ability to sync over MIDI with X1800 Connect via Link with SC5000 Onboard FX Simplified save feature Included tutorial on each feature + Tooltips Ability to send and/or play a sample to an empty Hot Cue on the SC5000

I can go on but this is my first post here so I’ll stop now. Anyway thanks for everything Denon.

Getting two departments to collaborate will work. Akai Pro are respected for their particular field and so are Denon DJ. By using the power of both brands it would be beneficial as a selling point. As Akai Pro are veterans at making stand alone samplers/production gear they could make the insides and let Denon DJ make the external styling and its trademark green GUI, it would be a great start and have a strong following from the outset.

Something like: “Denon DJ XS-1000 Powered by Akai Pro” 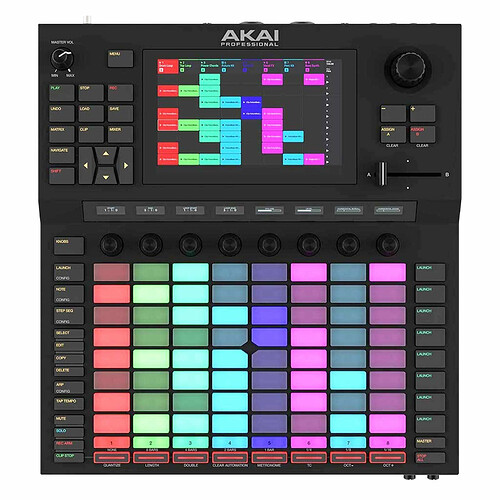 That Akai looks great, but I wonder if its a bit too complex for me personally. I haven’t used one yet, so am just guessing, but it looks quite complicated. Great looking piece fo kit though, for sure,

I have played on it and love it. It exists but it’s not fitting into a DJs workflow.

It is a little complicated for general DJ performance. It needs to be optimised… drop the grid size down and make it friendly for our environment, the one that has us paying attention to two decks, a mixer and a crowd of people wanting requests.

The Force is designed for artists. We need a cut down version at about £800 in the form factor of the Prime range.

The Force is strong… just not DJ optimised.

I think the price is likely to be more around the £1400 mark, similar to the SC5000’s, if the DJS1000 is anything to go by. Would be very happy with £800, of course, but would be happy to pay a bit more to get the same build quality as the SC5000’s. Use of colour is important too, so the layout is critical as well. Hopefully the same screen as the SC5000’s too. WiFi connectivity will also be important.

I know Denon cant tell us if they are looking at this - could they confirm if they are not, though - if thats the case, I know I am waiting in vain, and will need to consider an alternative.

The Akai Force is only £1300 and the Pioneer DJS1000 is £1169 so I think £1400 would be far too much to pay. As Denon DJ undercut Pioneer DJ by £500 per player/mixer I can only think a £500 cut on any future sampler would be on the money. As Pioneer have a few options (Squid) all in the same ball park, they don’t need to make it complicated. It’s only playing back quantized wav/mp3 files on the beat as that’s all we need. Layer samples in a grid (like the Launchpad app).

To be even more of a killer ‘one-up’ over Pioneer DJ… add it to existing players as a Deck 3+4 option like Traktor did. If you want it as a FREE upgrade you could sacrifice the two layer decks and have samplers on those channels and it could come as a value pack.

Maybe use the streaming Loop Cloud library for the sampler like they have done on the Akai Force.

It is all possibilities. Traktor added a step sequencer as free upgrade. If Denon DJ want to turn heads, why not do the same. Let Pioneer DJ charge the earth for something that can be added for free to the players and make the Prime range have another ‘one-up’ when Pioneer finally bring out another challenger (Nexus 3?).

Who knows? A new player would be nice but a free loop player in the firmware is better and has a good marketing appeal.

What exactly do you mean by optimized?

As someone who started out doing Live Performance then moved into Deejaying, I am previously used to keeping track of multiple pieces of gear during a song performance already.

I’d like to know what simplifications people look for, especially when teaching others myself. I have a bad habit of jumping straight into the advanced and confusing people.

Wondering. Not big on samplers and such, but would an iPad with Mixvibes Remixlive or Beat Snap be an option for a low investment solution?

Remix live was the name after the Lauchpad app that I couldn’t remember. Thanks!

And yes… exactly that. It’s cheaper to add an iPad and app than buy a stand alone unit but if anything was on the cards then a similar system to how they work would be ideal.

To be optimised it would be to have DJs in mind from the start, not producers. A GUI that reflects big chunky, easy to see onscreen buttons while keeping it relatively simple to load samples without having to look pages deep and remove focus from their priority of DJing. It should be an additional unit to a system and not a primary making it something that can be easy to use from the start. Something like the Alai Force would be for someone who has making music as a primary objective. A DJ based unit would be a secondary goal. It would he there to accompany the set rather than be the main attraction.

This means it has to be simple. As most DJs aren’t producers they need to have a loop playing machine that screams simplicity but still leaves room to grow. I have the Ableton Push V1 and love it but it’s a little over complicated for DJ purposes. Trim the fat and bring to the forefront loops, filters, samplers, FX and drop the production based features (as this is a setup that would live in clubs or DJ setups) and remove the high price.

If Pioneer DJ can bring their Toriaz ‘Squid’ to market for £529 then so can Denon with the help.of Akai Pro.

These units should be no harder to use then the Launchpad or RemixLive apps. This begs the question why would they bother if an app exists? Well a permanent install in a booth is a possibility if the price is competitive and marketed as “part of the family” (Akai Pro isn’t) and could be included as part of promos. Also, if Engine Prime was the method used to load the samples to their media then when they got to gigs then this would encourage users to have a library bank ready to go from within their daily use software if they encounter one.

There are better solutions out but Denon DJ need something to be part of the family. The look and feel of an interface that looks like it belongs together and is intuitive to use without alienating people. RemixLive achieves this and so does many apps. I feel the learning curve would be too much for any other production based software.

This could all be done for around the £500-£600 mark. As Denon DJ have proved by different more technology for much less £££’s, this could mean any future product would halve the price of the Pioneer option. It’s not like they are having to start from scratch. They have huge resources to draw from and can approach Akai Pro to take a model that is already out there and strip things away to make it more DJ friendly and put it inside a custom box in the shape of a SC5000.

For most of us we could use an app but from a business point of view it makes sense to offer something to what the competition are doing. Pioneer DJ have the £500 Toriaz… Denon DJ have a great resource that is Akai Pro.