Your experience with DMX to LED stripes? --> Fixture groups for pixel chasing

There is a custom (and pretty cool) project I’ve been working on for quite a while now. One core element will be controlled by one NanoPixx DMX512-to-SPI decoder, which can adress ‘intelligent’ LED stripes (like WS, SK, APA…) with individual pixels. With one DMX universe you can adress 170 pixels á 3 Channels (RGB). Perfectly fine so far!

Now what I need to know is how well Soundswitch plays with such DMX decoders, to be more precise, if it allows the user to create custom fixture tracks. Normally, when you connect e.g. a GigBAR, it is one hardware fixture brand, but it consists of multiple sub-lights (strobes, PARs, lasers…) which are all displayed as individual fixture tracks. I need exactly the same for my LED stripe, since I gonna split it in multiple parts. I really don’t want to hassle with hundrets of channels in one track. I want to pre-group them as well, so I can apply different effects/chases/macros to them (“stripe section 1 please strobe. stripe section 2 please glow in blue”, etc.). To visualize:

I am in contact with the Soundswitch customer support already, and while I appreciate the quick and kind response, it wasn’t an 100% confirmation, more like “should work”. Hence I wanted to reach out for the geeks here, who have already realized something similar. I have seen some videos where people adressed multiple LED stripes with Soundswitch, but I am not sure if a) they used one DMX decoder for all stripes and b) if so, if these stripes could still be grouped/displayed as multiple fixtures in soundswitch. Thank you so much everyone!

I used a 30 channel LED DMX decoder to create some LED strips encased in some profile but they weren’t individually addressable.

Now you can address individual pixels in light bars that support it. I do it for some. You have to set the fixture type to “multi cell”.

As long as the DMX decoder has the correct profile made by SoundSwitch, I’d like to think it would work. If so, I’ll give something like this a go myself.

Hi, i did they same. I used some cheap AliExpress rgb controller and build some detachable LED Stripes. Works fine.

So in theory if you have the right conversion from your DMX to SPI controller. It should work. Only thing I see as problem is what DMX signal the converter needs. But if it just need 3 addresses and the value, you should find a RGB Controller in the fixture catalogue. But no promises.

I also want to implement some pixel mapping. So if it works. Please tell us 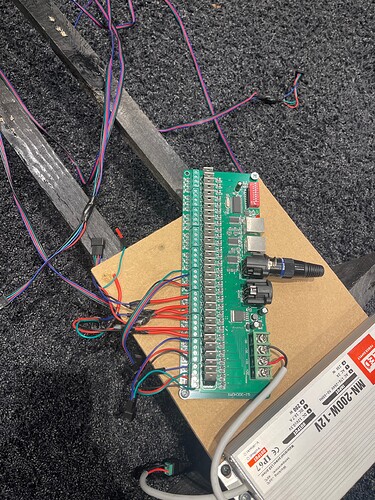 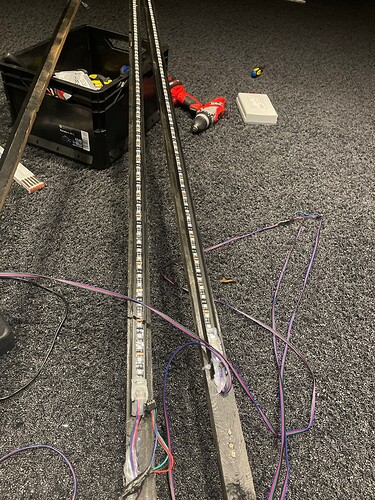 Thank you both! I did some further research, and it seems there is in fact a functional gap in SoundSwitch when it comes to LED Pixel stripes. I haven’t found ANY video yet, where someone utilized individual LED pixels in combination with Soundswitch. Only whole LED stripe segments. Because SoundSwitch can treat those as standard ‘dumb’ LED cans with RGB(W) dimming values, and that’s mostly it. They are easy to control.

Thanks to MrWilks I investigated further, first about “multi cell” fixtures, then I found what we are actually looking for, LED pixel chasing. Like shown in this video. And watch this guy here, he is using a Chauvet Core 3x3 with Soundswitch in 27ch mode. By doing so, SS automatically created individual sub-fixture tracks for each of the 9 pixels/segments and he could utilize those.

This is exactly what I need for my LED pixel stripe. The major difference here, I don’t want to e.g. buy 10 DMX decoders to address 10 individual stripe sections with 9 pixels. I want ONE decoder to address the whole LED stripe as intended (it can address 170 RGB pixels after all), but with SoundSwitch allowing me to create those 10 sub-sections á 9 pixels myself in the GUI (via DMX addresses). Then I would proceed like that guy and simply create those LED pixel chasings manually, by working on the 9 pixel tracks. Cumbersome, but as long you can copy-paste your created chases into other tracks (and music songs as well), and/or save them as macros, boom, problem solved.

That’s why I need more sophisticated developer assistance/feedback rather than just the support adding one hardware fixture (the DMX decoder). Because I still don’t know how much freedom SoundSwitch gives me to segment and ‘pixelize’ the LED stripes connected to it. I am only aware about ‘custom fixtures’. But I can’t test that without buying the decoder and stripes, though.

This is exactly what I did with the same DMX decoder. Even down to the same aluminium profile!

Hopefully one of the SoundSwitch team can chime in here and help and even take feedback back to the devs and help create something where it’s easier to implement.

Arkaos can do pixel mapping and now that’s part of InMusic too, maybe they can lend some technical know how to add this feature.

I sent this Mockup to the SS-support and watched further videos (as said, without owning the LED hardware yet, there isn’t much I can test about the software now). 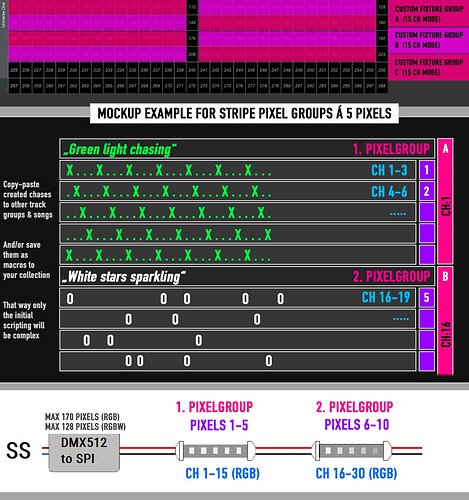 In short words: Soundswitch has some pre-existing chases with pretty decent automation. But they only work for fixture groups. Like an array of 8 LED spots, or said Chauvet 3x3. Now all we need the ability to create custom fixture groups for LED stripe sections.

→ Can the SoundSwitch support enable custom fixture groups in general? Like a popup box where you simply enter some parameters? Here an idea. Btw, pixel grouping means treating each 2, 3, 4… pixels as one, to save channels and screen space.

→ OR, If not possible (yet), shall I simply tell them about my DMX decoder, the LED stripe section and pixel quantity, and they can manually add a fixture group for me? A support/dev team statement would be highly appreciated

P.S. Excuse me everyone, I am a geek.

I’m also looking at how to do it and maybe find a solution. , I also sent an email to Liam to be able to have a variable fixture just RGB where we can put the number of leds to control so as not to take all our universe, for the moment I use wled in effect mode, you have to use the attributes for chases and other effects.

But I’m also in the process of testing using wled in multi rgb mode and grouping the leds on the segment of wled and in fixture I only add sritp rgb 12 leds in SS and I fill in as many as I have grouped leds I am testing with 144 LEDs, therefore 12 fixture strip LEDs and I can put some LEDs in multi secondary and others in muti primary or wash finally combine the scenarios but not yet test too much but it works.

1 file sent via WeTransfer, the simplest way to send your files around the world

sorry for my poor English