some of you use SSD Transcend ESD220C? I have trouble reading this SSD. It is new, already formatted 2 times, but “random”, when I go to upload music to the SC5000, I get the message that the “corrupted database file!” If I use it with Mac and Serato, I have no problem. Do you have any advice to give me?

How Many Files do you use?

Is it formatted correctly; e.g. exFAT?

If you’re stating that Mac + Serato is okay, than I presume it is perhaps formatted otherwise.

about 5000 but I do not think the amount of files to give me a problem, even because they are relatively few.

If you’re stating that Mac + Serato is okay, than I presume it is perhaps formatted otherwise.

yes, formatted ExFat Same library, but loaded on SSD Sandisk, no problem at all. I had taken a new Transcend portable SSD to have a second backup drive ready for use. Already formatted a second time, put in the library, worked for two weeks without any problems, and yesterday gave me the usual problem “Corrupt Database”

Did you update the Fw already? The new Fw works much better!

Did you update the Fw already? The new Fw works much better!

Yes…updated everything … contacted Amazon and changed it directly. But I still remain with the doubt, also because I will come in an equal one. The fact is that just when the “corrupted database” screen comes out, the SC5000 crashes on that screen and no touch control on the screen is working anymore. I must eject the SSD

Yes…updated everything … contacted Amazon and changed it directly.

Personally I am not a very big fan of exFAT due to potential compatibility issues. As the 4GB file size limitation of FAT32 doesn’t apply to us DJ’s (if you have audio files bigger than 4GB each you have other things to worry about

). I would give FAT32 format a try. Don’t do the quick format but a full one.

hi guys, how do i upload a video i have in dropbox? I uploaded the link but says the format is not supported on the Denon site. Probably something wrong … if you have any suggestions?

I got the new SSD replaced right away, but I find myself in the same situation. Formatted ExFat as by Denon’s manual, and while I’m playing after a while, I’m going to load another song in the deck and find that instead of loading the file right away, the SC5000 starts with a file analysis immediately after the exit with the corrupted database file written off. I can play the file, but as soon as I go to choose another file, all the database will disappear. To avoid turning off everything and restarting the machine, when this happens to me, as long as I see that it is doing the analysis of the offending song (which may be any) I have to be ready to choose another so that I can continue to play . I hope I explained myself…

you say i could try to change formatting? 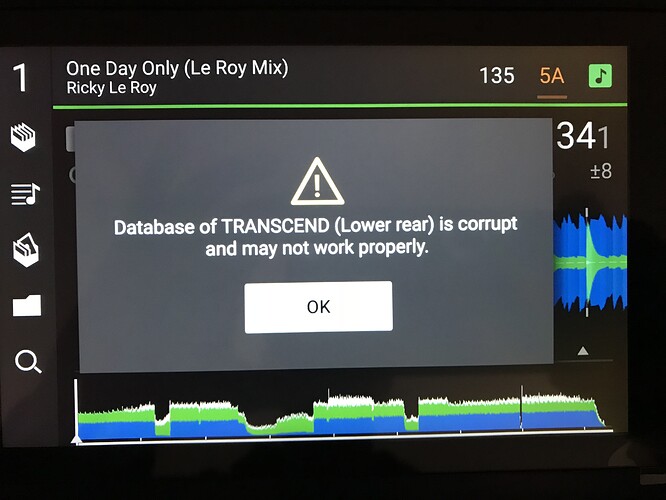 A photo at the moment

I think it is a problem of the Transcend Hardware. It is not the salvation of the problem but i have a second HDD (!) as a backup. It is a 1:1 copy of my Samsung SSD and in my opinion the SSD is not so much faster than my HDD. This Problem seems to be just a Transcend Problem. Perhaps try a extern HDD ?

as I said above, I have the same database on a SSD Sandisk and this does not create any problems. Yesterday, however, I tried to follow the advice I was given to. I downloaded this “Fat32Formatter” program. With this program I can format SSDs or HDDs greater than 32GB and maintaining the total capacity of the SSD. Formatted the SSD, I did the back-up, but then it was too late to try it. Tonight I’ll try it right away and let you know if something has changed. I remember that Formerly Formatted ExFat.

I’d check to see in the add has any sleep modes - in theory, a device with no moving parts should need a sleep mode unless there’s some other overhead sappingbresource on the ssd eg: power consumption, background tasks on the add etc

I did not understand, what do you mean?

Ah ok I understand now, no no shutdown of the SSD. Cmq update live, I’m trying it out with Fat32 formatting It’s running for an hour, and for now all right, no black-out. I hope I have solved it, it would be a great find for those who experience this inconvenience. I keep my fingers crossed. Tanks Gee_DenonDJ

And here I was thinking I was the one suggesting Fat32 instead of exFat, ROFLMAO.