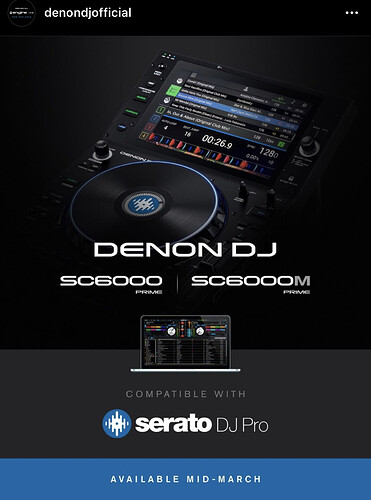 Does anybody know, if the 5000 Series fully Support Serato DJPro too?

Yes, they do from a longer time now. Including the moving platter in the M’s

They just can’t wait 2 or 3 more weeks seriously and then make massive promotions ? Teasing teasing … is boring and frustrating at the end.

Why You ask me? I am not Denon employ…

Sorry, I just wanted to reply to the subject and not particularly to you

Marketing ??? Tell me which company is very good in marketing ? Apple, Pioneer, Coca Cola…have seen them doing this kind of long teasing or pre announcement most of the time ??? Sorry but it’s not marketing at all ! If you make efforts to catch up customers then you can’t offer them what you have advertised…then you can loose this customer…it’s basic

Apple do, they usually announce, let you pre-order the week later and then it’s about a month until it drops.

They just can’t wait 2 or 3 more weeks seriously and then make massive promotions ? Teasing teasing … is boring and frustrating at the end.

But, if tomorrow someone when out and bought something other than denon primes, because he really wanted Serato integration, these “coming soon” announcements help provide people with buying decision information.

But I agree, there’s a limit. Saying “coming soon” on something and a (non-covid) year later, it’s still not around, then tips the balance from teaser campaign to torture campaign.

The original or release email went out from Serato a couple days prior to Xenon’s public announcement. It is possible that Denon thought Serato was already ready to drop the update.

Mid-March isn’t really a massive teaser at all. It is literally two weeks away. TWO.

There is no “real” teasing, especially when we’re talking around 14 days notice.

The longest 14 days ever ever

Yes just 2 or 3 weeks so why the hell they just can’t wait ??? It’s more than one year sc6000/sc6000m were announced with a future Serato compatibility …waiting a few days more is not critical ! Denon is lucky Pioneer is not aggressive because they could literally kill the hype around Denon teasers by doing teasers too just after them !! From a strategy point of view theses long awaited teasers are mistakes, can you imagine a chess player announcing what the moves he will make ??? Are you more impressed when someone shows you a incredible thing or when someone tells you he will show you something incredible ??? DJWORX wrote an excellent article about this false hype around teasers.

Apple fully controls their communication, they make keynotes with a bunch of information and the product can be directly be demoed/tested in live. For me the communication around the LC6000 is horrible. In fact, since the “change your rider” (and maybe before with the sc3700/sc3900) Denon’s communication is bad, people just keep in mind delays and delays.

Don’t get me wrong, I still love Denon’s products and potential but they can and have to improve a lot this marketing/communication thing if they really want to challenge PioPio

I think of the LC as a prototype, you know like car prototypes. It may get released. It’s a flex leak, just pure flex.

TBF I think Denon have been stuffed a little by BPM not being available, that’s when they would usually launch and punters would be allowed to try.

What I’ve seen from afar where they do make a mess of things, is delivery slides time and again after an initial launch date, so you are right in they are miles of Pioneer with this.

I think Pioneer DJ did the same with their al-in-one controller too. I’m sure they released one with “future Serato DJ compatibility” announced for a few months later. Was it the RX2? Something like that.

As pointed out above by @yeltsin, there is no trade shows (NAMM/BPM/Musicmesse) so they have to show things off in a way they would have on the show floor. I remember going to trade shows and seeing prototypes of products that may or may not make full production. The LC6000 could be a full product that will ship but equally could be a “see if people like it or think it’s pointless and don’t make it prototype”.

I would have liked to have seen more info on it too but it could still go through revisions and redesigns.

Denon DJ themselves haven’t teased anything with the LC6000. The artists have (with Denon DJs blessing). I don’t remember too much hype around “making sure you tune in to see something special” etc. No mention of them from Denon DJ. No blurry photos that had to be put together via photoshop. No five second stingers on social media. Nothing. No official mention of them in the forums.

On the other hand, there was no way Denon DJ DIDINT know they was being used. That’s not to say it was teased. For how it was made to appear was that he broke an NDA embargo but in a way Denon DJ didn’t stop and actively let roll on.

My guess was that it was a strange-managed gauge on the new controller only models.

I guess we will find out at some point but if it’s is a pet project that will never be released, we may never know as they never said they even existed officially.