UPDATE 2 It seems there’s a serious communication gap between the Facebook Messenger team and the Facebook page team. See my last post in this thread—I was incorrectly informed, waveforms are currently only vertical. Apologies in advance to anyone who (like myself) was glad to hear the news only to be let down. The Prime 4 still looks like a monster, but I’ll personally have to hold off until the horizontal waveform option is included.

UPDATE Hey everyone—following up, I reached out to Denon DJ via Facebook Messenger and they confirmed that horizontal waveforms are indeed available as an option!

Apologies in advance for the cross-post, I erroneously posted this in the SC5000 section rather than here—mods, please delete the former.

It goes without saying the Prime 4 looks absolutely stunning! The one thing I noticed is that in all the videos the waveforms seem to only be scrolling vertically. Will there be an option in the User Pref to view the waveforms horizontal? Big up on the great bit of kit!

Some layout choices would be great, if Denon have allowed enough storage space inside (firmware/OS or whatever) to allow changes like this. It’s been a flaw in the past (“can’t do any more updates, no more room”).

I was a little cautious as this was also an.option I wanted. I use horizontal stacked and this is is just what I wanted to hear.

Horizontal is the way forward for me.

I’m in the vertical waveform camp. It’s great to have the horizontal option for other users btw.

Wow! The Prime 4 is a beauty! I’m an 8k user and love it but after some break in time I may need to add a Prime 4 to my collection!

Huys guys for the moment it’s only vertically check the answers on FB denon page !

Ditto! It actually makes me a bit nauseas. My brain just can’t process it. Maybe I’m too old. 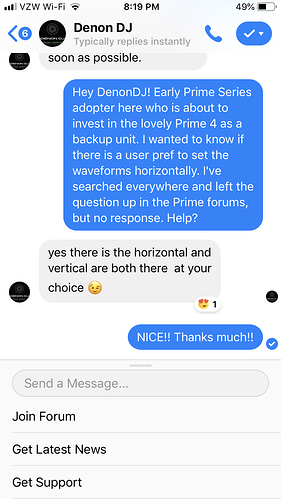 @tellor01 It seems you’re correct, contrary to what I was told 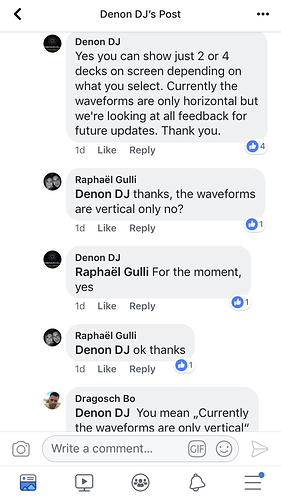 They say horizontal in the post, but I think they mean vertical. TBH, there’s a serious communication breakdown between whomever is running the FB page and whomever is running messenger that should perhaps be rectified sooner than later to prevent chaps like myself from getting incorrect info and then pulling the trigger on a preorder that now must be cancelled.

I’ve been a Serato Scratch Live and Seraro DJ user for over 12 years now and I’ve only ever used horizontal as a club/house DJ I need to see drops and breaks in the tracks precisely. Vertical doesn’t allow this effectively. I also build intros as I loop 16 beats at a time. This means the upcoming waveform will be limited if it’s horizontal.

I can see where horizontal is preferred (scratching/turntable routines is one) but as an overall mixer There s Just not enough data ahead of time. When using Ableton I can see my upcoming info.

Traktor, VDJ, Rekordbox, Djay, Torq, Ableton (or any DAW), even the preparation in Engine itself! It’s all in a linear horizontal way as a standard view as that’s the most logical timeline.

Well if the feedback is being monitored, here is my +1 for vertical stacked waveforms! How Serato do their 4 deck stacked mode is on the money.

I love the hardware and with positive, constructive feedback like this, it means the software can be shaped to benefit different types of DJ and how they play out.

Keep up the great work Denon. You listened when you read our MCX8000 improvements and build this monster that has created ripples this last few days. Let’s hope HOW we use these machines is also taken on board. I can’t wait to get mine.

You’ve only ever used horizontal but you want vertical? I think you’re getting confused…

It was a typo.

From the length of the post stating how I wanted to see horizontal, I guess it was my “first post of the morning”.

Let that be horizontal +1.

Great to see all the excitement around PRIME 4. We have been working really hard for a long time on this one and cant wait for you to see and use it for yourselves.

Apologies for the miscommunication from above. Prime 4 will launch with cascading waveform mode (vertical) only. But we fully plan to bring horizontal waveform support shortly after launch. We understand many DJs have come accustomed to this visual workflow (myself included), and we plan to add this as soon as we can.

For horizontal mode, would you expect to see a mini library as well, or just the waveforms?

If mini library was shown, would you want the list displayed above or below the tracks?

Looking forward to your feedback! Thanks!

Is there a way or option to have the vertical waveform side by side? I noticed the library section is always in the middle of the waves. It’s more noticeable in the 2 deck mode which is how majority will use the Prime4.

Virtual DJ, Rekordboxdj, DJay Pro and Serato users won’t be delighted if they can’t have the waveform lined up to speed up beatmatching.

Where is the “phase meter” ?

Where is the “phase meter” ?

My rule of thumb is to come here for official information and consider everything on FB to be gossip. Before the 5000s launched (and these forums revived) the FB mod swore up and down variable automatic beat gridding would be in Engine Prime. Two years on and I’m still waiting on that one! ha Absolutely love my setup, but that encounter from FB still annoys me to this day.

Apologies all for the confusion caused by the FB post informing that horizontal waveforms will be available ‘at’ launch. @JWiLL’s info is correct that they will follow soon after and we look forward to bringing that feature variant to you then.

Thanks for the feedback! Yes, I agree we need to show waveforms (2-deck view) without the mini library. I have written up the feature request for development. I will also add your request for the Phase Meter.

As you may imagine, PRIME 4 is the most powerful device we have ever designed so we have the luxury to build and improve the feature set over time. Feedback like yours will help us bring the features/tools DJs need to get the job done. Keep it coming!

That’s great. Hopefully that makes makes it across.

Maybe the mini library can move to lower screen area…below the wave and when one swipes left or right, the waves above will not hide/dissappear…like it does in the videos to load to a deck.

One other thing regarding stackable horizontal waveforms…I think the play head marker should not be centred.

ie right to left scrolling, playhead should be to the left, no point in having it in the middle.

Do Denon not have a product development focus group?

Only reason I ask is that I am amazed that things like this are being added after release … surely the firmware should be pretty much complete before the unit leaves the factory.

There are still some pretty basic features missing from the SC5000 a year later and Prime too.

All Prime Series products have been over engineered from a hardware perspective which allow us to add amazing and powerful new features in the future.

In most cases, we base our development heavily on user feedback. This ensures the feature set works as you’d expect it to. Also our Prime Series ecosystem allows us to add new features to multiple products simultaniously or shortly after. For instance, PRIME 4 will launch with a load of improvements and new features. These improvements/features will eventually be released on SC5000/M soon, it they are relevant to the hardware feature set.

Product focus groups are great (and yes we have groups) but you’re limited to the ideas of those members within the group. We prefer to collect the feedback from our user base to improve and build upon on product feature set released with a product at launch.