Just a little background. I took a chance on the SC5000 players this week with a really amazing deal, and I want to send a huge thanks to Denon for that. My opinions here are based off CDJ 1000Mk2’s, Rane MP2014 as my DJ setup with intermixed sequencers both hardware and Ableton 10. I also mix with Super OEM Hanpin Turntables and use Technics often. It is all mixed into mains and sound cards with a Yamaha 16 channel mixer. I use both Monitors and Active PA speakers. Although not super expansive this setup offers a lot of versatility for me. I really want to put this out there just to give Denon feedback and offer my experience in researching issues and concerns with the sc5000 in comparison to a lot of other hardware and software.

So here we go:

Sound Quality - Yes, compared to the CD running in a CDJ1000mk2 the high frequency is rolled off. But, this is not entirely a negative. You have to think that any environment you play in will most likely have a house mixer that is mixed to that space. Even the active or Passive PA setup you use will color the sound. This is Denon’s sound profile and it will evolve.They sound great; Mix the music to your space and there is no issue. Will they sound different next to another player, they sure will. Have you ever seen a mix of players in a live event on the same mixer? This is a developed system that is built to play nice together. It would be nice to have some options for adjusting this profile for different environments. Sound engineers probably do not have any issues mixing these into mains.

BPM, Platter feel and Nudge - This one threw me for a loop the first few days and created a lot of anxiety with my purchase until I put in the work to practice. There is some discussion about pitch resolution, drift, nudging and feel. So here is what my experience was. I started by setting a nudge sensitivity that felt comfortable to me in preferences, this is important to experiment with. It feels consistent in both directions, yes frequencies sound different speeding them up or slowing them down. And the anatomy of your hands also plays a part here. This is normal operation in my experience. No, the BPM number on the player does not match the exact setting of the pitch. This is true for all players and the .05 resolution does not make a difference. Denon included an extremely helpful piece of information on the display next to the BPM. It is the pitch percentage. Once you get the tracks close use the percentage to fine tune the bpm. Use your ears and practice with the ranges. I also would like to request an adjustment for the pitch bend feel, this would be extremely helpful. If Denon could make a few more preferences available to fine tune the feel and help users find these settings with documentation and tutorials, they would be doing a great service to the DJ community. Also the dead zone at 0% is 3mm longer on the negative side, this could cause some annoyance but only time will tell on that.

My final thought on the player is fantastic hardware. They feel alive, warm and unique. Today was my break through moment concerning the feel with the pitch and I no longer have worries. Traktor feels like a dead robot anymore with flat mixes and outdated sound. And in my experience pioneer gear sounds sharp, cold and flat. But for their system built around reverb and delays, this profile works. What I have seen so far is InMusic and Denon teams listening to users and professionals. Keep up the good work, open some more preferences to fine tune the feel and you have a historically great product on your hands. It will be some time before I get the 1800 mixer, but the players feel great with the Rane MP2014. They sound and feel great mixing into everything I throw at them.

I hope some other new users will post here with their experience. I do not care about the technical stuff like graphs and pitch numbers. Lets keep this about the feel of the hardware. I will adapt, practice and make music, at this time I can do that with the Denon SC5000.

“really amazing deal” how amazing was this deal you talk about?

Just look around right now. Most places have these for 50% off a second player in the US. This is probably limited offer with the new sc6000 releasing soon. By any means it is still a large investment, but in the current market of media players and what these players offer I feel it is an amazing deal.

Be sure to jump over to the feature requests and vote up my post to open more prefrences to fine tune the feel. Currently these players are pretty spot on, but with any digital interfacing device it is important to allow the user the ability to fine tune the device.

Thank you. I’m from Germany, no amazing deal for me.

Denon DJ SC5000M & FREE X1800 worth £999 while stocks last! There’s a new Player in Town! This DJKit comes complete with everything to get started. If you haven't got an Amplifier or Stereo you can add a pair of...

That’s strange. DJ Kit was the first place I looked (bought my Prime 4 there).

This is what I found: 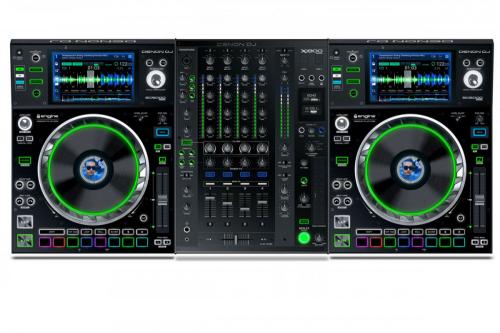 Denon DJ SC5000 & X1800 Prime Bundle, Complete Denon DJ Prime Media Player Package This DJKit bundle comes complete with everything to get started.  If you haven't got an Amplifier or Stereo you can add a pair of Powered Monitors or a...

Oh yeah. Even more of a deal hey?

I assume you’ve updated the firmware. The M’s motor-off jog bend still has no adjustment, and neither do the pitch bend buttons on any model, but I always have the buttons set to range. The non-M jog bend is now symmetrical and is adjustable, though I think the max velocity cap for rotation on the least-sensitive settings is a little low such that at the higher settings you can spin faster but then it’s too sensitive at slow rotations, while at the lower setting it’s nice and insensitive down slow but at fast rotations seems to max out quickly. In general they could probably also be slightly more responsive and less laggy, but it’s certainly useable.

I agree with others who have said the stability of the pitch increments on Prime seems to leave something to be desired. I have to move the pitch slightly in the direction I want, then slightly back – with the latter not instigating another increment change – to ensure the digit does not change again when left alone… a two steps forward, one step back when doing fine pitch fader changes. I would also like a 16% pitch range added and maybe 32%, as well. I know that’d be a lot of ranges available, but with the way the increment wobbling is working, you want to use the lowest range you can get away with.

I don’t know about the old mk2’s sound, but all the Pioneers I’ve tested at zero pitch or keylock off are completely indistinguishable from Foobar or a home disk player’s SPDIF output, and I know the processing philosophy behind the NXS2 has not been substantially changed since the mk3. If you think a Pioneer player sounds edgy, it’s more likely you’re either hearing the music as it was intended to sound and just don’t like it, you’re hearing the mixer, the sound system, the room, and/or something else. A CDJ shouldn’t be adding signature at zero pitch or with keylock off, and I’ve never heard anyone call Master Tempo ‘edgy-sounding’.

Also, if I run a Pioneer CDJ through the MP2015’s LP filters to mimic the Prime roll-off, the two still don’t sound the same, and while Prime’s got a bunch of ultrasonic garbage up top after the initial roll-off that’s likely to degrade downstream performance all by itself, I think the other measured issues are the larger contributors to Prime’s sound than the roll-off or even the ultrasonic garbage, though they’re obviously not ideal, either.

Subjectively-speaking, I find Prime harder to hear what I’m doing at a given perceived volume compared to other gear with keylock off or near zero pitch with keylock on. I also strongly suspect the compression/limiting and intermodulation distortion from all the sample rate conversion back and forth probably contributes to more hearing fatigue and tinnitus, possibly worse, both at a given perceived volume compared to the competition and as a result of having to turn it up louder to hear better into the ‘warm’ mush, blurred transients, compressed microdynamics, and general mild distortion slathered all over its sound.

I would also not be surprised if it turned out Prime’s lossy music decoding was inferior, too, but I’m uncertain. I know all the other brands I’ve tested seem to be using similar, decent MP3 decoding to one another mostly indistinguishable from any common home computer software decoder, for instance, and sometimes I think Prime’s MP3 playback sounds particularly poor in comparison to all these, but that could just be the degradation of Prime’s baseline processing just heaped on top of the already-modest little MP3. I’ve even occasionally thought MP3s on Pioneer, though, sound about as good or even better to me than a lossless version of the file on Prime. That’s not entirely implausible since an MP3 encoding compared to the original file slightly band-passes the signal, slightly compresses it dynamically, and adds a slight distortion throughout… all of which Prime’s current baseline processing is currently doing.

Nonetheless, I do agree in the long run things are likely to improve, at the very least because InMusic seems to be listening. We also get to do wild and crazy stuff with keylock that you can only see on software, even if it comes with the baseline degradation on top of it. So those are two positives.

Thanks for the dedicated response. Jump over to the link below and up vote my feature request.

I just want to keep this thread about the feel of the players and the joy of mixing music. It is really important to offer fine adjustments for any digital interfacing device. These players feel great and sound great. Inevitably your mix should balance itself out with any sources like external gear. I am truly brand agnostic, if I mentioned my impressions of sound it is just that. I really enjoy mixing on pioneer gear, modular gear, analog devices and computers. My favorite mixer right now is a 2 channel Echler. The Effects loop is so muddy under the channels and the low end is really weighted, but the mixer has a nice feel and changes my sound when mixing faster in some deep techno. My rane is really transparent in the cue and effects loop and the meters are spot on, but it is a little boring to mix music on sometimes.

I really hope some of these posts make it to the dev team. I do not need to offer data to them, they already have that information and feedback. But it is important they understand these devices are so smooth we need the option to fine tune them to our individual anatomy. I will not be around this forum much longer, but i do have some interest in a few other Denon products. It would be a shame to compare all of these amazing devices apples to apples. Each little machine offers something unique, it is up to me to find the personality of each one. These companies just provide access to the tools. Hopefully InMusic is just setting the foundation and they remain dedicated to sharpening those tools. Who knows in a few months technics could take another stab at a new media player.