Recording from X1800 direct to computer, only one signal

This post was closed and reopened. I have problems recording on audacity. I take the signal through the usb 1 port but only the channel 1 gives me a signal, the rest of the channels do not get the signal. Does anyone know why?

Yes, the master output is on 9/10 and in Audacity you can’t access that as I think you want. You can record a multitrack recording with deck 1 at 1/2 deck 2 at 3/4 and so on and the master at 9/10. it’s smart because if you aren’t satisfied it’s easy to edit and make a new mix!

There is a video somewhere about this by I think it was Ethan Leo but I can’t find it. Very informative. There I learned this way of a “walk-around”.

Do you use Mac or Windows?

For Windows, use this extra info, but you get some audio already, so be sure to select 9/10 like stated above:

Nothing. You need to take it up with Audacity. The X1800 Prime works. What if you select and record from the Realtek interface? Error 9999 seems to be very common with several possible solutions, but it seems only a few are successful. Some seem to have problems after Win10 build 1803. I hope you have updated to higher than that old build, however they talk about making this setting active: [afbeelding] ^^ CONFIRMED: if I set it to off error 9999 appears! It even mentions something at the …

MAC. it is not the same?

The Audacity error 9999 was only under Windows10.

Ch9+10 is master, so that’s the same for both environments.

I use Loopback and route like this to fix this annoying issue. 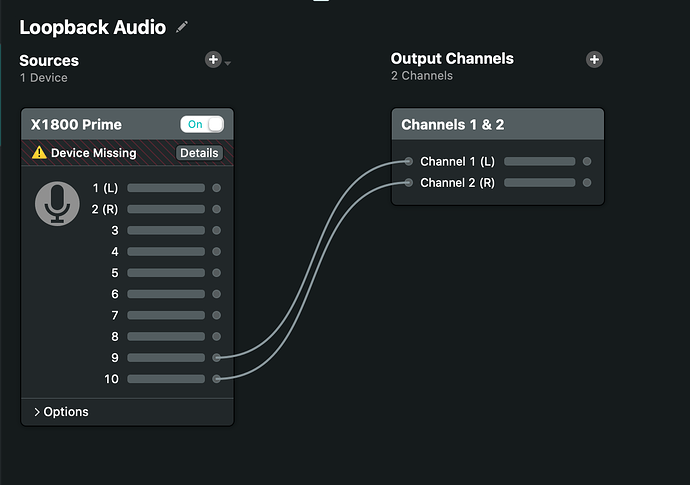 Have no idea why people do workarounds if you just want the master signal recoded - just use the free version of Rekordbox.

This still looks easier then Vietual DJ. The usb routing of decks on the screen to a usb channel on a mixer seem to be as much about random clicking until it works. Loads of rubbish of Selectibg deck channel number left, deck channel number right, a driver for each of those two, a channel (again?) and another channel again.

And after all above it never seems to work again next time until you have gone through all they clicking above again. And no useful screen tips or hints. This is why virtual is so much more home based than other software and cheap. Never seem to behave same way twice ever