… just a quick question to all… what about a display mode to remove the BPM,waveforms and key indicator… so your like flying blind??..would make it more fun???

just a thought for an option?

@Reticuli: come on in!

You may need to start a feature request for this

Hi there. I’m relatively new to the forum and have only posted a few times so apologies if I am doing this wrong or this topic has already been covered, but I’d like to know if anyone else would be interested in an option to hide waveforms and BPM on screen

Here’s another guy’s request, too. https://community.enginedj.com/t/hide-waveforms-and-bpm

What is the feature or ability you would like to have? Standalone GUI Editor for PRIME Series How will this feature help you and others? You can Skin/Edit the GUI as you want. You need a bigger Library view … OK - shrink the player, You don´t need the needle search - Then hide it to get more room for other things. The Fonts are to big ? - Resize the Fonts like you want. You don´t like the colors ? Edit it in how you like it. You want other icons or gfx ? - Download the Icon/GFX set from the…

Why would you want to remove the key indicator?

Changing layers to mimic this is a no-go because then you can’t operate the layer you want to with the track playing.

As for leaving it in Utility screen, clearly that would preclude seeing the whole waveform at the bottom, changing key, or using the browser. Another swing and a miss.

Tape… hah hah. Won’t work, because the screen area has multiple purposes. I’m surprised anyone would even mention using tape on the screens. You can do it on a CDJ-900, but that method’s not going to be useable on Prime.

And probably the fastest & easiest way to get a version of this in the firmware code for InMusic and also satisfies the people who want to change the moving and whole waveform colors to deal with color blindness:

How about an option to leave your car at home and ride a horse to work, or remove central heating and use a flint and stone to heat your house?

but kradcliffe… u made me laugh…

But a GUI editor would be a nice thing to have… so one can decide what to have/not have on the screen.

When keylocked, I don’t find a wrong key showing up to be very distracting as compared to bpms or moving waveforms. When it’s wrong it’s pretty easy to hear that clash and doesn’t harm my ability to do anything instinctively when keylock is off. We don’t have the ability to change key continuously, lock to a spot other than zero, or at all from zero even in whole increments until analysis is finished. So if you really want to be completely freed up from the key analysis, all you have to do is turn keylock off and the key showing up on top will be wrong for most of the real estate of the pitch fader. With the last link up above, though, you’d be able to change the key to black if you wanted.

Maybe a controller mode view (just like how it displays when connected to serato). On the flip though, some users are requesting for moving waves in controller mode as well. 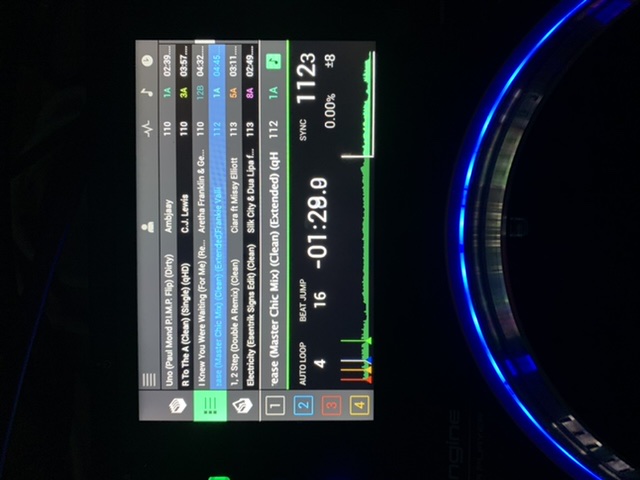 That wouldn’t be too bad without the sync and with key instead of BPM. Easiest way to change firmware now prior to outright full on-screen HUD customization and/or a specific Beast Mode is simply ability to change the colors of anything you want on screen. Every color of everything on that screen has a code already. Hold shift, tap the thing on screen, change the color(s). Black background with black item and it’s now gone. Step two, IMO, is then add the Owner’s Lockout by serial (also needed on the mixer). Then they can work on the customization and specific modes… controller view for the masses, Beast, whatever down the line if there’s still interest and ability to do it.

Come on let’s be serious, aren’t you exaggerating a bit?

Come on let’s be serious, aren’t you exaggerating a bit?

No, they’re exaggerating a lot.

There’s some advice given out on forums and YouTube channels, which says “if you don’t want to read comments about certain things, don’t look at those comments”.

Good advice: if you don’t want the BPM showing up because you’re such a superstar DJ and you want to prove to mates that you can mix without a BPM display, then just don’t look at it.

If you don’t want the sync/phase meters because you’re such a superstar DJ and you want to prove to your mates that you can mix without a sync/phase dissolution, then just don’t look at it.

If you don’t want the waveform because… everyone join in, you know the words.

The reality is, I’d welcome this decision to remove current things from the prime displays IF something else could easily be put onscreen in their place but, if you free up 2 centimetres by 1 centimetre on screen by not having the bpm display, what could be squeezed in that “reclaimed” space? A track title? No, an artist or group name? No. Slightly bigger album art? But wait, if you find a bpm display distracting, then bigger album art would surely be even more distracting.

I’d vote for this IF something useful could be found to fit into the same screen space, but so far, nothing.

That wouldn’t be too bad without the sync

There is no sync on the display or Are you suggesting deactivating Sync on hardware as well?

A reasonable request will get some traction.

Eg A Request for LIBRARY MODE view (Like when using with Serato) and you can polish it by pointing out that it gives more library information, more tracks, and will also reduce going back and forth between crates etc.

VDJ, SDJ, RBDJ, Traktor etc all have a view like that.

It says SYNC right next the BPM in that pic. And yes, I also want to deactivate it so it can’t be turned on at all and then use Owner Lockout to prevent the screen options from being changed in the install and sync from being turned on.

Oh seen. But you can’t activate it via the screen. Its to tell you if it’s active or not, similar to the zero point indicator on the pitch fader .

But you can’t activate it via the screen.

Didn’t think it could be. But not needed on screen at all if it’s locked out.

I I personally don’t like that idea I would rather have a way to trigger samples to load them either to the touch screen on the prime 4 or to the pads like in serato and also a way to control your lighting from the touch screen as well so you do not Need the computer at all except for back up purposes that would be way more useful what do you guy think??

Denon can hardly get the software for the unit itself to work bug free so asking for a DMX controller to be built in as well really is pie in the sky.

That’s the reason I still use the MCX8000 with VDJ as you can assign DMX commands for ShowXpress to custom buttons for your lighting and it’s all on one screen.