Just hooked up a brand new LC6000 to my Prime 4 and I am beyond impressed with the results and ease of use. One question: I’ve noticed the blue and green LEDs behind the buttons (cue, play, sync, etc.) are very dim, and I can hardly tell the difference if they are engaged (lit up) or not. The problem is especially noticable with the green color. Is this a known issue, or is it my unit?

I’ve got the same setup and also noticed the same led experience. I can’t find a brightness setting for this. My prime 4 is much brighter, but would also be nice if I can dim the unit just like lc6000 or adjust the lc6000 to a brighter setting.

Is this only while on USB power, or is it like this when you have it plugged into the wall as well?

I think this was also brought up in another thread but I believe in Denon’s attempt to make the players look more ‘pro’ they may have made things a little TOO understated for some of us. I personally miss the 5000 player’s look but I might be in the minority. It would certainly be nice if we had a bit more control over button brightness. Maybe in an update down the road?

Hi all, i buyed two LC6000. At my first test i see the problem about the Button Dim Color. Its very difficult to see whisch status any buttons have. For example the Vinyl Button or the PADS. I used Google and found this Thread. I see its from 2021 and i hoped it gave a fix. But here is not a fix postet. Ist ther a way to dimm the “off” Buttons more?

Yes, the leds are too dimm.

The difference from sync on or off is barely noticeable from the button yeah. Its the same on 6000 units

If this is the case for you than you have already upgraded LC6000 hardware. I can see a noticeable difference between my SC6000 and LC6000. SC6000 is absolutely fine for me.

If you have both devices can you confirm that sync buttons are equal in design ?

No I sadly bought my SC6000s too early not getting tons of free stuff -.-

Same for me. I own my LC6000 already 15+ month now so I thought you have a more updated LC6000 hardware version

I have LC’s and SC’s but the SC’s do not have the problem for me. Tomorrow I will post some pictures from the difference of the buttons. Maybe newer SC’s have the same buttons like the LS’s and therefore the same problem.

Interesting, maybe it’s even worse with (only your?!) LCs then.

Looking forward to see your picture so we can investigate this further.

When did you buy your gear? My SCs were bought May 21 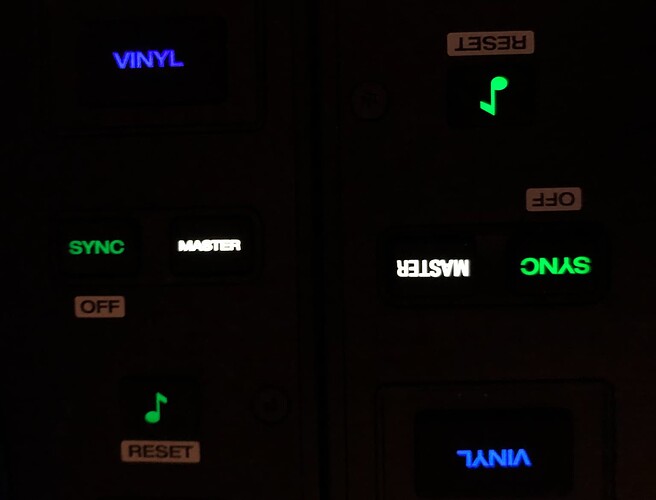 Oh I thought its the same platform completely, wondering why they would add all this custom design to LC6000s…

This is a good question but only Denon DJ could tell us what is behind.

Must have been a change in buttons in the supply chain.

My buttons are the same between SC and LC, but I can’t be an example in most cases.

This brings some light in the dark. Do you have the bigger or the smaller text variation ?

Both small. I’ll try and make a photo, but my LC is ehm old.