If you're thinking about getting the MC7000, think twice about whether you need this piece of s*it. 🤦🏻‍♂️

Because even Denon decided that they don’t need this controller🤦🏻‍♂️

I never really liked pioneer products (although I owned several), well, I don’t like their approach to the organization of controls, the shape of the buttons and the overall performance, so I decided to try Denon during the next upgrade, which is the main competitor of pioneer on the market. I was looking for a 4 channel controller, before that I owned a Vestax VCI-400, but alas, it was stolen. After evaluating the performance of the vci-400 in a metal case, I was looking for something similar. Reliable, indestructible and functional, and the choice (unfortunately) fell on the MC7000. If at that time I understood the real state of affairs with the mc7000, I would not have bought it even at gunpoint.

There is a lot to say and everything is on the case, but first things first. You need to start right away with the fact that there are no problems with my laptops (I have several of them, 2 of them on windows10 and 1 on macOs), so I’m sure that the problems are in the controller and its firmware.

So, first, a few obvious disadvantages, not directly related to the operation of the controller:

Well, now let’s move on to the most “sweet” thing, what made me write this detailed post, full of condemnation towards Denon. Gods see, I don’t like to criticize anyone, but in this case I’m just furious👿 So, in order. Brand new mc7000 was bought for a lot of money, looked reliable and well made, was flashed with the latest firmware v1.2. For some time (about 2 months) it worked fine, and then the devilry began.

By the way, I also tried firmware 1.1 Channel faders work with it, but the play button still does not function correctly (((

Summarizing everything written, I can say with confidence that the MC7000 is a disabled child who was abandoned even by his parents, mom and dad Denon🤣 And yes, I really, really regret buying the MC7000.

You are selling a product that musicians work on. Buying a controller for such an amount, I expect that I will earn my bread on it. I count on him not to let me down in front of the public (as he did twice​:man_facepalming:t2:), ruining my reputation. I, as a user of a denon product, am counting on support for my product, on a normal firmware. I don’t want more “dancing with tambourines”

Hey Denon, can you give me some advice on how to sell your brainchild now to hell with a broken play button and crooked firmware, so that you can buy a normally working product and stop wasting your time and energy on a “horse with a broken leg”?

I own that shitty controller the mc7000. And I spent over $600 dollars fixing it for it to break again. First problem. I upgraded from the mc6000. The 7000s fader failed me when cleaning it with and air can. ? Don’t know what happened it just stopped working. Ordered a better one and replaced it myself. Not a big issue. But still $100 bucks. Then the cue and play buttons as well as a few effects buttons started failing. Granted I dj every week. At least twice a week but within a year and a half it’s not working anymore so I ship it off to a Denon certified repair shop in the US. And it takes a week but $500 bucks to fix. Now the unit just out of nowhere starts to make noise during playback. A distorted noise. I have to reboot the computer program and cross my fingers to see how long it will play without doing the distortion sound again. I was djing at an event outdoors in the summer and had qsc k12 speakers Nice and loud from the stage I was on and put on a long mix so I could take a break. Soon as I left to get a bite to eat and check the festival’s entertainment I got calls on my phone asking me to hurry back to the stage the speakers sound like they are blowing up. Aside from the embarrassment it made me look like an idiot and a dj with shitty equipment. One part is true the Denon mc7000 is shitty equipment. I now have the Prime 4. But I’m still gun shy to wonder with in 10 feet of my set up. Denon should thank me for spending $800 the initial price I bought it when it first came out. And then another 600. $1400. For a controller that sits in its case in my spare room collecting dust.

a little less than 2 weeks have passed, and the faders on channels 3 and 4 also started to work incorrectly, the scenario is the same as on channels 1 and 2🤦🏻‍♂️

If you’ve managed to break all four faders in just over two months - when the majority of other people are using their 7000 for years and years without even one fader issue, I’d be looking at the more localised potential causes, rather than something wrong with the build or longevity of the hardware.

Also, if the product is only a few months old, and was bought by you, new, then you should have a warranty. I’m not sure they’ll swap all four channel faders as normal wear and tear (I’d believe one fader, maybe two faders at a big stretch)

oh, I understand you very well🤦🏻‍♂️ this controller let me down twice during operation. And if these were events like friendships or weddings, where a technical malfunction can be understood and forgiven, I would not be so upset. But, alas, these were marketing events in “jackets and ties” by a serious Phillip Morris brand and an equestrian international show jumping competition, right at the awarding stage🤦🏻‍♂️ I was fined by the employer and did not invite me to these events anymore🤷🏻‍♂️

I have only spent money on buying it so far, but how to return it now, that’s the question​:man_shrugging:t2: it remains only to be content with little, selling it for spare parts at a bargain price​:person_facepalming:t2:

so the fact of the matter is that everything is fine with the faders​:rofl: I described the problem in detail) physically the iron faders are in perfect order, but for some reason the latest firmware from Denon v1.2 makes the faders of my controller not work correctly. Lowering firmware v1.0 and v1.1 fixes the problem with the fader, but the right Play button stops working​:man_shrugging:t2: moreover, I’m sure that everything is fine with the physical button, because it worked fine with v1.2 firmware

I am almost sure that all these problems can be solved with the release of a new firmware, taking into account all these situations. I’m sure that there are people who still believed that the mistake with the faders was iron, and ordered the fairers and soldered them. working faders, replaced with other working faders, spending time, money, nerves. but, this service has been stopped, well, it’s damp, yes, eat like this​:man_shrugging:t2:

BTW "To Reset: Press and hold the SHIFT and BACK buttons on either deck at the same time. This will restore all hardware settings back to the default factory settings, and power cycle the device into normal operation. " OMĢ, how i can do it myself? 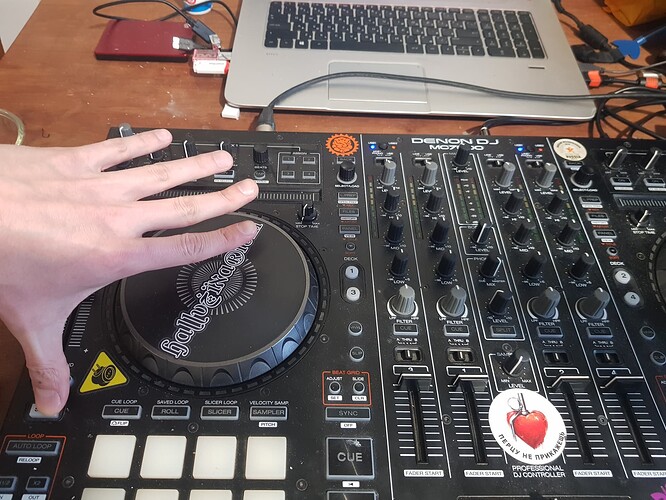 ahah, but a new problem, right just this morning was formed. Deca 1 and 2 passed out🤦🏻‍♂️ serato plays the track, the master signal indicator in the software works. but the sound from decks 1 and 2 is not gone. and the indicator on the controller does not display it, and in fact it not gone🤷🏻‍♂️ 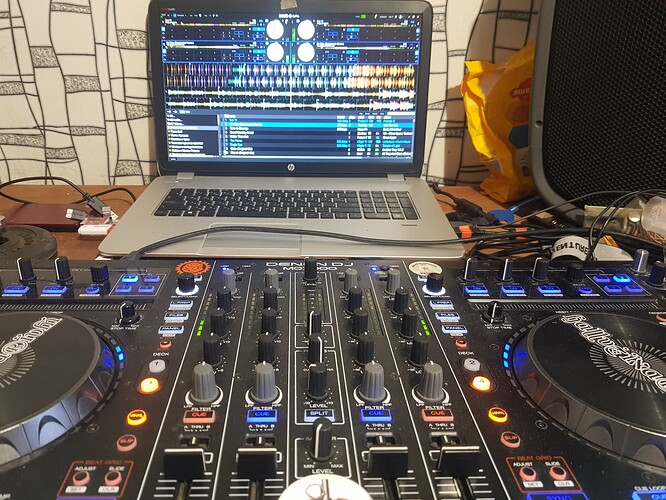 Wow. That ■■■■■. I would have been ■■■■■■. My failure was at karaoke Night.( my side gigs). And a few club nights, I got through it with the VDJ program. Anyway I kept the info on the company that fixed my MC7000 and the issue with the cue and play and effect buttons. As for the distortion issue I had I never tried to get it fixed or download any drivers. I just gave up and saved up to get the Prime 4. After dropping $800 (total) I wasn’t spending anymore money or time on that thing. I had just bought a new flight case (). Didn’t fit the Prime 4 of course Here is where I got my unit fixed 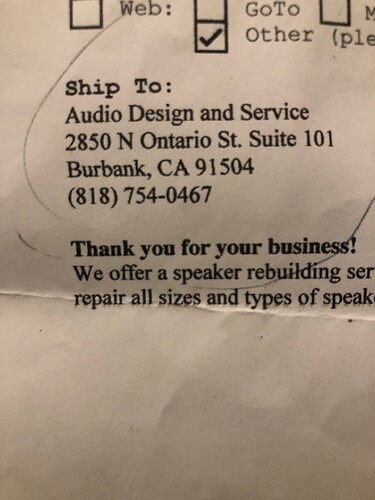 I love a good rant.

Unfortunately, this one isn’t. Probably just a case of worn out microswitches under the play/cue buttons (club I used to play at usually changed them every year on the CDJ’s).

You are right regarding the Denon ASIO drivers, they are poorly written and require your win to be optimized to function with low latency (without pops and cracks in sound). Still better that win NI drivers for their audio interfaces though…

The rest is most likely some issue with SeratoDJ/midi but considering you did not bother testing the controller with Traktor or VDJ who knows, you don’t seem to be the type willing to troubleshoot issues.

I know several people with the MC7000. It’s absolutely rock solid as a controller. Suggest you look at how it is treated and the PC it is operating on as they could possibly be the issue.

regarding the Denon ASIO drivers, they are poorly written and require your win to be optimized to function with low latency (without pops and cracks in sound)

I’m with @kradcliffe on this. You could be pushing the limits on that older model HP Envy. Check Serato support for system requirements and laptop optimization tips.

The following optimizations for Windows are suggested and highly recommended for a better experience using Serato software on your PC. Note that many of the settings below require that you access t...

I will try to do this​:fist_right:t2:

I have the mc7000 and the prime 4,the mc7000 the Last 4 years no problems, using with vdj, serato, traktor, is a beutifull controler

Well to add fuel to a burning fire. If you don’t like denon goto pioneer. They have problems too. Go take a look on their forums. Let’s take the sx range problems from day one that pioneer knew about. Bring them up on their forum and you get suspended… at least here at denon the staff although many would disagree do actually read this stuff and act upon it. Just because they can’t do something straight away doesn’t make them useless. If when you hit the play buttons noises comes out what is the problem… Research is often people’s downfall they either don’t research it OR rely on social media (Tracy on facebragtwitpage from Blackpool that knows everything) and buy something that they don’t actually need and can’t use properly so it must be faulty. Sorry rant over

Hi, GerbertS. There is nothing particularly difficult to replace CUE/Play switches. I do it two times on my MCX8000. Here is the link where i was buy 30 switches for $1: https://aliexpress.ru/item/1328488051.html It’s compatible with your 7000. 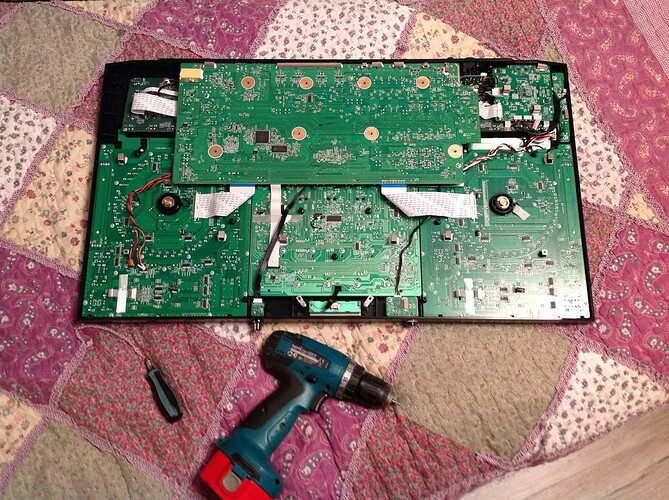 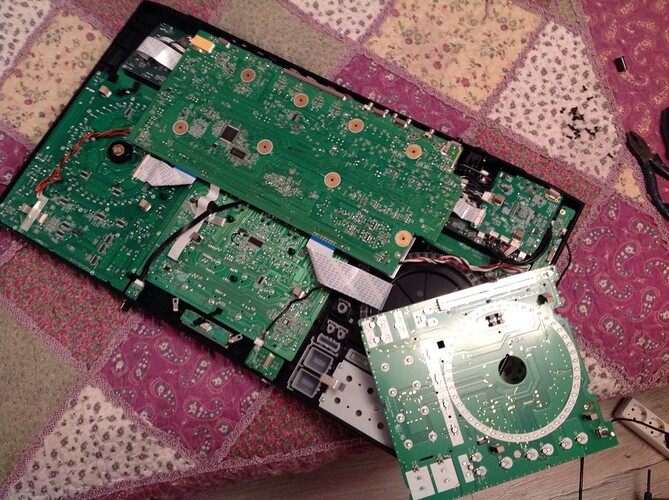 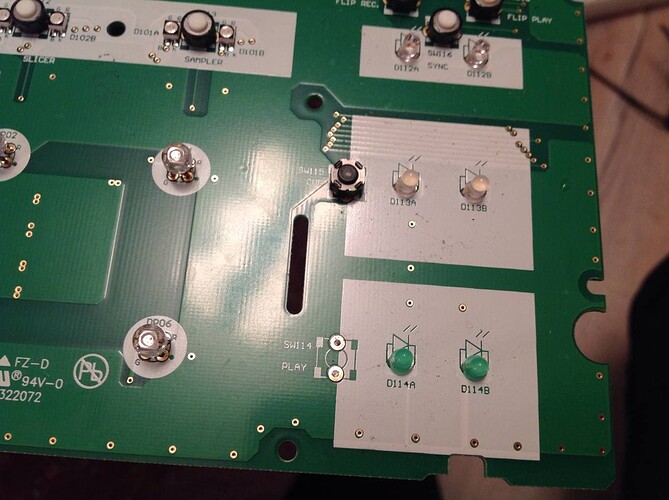 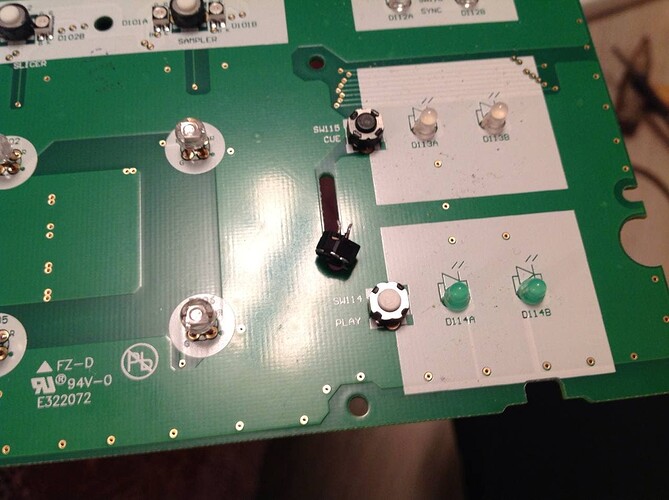 If you cannot do it by your own hands you can go to any TV/Audio service (not mobile phones service), i guess the cost for switches replace up to 2000-2500 RUB.

No i have not