DJs all over the globe requested them, we listened, and then made it happen! Along with a new Console Status bar for improved workflow, and user adjustable Nudge Sensitivity for the jog wheels, Denon DJ is proud to announce 1.3.2 Firmware update for PRIME 4!

In addition to these amazing features, we’ve also taken a big step towards improved BPM analysis on PRIME 4. Now, if your tracks already contain BPM metatag data, PRIME 4 will use that BPM value to set the beat grid. A feature coming very soon to the Engine Prime desktop software for all collection imports.

Qudos to Denon for listening to their users, this looks brilliant and makes me excited for the next SC5000/X1800 updates

@Nekoro_DenonDJ: Will Engine Prime also get the feature that it keeps the metadata (BPM etc. from say Serato)?

So when we are going to have the ability to turn on the WiFi and start streaming music?

Woooh amazing for the Prime 4

Now, if your tracks already contain BPM metatag data, PRIME 4 will use that BPM value to set the beat grid. A feature coming very soon to the Engine Prime desktop software for all collection imports.

Just to clarify (and perhaps I’m interpreting this incorrectly), does this mean that, for example:

If so, this one helluva game changer.

Good move, makes it even more attractive. If you guys make a Prime 2M, count me in.

Please don’t forget the SC5000M/X1800 is the flagship though! It needs some TLC too!

This changes everything. My mixes are finally on point without having to constantly beat match by ear (younger DJ’s may know nothing of this).

Tried it already for an hour and works incredibly well now. One thing I’ve noticed is that in the Horizontal Mode, when your songs are loaded and you turn the Library knob now, it doesn’t automatically take you back to the Library view like it did in Vertical Mode.

Guess a feature request then.

Is it not possible to display only two decks? IMO the vast majority of DJs still work mostly with two decks, so having four taking up precious screen space is not good.

Talking of precious space, is there any way of having a browser on the bottom half rather than huge waveforms? You know, more like the usual DJ software layout? Two decks and a browser below.

Also (and this is true of the vertical view too) why are only the track titles displayed? Where’s the artist info? Does nobody else think the screen should show artist and title for each deck?

I would really liked to have seen this update on all Prime platforms at the same time (Engine, P4, SC5000/M) to keep them in sync

PRIME 4 will recognize any BPM metatag data that’s already embedded into the track, by iTunes or other softwares.

Is it not possible to display only two decks? IMO the vast majority of DJs still work mostly with two decks, so having four taking up precious screen space is not good. 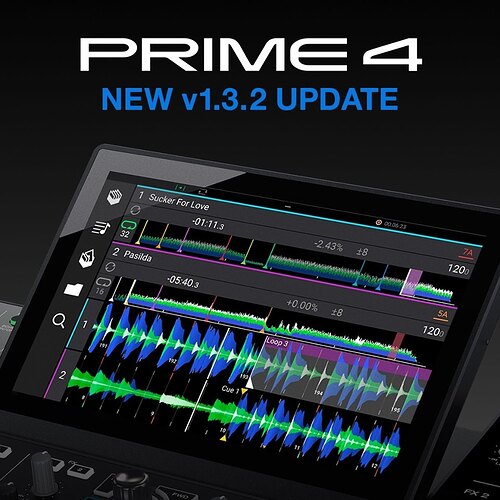 That’s a lot better. Looking at the four deck layout I did imagine that it’d make more sense to put the two decks one above the other to provide width - enough to display both artist and title, and both elapsed and remaining time. So much wasted space there with no artist and only one track time readout.

Denon could even get some cover art in there. Genre, year, rating…loads of missing stuff.

We still need a browser rather than huge waves though, IMO.

Ideally we’d be able to skin the GUI ourselves, so we could really personalise it…

Hey @addie, you can disable you 3rd and 4th deck by holding SHIFT and pressing the DECK 3/4 button. That’s a simple override you can use. Additionally, 4 horizontal decks will only show if you toggle between DECK 1 & 2 or 3 & 4, or load a track into DECK 3 or 4.

I’m looking at the same thing, I think it is meant to say “Update Firmware Reboot”, and not restart because like you say there isn’t a restart.

I used the Mac updater, as I have it plugged in via USB anyway for easy transfer from EP to the SSD.

EDIT: Oh yeah, I’d edit the info files for the Mac & PC Updater versions on the https://www.denondj.com/downloads page as they take you to the USB information page instead of the computer application update information.