Engine DJ version 2.2 for Desktop and OS is here delivering new features and plenty of fixes and improvements to our DJs.

Leading the charge is the new Active Loop feature which enables users to set up to 8 Active Loops on either Desktop or direct on Engine DJ Hardware. FX Control has been expanded for Numark Mixstream Pro users and Metronome comes to the Desktop.

Download now and read the full release notes at www.EngineDJ.com/downloads 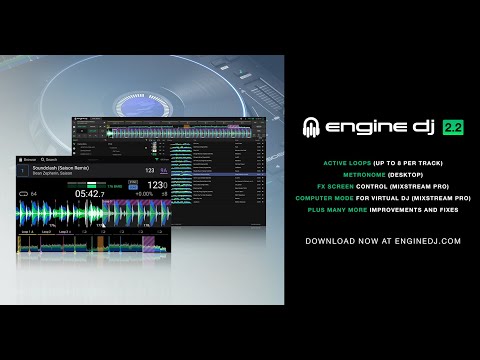 When is it going live?

LOVE IT! thanks very much!

Very nice & very handy, thank you so much!

Hopefully the OS is just around the corner with the requests we’ve all been waiting for.

*So this is OS too. Majorly disappointed. I thought we would have seen one of the most requested features added, like more information on screen (the one I really wanted), or dual waveforms across players like a lot of people have been asking for.

Starting to lose hope these will ever be implemented.

Will VirtualDJ support come to the Prime GO as well?

Interesting improvements, but I for one really need the ability to search inside playlists or prepare lists etc. I.E. if I’m currently viewing a playlist, tapping the search button remains in the playlist and only looks for tracks in it. If the browse button is pressed first, then the search button, The collection is searched, as currently.

After I updated the two sc6000, my sc6000 with ssd kept restarting. with the x1850 switched off, there were no restarts.

After i reinstalled the 1.5 firmware of the x1850 everything worked again.

A lot of love for the Mixstream Pro.

. I can’t honestly think of anything else needed, at least for my use. Looking forward to trying this out shortly.

Hi team, thanks for the update.

this appears to have fixed an issue I was having with my brand new DENON PRIME GO, I have not heard one pop or click in the audio since the upgrade.

Brand new PRIME GO - clicks and pops in output after upgrade to Engine v2.1.2 when loading, but v1.6.2 is fine Standalone Controllers

I have a brand new DENON PRIME GO purchased on Monday. It came with Engine version 1.6.2 out of the box. It worked OK with a bunch of test flacs on an old spare Class 10 16GB microSD card in an SD-adapter I had lying about to test. I upgraded it to v2.1.2 over wifi when prompted with no issue almost as soon as I got it. After the upgrade I noticed when analysing or loading tracks (more frequent with analysing, but happens just with load), occasional faint clicks or pops appear in t…

Thanks for the feedback. Would you mind sharing more information with me via DM so I can take a closer look?