Can't use an External Lacie drive to store music to be used for importing to Engine DJ?

And then Files and folders displayed this (as full disk access)

Is the drive showing up in finder??? Is it correctly formatted??

Yes, absolutely. Use it with Final Cut Pro and a bunch of other apps no problem. Just when I drag and drop to Engine DJ, even though I get the “+” sign, it just silently ignores it.

Mmmmmm weird. You have obviously clicked the padlock and entered password etc (screen shots show that you must have done) have you got a usb stick you can try. Also you have given engine read write permissions. It wont hurt to check. It should go with giving full access.

What format is the drive formatted as?

Tried restart, tried reboot etc. Is there a log file I can view any errors in ?

There could be the issue. Try making a partition and formatting it to exfat.

Do you have thunderbolt?

You’re not doing anything wrong, and this is not some kind of bug!! In Denon’s infinite wisdom they decided to REMOVE support for APFS/HFS(+)/NTFS files systems on External Library Drives. It worked prior to 2.0, but like I said, they removed that support. Haha, they said they removed it so we wouldn’t get confused…even though with every other music library out there that supports these files systems, their users don’t seem to get confused. Yeah, that’s a load of BS!! Anyway, you will have to join the rest of us in begging, err, I mean, requesting, that they bring this functionality back. I mean, 7 months ago, they did say they were going to bring it back in a forthcoming update, but you know, it’s been 7 MONTHS, so I wouldn’t hold your breath!!! You best get to transfering your entire library onto the internal drive. That, or use a Thunderbolt drive as Mufasa is suggesting.

That, or use a Thunderbolt drive as Mufasa is suggesting.

Some LaCie’s have Thunderbolt support.

Looking at the image of the one posted, I suspect it may have thunderbolt 3 but I could be wrong.

@RichGreen i will suggest connecting via the thunderbolt3 ports before reformatting. 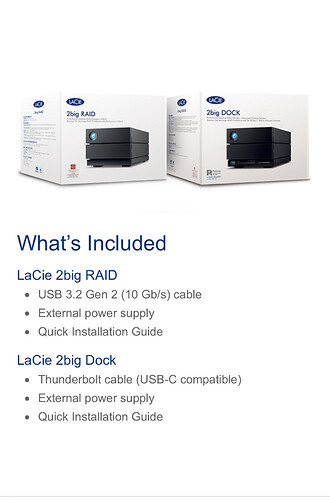 FWIW, it is a thunderbolt drive, and there is NO WAY I’m going to reformat as it’s not just got music on it but video editing files (raw) as it is so damn fast…

I thought I was going crazy but this is absolutely nuts. I am fuming !! I did try another app which actually seemed to work in adding the files to the library (lexicon?) but of course to actually complete the export required the paid / monthly subscription so there was nothing that made it look as if Engine DJ could not support it… and this is obvs compounded by the fact that pre 2.x it was supported.

OMFG what a load of pony trap.

Thanks all for advising.

So thanks again all for your feedback / advice. I’ve created an exFAT partition on the Lacie and then have started moving all of the music onto that. I really can’t believe how on earth this made it through QA, actually removing usual features. I mean, even a network mounted drive would be fine right ??!

Somebody thought removing mac os and keeping to fat/exfat would be a good ide.

I spose its something to do with jumping pc to mac. Pc cant read macos so they binned it off. They did talk about bringing support back but as yet nothing on that front. At least we sort of got to the bottom of the problem and got a workround for now ( not ideal i know)

OMG. I’ve just read the nightmare of the thread that is the ability to relocate files that have moved. I guess I’m “lucky” in that I’m very new to this and haven’t spent a lifetime cueing / looping tracks etc and adding all of those frills but I am absolutely shocked at the fundamentals of file management being just … missing !! I dropped cash for the prime go which I’m having a blast with but wow … just wow… talk about a way to alienate your user base.

Yup. Still they are working hard on the software side if things. Numerous updates in the last year (more than Pioneer lol) … we have to remember this was built from the ground up though and is still new (ish) … Still once you get to grips with some of the quirks you will actually love the prime series

I have a LaCie thunderbolt drive. It is formatted APFS.

My LaCie thunderbolt drive works fine with Engine DJ desktop. It has to be connected via thunderbolt port.

If I connect the same drive via USB then I get same results as you.

Numerous updates in the last year (more than Pioneer lol)

Yeah, that’s because Pioneer is a nearly completed product. Sure, they’ve got some quirks too, but nothing on the scale of Denon’s flaws. I still think once Denon get their act together, the Prime ecosystem will be awesome, but they’ve got a LONG WAY to go!!