I just want to edit the genres of the tracks, add comments, I can’t do this on Engine OS 1.4.1?

You can’t do this currently in Engine OS. You should search the feature requests section for something similar, if you don’t find a similar topic then you should create a feature request for this.

Of course you can’t do it. It’s a “standalone system”.

The beat grid can be adjusted (to a degree) on the system. That’s prep, right? Maybe you’d like Denon to remove that functionality?

Sorry, didn’t mean to start an issue here. I like the unit, but there are some obvious flaws…unlike the AKAI FORCE, which was a sham from the start, that I didn’t jump on board with returning when it didn’t do what it should, I’m not going to hesitate here on the return if this isn’t corrected next week.

They call it a “standalone system”.

In fact, possibly due to some people (deliberately in some cases?) misinterpreting “standalone”, denon seem to have phased out the term standalone and just seem to be using the term smart console.

This isn’t crazy though, metatag edit is kind of essential, if it doesn’t exist in Engine OS at this point, it probably won’t.

phased out the term standalone

Nope, it’s right there on the Prime Go webpage:

“Rechargeable Battery-powered, Standalone Engine control with WiFi Streaming” - plus the word is used three times in total on the same page.

Anyway, best of luck in your endeavours to create 300 short posts across the forum in just one weekend. Lol

I guess you didn’t bother actually looking at the page yourself, because they also use the word “prepare” too - twice. And as you said, correcting tags is prep.

(deliberately in some cases?) misinterpreting “standalone”,

He’s always giving his 2 cents … and usually gets the full 2 cents change.

When Denon use the word standalone to describe their range of Prime products, that’s a not a “point of view”. That’s a fact.

This isn’t crazy though, metatag edit is kind of essential, if it doesn’t exist in Engine OS at this point, it probably won’t.

I’m not going to hesitate here on the return if this isn’t corrected next week.

Next week? Because you’ve mentioned this week, that you’d like Denon to add this feature. Denon are supposed to drop everything and then program, test and release your feature into firmware by next week? If you’ve actually got one of these great bits of entry level prime kit then follow your logic through and take it back because I’d say it’s really unlikely your request will be functional in your prime kit by next week.

So there is currently no way to change the BPM info on the Prime GO?

Maybe you missed it

You can’t do this currently in Engine OS

The 5000 can adjust the beatgrid. Unfortunatly the GO can’t.

I would love to see this function in the prime GO. The GO is perfect for small gigs.

BUT… Also for prepping. Sitting on the couch with a Go on your lap prepping playlists and cue points. Perfect!!! Much nicer than a laptop.

Definitely. I mix mostly jungle and drum and bass. Only a tiny portion of the tacks get analysed at their exact bpm (~160bpm). Most will be analysed at half ~80bpm. For now, I actually prefer looking at the grids at the lower bpm value as it’s less cluttered on the screen.

It’s so annoying when I get to a track that’s the higher value as I keep beat sync on so I’m not having to manually and pointlessly set the bpm to match the current track. It’s most annoying as sync is difficult and unreliable to turn off - resulting in having to waggle the pitch fader up and down until it decides to work.

But, in a nutshell, it would be so much easier to be able to just /2 the bpm on-device. It takes seconds on my PC, but not seconds to turn the PC on, adjust the bpm, re-export to the SD card etc.

As others say, being able to adjust beat grids and edit meta data is the kind of thing that is exactly what you want to be doing in terms of using the device to prep.

One other point that I’m not sure where else to ask about on here, but I’ve noticed for a certain percent of my tracks that the beatgrids progressively drift over the duration of the track. I guess this is something to do with Engine Prime’s bpm analysis not being able to decipher when certain conditions are met, because the tracks are all perfectly quantised. Just wondering what anyone’s process is that they’ve developed to deal with this.

The 5000 can adjust the beatgrid. Unfortunatly the GO can’t.

Press and Hold the vinyl button. 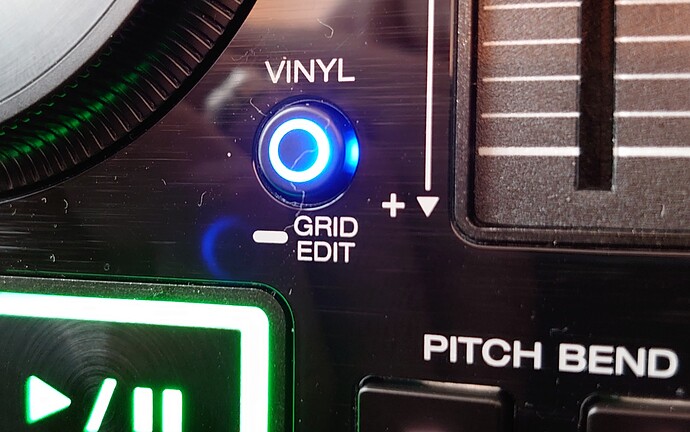