I have a Logitech MX Master 3 for Mac running the latest Logi Options+ software and the windows do not scroll when using this mouse on Engine DJ desktop software. The only way I can scroll a view it to drag the scrollbar thumb.

I also use Smooze mouse scrolling over the top, but I turned it off and it made no difference to the underlying Logitech mouse, views still do not scroll while using the scroll wheel on the mouse.

Might be worth trying a more mainstream (common) widespread availability mouse. This is another one of those situations where you seem to be the catalyst of your own issues.

Sorry, are you saying a Logitech MX Master 3 is not a common Mouse, is that comment for real??? HAHAHAHAHAHA. Which bit triggered you, the word Mac??

Seems it was an issue while the library was performing tasks.and may not be if the Library is “at rest”

Indeed, I think there isn’t anything more mainstream than Logitech. I use MX Master 2 for Windows btw.

Is this the one I should be getting and allowed to be using @Nitebeatz ? Would this make it more mainstream? Sure Logitech is common but Your own post mentioned other mouse companion apps like logi options+ and smooze etc - less standard.

Historically you’ve not done yourself any favours with things that might have “seemed like a good idea at the time” with regards to storage and tags.

It seems nice to debunk every non-DenonDJ stuff around here, but if this mouse works perfectly in a VERY mainstream application like Microsoft Word, then you might tone down this propaganda a bit.

Its good to have a discussion, but reading the latest posts of you in several topics, it could be a bit more objective.

That’s your opinion - and that’s great!

I’m not sure how long that list of apps is, but I doubt Engine DJ is on it (yet)

So in your opinion, we all need to adapt to what EngineDJ supports then? This brand would certainly be doomed, just like BlackBerry was.

There’s the request section of the forum for such things; like a “please let a future version of Engine DJ work with …… “

I can see what Nitebeatz is saying here - that is not a standard mouse. It’s a very expensive odd looking “mouse” designed for coders according to the web site. Probably ten times the price of one that might be included with a computer.

You’re also running it via two additional bits of software (apparently) rather than just the OS, so it’s not really surprising that it can cause problems.

Expensive, yes, but very good at what it is supposed to be; a mouse. It will probably last longer than EDJ 1.x and 2.x combined

. I agree that accompanied software can play tricks or could be a problem here, but Logitech Options is active on all my EngineDJ desktop (Windows) machines without issues.

I am curious, EngineDJ coders might have this ‘odd’ looking beast of a mouse in their hands daily.

I’m not a coder btw.

As a by-the-way, the last mouse that I bought is a Logitech G502. 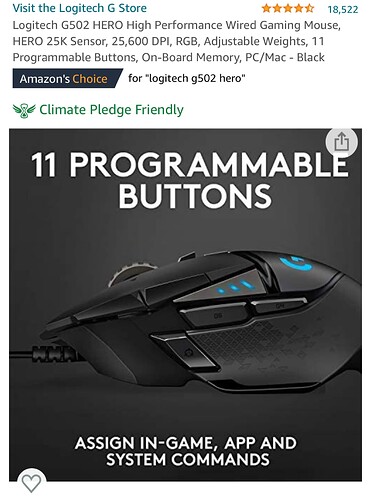 I’ve pretty much resigned myself that some of the 11 buttons will never work outside a game environment, and that the tilting of the scroll wheel will give me some surprising results in quite a few applications. Indeed, the more serious and “straight-laced” the application, the less it likes “more than usually expected” buttons and features.

So the problem with the Engine DJ not reacting as expected is because the mouse looks “odd” or “expensive”and you put mouse in quotes? Seriously what planet are you guys on

Logi Options is Logitechs driver software for their mice and keyboards, Smooze I said was on but turned off and made no difference to the scenario, it’s like you guys don’t even read. Then the @Nitebeatz refers to my other posts as a justification for telling me I’m doing something wrong and it’s my own fault

, then he shows off a Logitech gaming mouse that should also be running with the Logitech driver software. It really is amateur hour around here.

The fact that you think this is a mouse specifically for developers (the fact you called the role “coder” is very telling) you have neither a understanding of what a developer is or what a flagship ergonomic mouse from the worlds largest 3rd party input device manufacturer is.

For the record the day job is a UX so I am deeply embedded in delivery of digital products every day working closely with product owners, developers and testers.

I also know that Engine DJ is written using the Qt framework as a cross platform SDK which can have issues of its own manifesting into issues like this.

Looks like I bumped into the mouse brand wars reddit by mistake. I could have sworn I clicked the link for Denon DJ. Oh well…

The MX Master 3 (I have one myself) is a HID class device just like any other mouse, so it works just as well as any other mouse, but I’ve had mixed results using mouse middleware to add bonus features, so I generally use it vanilla, without installing Logitech’s additional driver software. Can I suggest you try that first @custa1200 to see if the problem is related to Options+ ? It will help pin down whether there’s some interaction between Options+ and Engine DJ, or not. Last time I looked Options+ was in Beta - is that still the case?

Yeah not sure how I will go about removing the Logitech drivers but I might give it a go later today.

No that’s not what I said. You’re very much enjoying twisting things aren’t you?

I said it’s not a standard mouse, as did Nitebeatz, just before you also mocked him.

you think this is a mouse specifically for developers

No, as I wrote (please pay attention) the Logitech web site describes it as such. Therefore, it’s common sense to assume that if the manufacturer calls it such, then that’s what it is.

It’s a mouse for (home)office, creativity and development… so ehm for everyone?

This is getting of topic. We all had our say on the matter. Hopefully DenonDJ will support more mainstream hardware.