Any plans to improve the sound quality?

Features wise - love the whole lot - touch screen, integration etc all great. The “computer” side of these things is fantastic.

However, the sound quality is simply not as good as my old set up. I’m running this through an Ohm BR/TRS system with 8kw of Matrix amps and processing with a Behringer DCX2496. This is a good PA system. I’m using the same files as on my SC2900’s, but with the new set up, it sounds like it’s rubbish compressed music with all of the warmth and dynamics removed. It sounds like I’m playing from my phone using a cheap headphone lead that I bought from Poundland (sorry to non-UK readers - best example, cheaper than Walmart!)

I really love the features and I’m a big Denon fan - I want this set up to work, but it simply does not do the job well enough at the fundamental level of playing music.

Is there anything official somebody can tell me that will reassure me that the sound quality can be and is planned to be improved in the near future? I’m ready to send the whole lot back and get a pair of Pioneer and keep my Ecler. I’m completely serious here. I’ll pay a bit to send the units back and the Pio’s are more expensive, but the sound is simply not good enough.

If there’s something coming, then I can hold off, but it needs to come soon.

Nice PA. Like that Nuo, too… I think I told you that before. Sorry, I’ve been away doing school work last few days. Hope you missed me, y’all.

Not sure heavy reading is going to answer the question. I think the only party in all this who can answer is Denon DJ, and as far as I’m aware they’ve not yet promised substantial further changes to the playback or mixer firmwares’ audio.

i hope denon dj goes a light up and make a answer to this thread? just be honestly,…

Edit: … and make sure you have the latest firmware

Yeah I have the latest firmware

It’s somewhat hard to compare a fully analog mixer like the Nuo to the X1800 in terms of warmth. Personally I have a Xone DB2 + SC5000’s and the sound quality is very good!

Of course, pairing my SC5000’s to a mixer like a FF6.2 or even a XONE 96 would improve even more the overall sound quality

Well I’ve got a bit of time before I need to send them back, so I’m going to run the players with my Ecler on Friday night and see if I like that sound. If I do, then that’s great and I can just sell the X1800 (or keep it and keep my eye open for any firmware updates improving the sound). I really love the features of the SC’s, but the sound has just soured it a bit.

It’s strange! I have no issues with my Xone DB4 and the SC5000, yes it’s not like the best DAC and transparent like Topping DX7S or MATRIX Dac but it’s sound good enough with my dynaudio BM12 I agree that Denon need to improve sound and processing in their own SC5000

The Behringer is as good a dac as any dj gear. Again, dacs aren’t the issue here. When I connect the Prime system all digitally into a dcx, you see the analog outs aren’t holding Prime back. The digital maths and code in the middle appear to be the Prime signature(s).

Once the event starts, switch to full Prime and really give that integration a whirl. You might find the combo’s sound not so bad to justify not having those features. On really minimalist music and super loud volumes, I don’t think it will seem so bad. When you want slightly better sound, you can also turn key lock off.

Reticuli, your knowledge is always great reading. I dont understand half of it, but you are a dedicated person and there shall be room for you as well.

Hope you missed me, y’all

Well, using the X1800 tonight and to be fair, it doesn’t sound as bad as my memory of it. Part of my problem would be the difference with my Ecler which was always going to be a thing going analogue -> digital.

So far, so good and keeping it at the moment.

I tried some meagre a/b/c/d testing using my Mackie D.2pro, Sc5000M and Traktor pro2. Everything is routed through Traktor via the mixer except one for analog standalone (at a flick of a switch).

The mixer is a little unique for it’s age because it could perform quasi-side-chaining or multitrack recording even off software playback (dvs). It’s kinda like the hardware version of the once upon a time serato/ableton bridge. It was my Traktor/Propellerheads Reason bridge.

With this setup I can perform numerous realtime simultaneous tests. So far I’ve only done listening tests and 0 pitch comparisons. 0 pitch holding is the same for all so far and there is a minute difference in sound. I find it in the mid/low range on the denon to be different than Traktor. I don’t really find anything that I would call an unsatisfactory difference between the 2. When I have the time I’ll use Reason’s analysis tools for testing.

To give the players at least the benefit of the doubt you’ll want to use 24/96 test signals to rule out sample rate conversion to 24/96 as causing any of what you’re seeing since you can’t turn that off right now on the players. You can get any DJ software, even Traktor, to start misbehaving if you force it to do real-time SRC from like 44.1 to 96khz such as when you play a 44.1 file and have the audio interface set to 96khz. You’ll also want to go SPDIF out to a SPDIF input on a computer to rule out the DA and AD conversion steps if you just want to see what the players’ processing is doing.

You don’t have to play an RMAA test wav, record it, and have RMAA analyze it to see issues. Just play a sweeping test tone like the one linked below and you’ll see distortion even with a 96khz source sweep on your analyzer. Not good. I can imagine the added garbage is probably part of the reason downstream gear is sounding dry and not quite right. Amps and drivers do not like that kind of stuff… high frequency harmonic distortion and especially ultrasonic. 44.1khz sweeps look a lot worse, and changing the pitch with keylock off produces louder distortion harmonics than other DJ software or players.

I see what you’re saying. I’ll give a shot to testing as you described but first I wanna go through all of the real world applications such as can I mix between these sources at zero pitch and all sources are in time or if the sound difference warrants worrying about EQing all the time when mixing from different sources.

I would hope that people or sound geniuses would have suitable processors in front of their amps and I would hope that speakers manufacturers build suitable circuitry to keep it to it’s specified frequency range and response.

It’s the real world, man. If you can invent amps and drivers that can handle a ton of high-frequency distortion and ultrasonics being pushed through them without the performance going down the drain, the industry would love to have it. As a general rule, the makers of source equipment are responsible for the first link in the chain… and if it’s a weak one, there’s not much you can do to correct the overall effect. By the way, other players and DJ software don’t do this stuff. I ran the same sweep through Traktor with it forced into 96khz mode so it wouldn’t have to do any SRC, and it did not do this stuff. The recording looked exactly like the original sweep file in the spectrum analyzer.

I still suspect that on the players, all that might be necessary to fix the sound is this…

to avoid the limiting being necessary in light of Elastique, and then this…

to avoid all the SRC… specifically having the layer’s processing and SPDIF both switch to the track’s sample rate.

I’m not exactly sure why these distortion harmonics and IMD that appear to be from SRC still happen on 24/96 files… as if even those are being subjected to SRC, and not just any form but a particularly-inferior variety (even for real-time), to boot. If that’s the case, then that’d mean there’s another SRC stage bumping back down from whatever it’s processing at to the 24/96 SPDIF out. And if that latter’s the case, that might explain why the analog outs seem to sound slightly better in some ways with good-enough analog mixers compared to the SPDIF out.

It’s the real world, man. If you can invent amps and drivers that can handle a ton of high-frequency distortion and ultrasonics being pushed through them without the performance going down the drain, the industry would love to have it.

That is why I said this

I would hope that people or sound geniuses would have suitable processors in front of their amps and I would hope that speakers manufacturers build suitable circuitry to keep it to it’s specified frequency range and response.

Until Denon improves sound quality wouldn’t it be good to know if and how to keep things sounding like it’s on par with each other?

The “if” is you can’t. Once the signal’s fouled, it’s fouled and you can’t subtract the distortion magically, in the same way you can’t un-burn an apple pie. 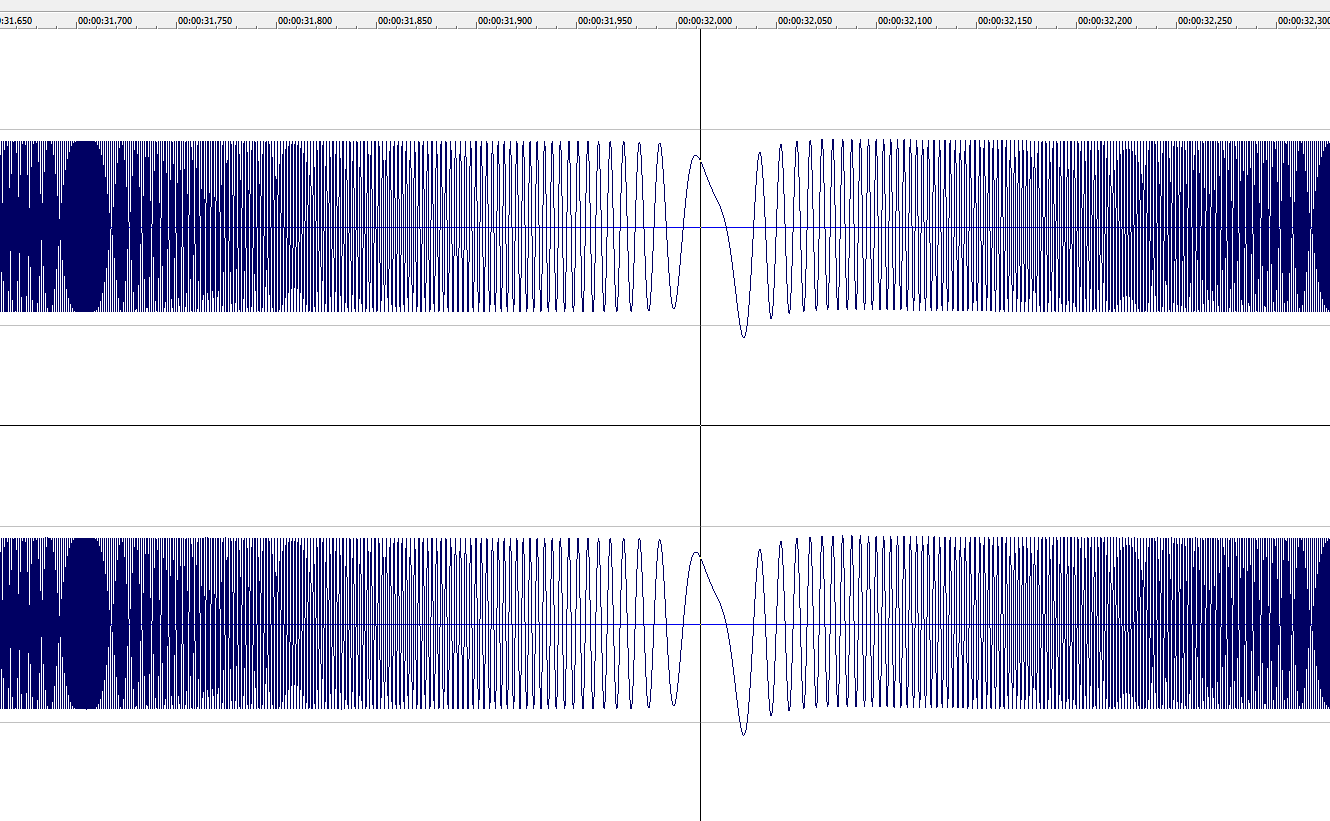 And then there’s this extra chunk of ultrasonic garbage at the end that doesn’t exist in the original test waveform: 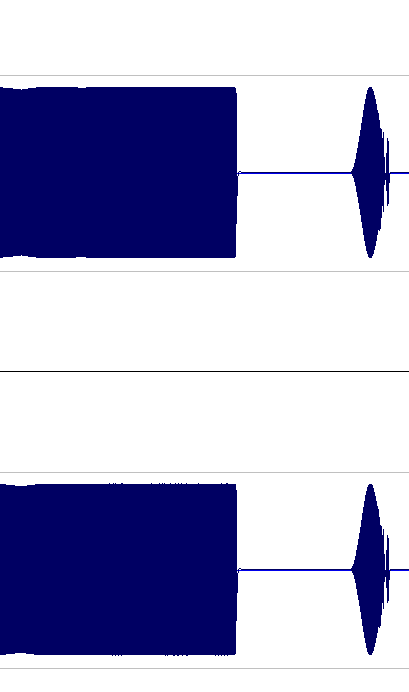 It’s hard to say for sure, because my Tascam interface might be to blame running at 192khz and analog, but the frequency range appears poorly up to about 40khz, so it may not even be really 192khz sampling rate playback, anyway, which would go to 90ish. It looks like barely 96khz + distortion. However, the SPDIF out does something similar with a chunk of ultrasonic stuff after the roll-off, too.

32bit/192khz support seems to be a bad idea, anyway. Who’s going to play dance music in that format? SPDIF out can’t support it, they may not be fully preserving the bandwidth, and if they just supported up to 96khz, had the -6dB pad, and ran the layer and the SPDIF out in the sampling rate of the track then most of this distortion I suspect would go away.

Here’s Traktor and then the Prime playback with that 96khz sweep track, no pitch fader movement of the other youtube video: 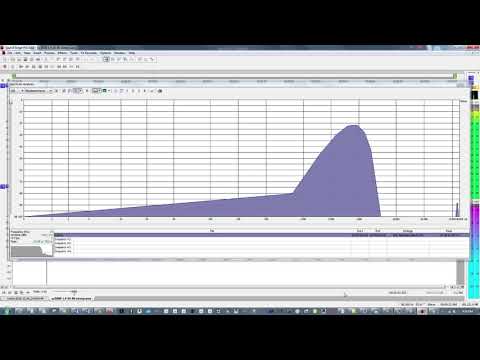 Cleaner than the 16/44.1 10khz tone swept from 100% to zero in the other Youtube video, but still pretty freaky on Prime playback compared to Traktor.