What format do you use on external hdd/ssd?

As the title says. I got an external 1 TB hdd (not ssd) for christmas and thought of using it as an USB drive, but the only options for format is NFTS and exFat. To convert it to fat32 I probably need to use terminal and commands to force that happen. I doubt a lot of people know how to do it that way so was curious how people sort those big ssd/hdd on their players? I don’t want it to be an internal drive in my sc6000. I’m also not sure how good fat32 is on such a huge drive.

It really ■■■■■ we are are stuck with NTFS and fat32, given that the Engine internally runs on linux; we could have used something like ext4 or others.

I do not think it is really hard to reformat an external drive in fat32. Plenty of free tools exist and if I recollect, windows partition manager allows you to format it.

Personally, yeah, I am one of those that format on the command line (CLI) to fat32.

What format do you use

I know what it says, but exFat and fat32 has their limits and I’m not sure I like having such a big drive in one of them.

EDIT: Btw my disk can only format to ntfs or exFat. To make it fat32 i prob need to force it

Nope. I prefer ExFaT to FAt32 any day.

why do you think you don’t have the option on windows to format your 1tb to Fat32 ….I think it’s best reserved for storage smaller than 32gb eg a small flash drive.

As you start analysing tracks, there is a db file in the engine Library that starts growing in size.

In previous Engine versions my db file was 20gb in size….that would not have been possible if I used Fat32

I know what it says

Then why are you asking what format to use?

but exFat and fat32 has their limits and I’m not sure I like having such a big drive in one of them.

He clearly did say WHY. In the same sentence.

The fact is, Denon clearly state which format to use. There’s no need to question it.

Yes but then the question would be: stick with usb or not. So that’s why I asked

Make sure you are using a mbr format and not gpt. I assume that’s what denon wants as I don’t have one or have I read what it requires but from every thing in general always needed to be mbr.

Fat32 is actually capable of of doing up to 16tb you just have to swap the 512k emulation and change it to 4K idk what drives allow you to do this still in windows technically but it is possible doing it thru Linux tho then you can make it work for 16tb mbr fat32 allocation size for windows or any os.

That’s for ones usually over 4tb this also usually gets around the limitations manufactures say that you can’t do past 2tb a lot of them say that I’d use a ssd for sure.

Id use this select the highest allocation size for you hard drive if you don’t understand what’s going on read this article. 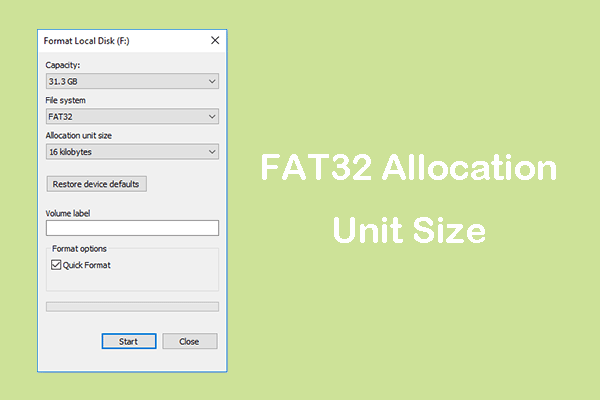 What Allocation Unit Size Should I Use for FAT32?

I personally use aomei then I’ll make sure it’s mbr set it to fat32 ill delete the actual partition run it then I run format quick fill all ones and zeros personal preference on this but makes things easier.

Then I’ll use fat32 format. If you run into a issue of it not formating on fat32 it doesn’t mean it’s not possible it means that you need to do something else possibly example wd has a tool specifically possible to make this work sometimes when it won’t on fat32 mainly because it one agains changes the 512b emulation to 4k

I was mainly stating that reply for the prime 4 using the Sata drive option.

Thanks for the allocation tip and partition table tip. But one should not put the allocation unit super high either. Your files will then have to align to that block and you will lose some space.

There is a balance to these things. But yeah, 4k has been the standard allocation unit for a long time on most file formats I think. certainly all my drives in linux use 4k on ext4 and btrfs.

I know what you mean I am not concerned with that as it is faster (easier) to access the data with bigger chunks over smaller. Me personally I would be using wave format which is bigger file sizes and why I would also use higher allocation but every one is different.

It’s because I have seen to many dsps alone freeze up because it used flac and the amount of processing power it takes to decode and encode to wave takes away from the hardware cpu which could be utilized better in the gui. This seems to cause problems with units freezing from what I have learned as most don’t even realize it. Of course software optimization always helps a ton.

Me personally I would be using high res audio from vinyl rips for mixing and I believe since most companies expect people to use aiff or mp3 or flac or wave (uncompressed) or some other compressed format which is fine but Ill never use a compressed format again. I haven’t read what it takes but I am just stating overall formats.

Like I said it may not take a lot of time to do on the change fly but it also robs the cpu power I assume ram and other things best thing to do is use a ssd and find out if there is an actual way to disable the hdd going to sleep like you can in windows. I also assume the platter drives causes a issue with freezing.

I assume most people will also use over 80% of the drive itself even on ssd user dependent of course. I am sure you know this already but for others who read this in the future to have a knowledge base It actually slows it & down best way I have learned to make things the most optimal on ssds or even platter drives is to actually have a new wiped drive partition included and then load all the files all at the same time this way it will actually properly categorized them correctly unlike it does when adding and deleting. there couldn’t be any fragmentation then.

I hear all the time people say you don’t need too trim but for example. Every little bit helps as far as where did I get the idea of how starting to delete the partition itself instead of just doing a quick format well I have done a few crystal disk mark tests and had speeds that were slowed down still after a quick format but deleting the partition fixed it why I have no idea.

As far as flash drives go it is probably just some of the things I wrote above as well as the drives that are not fast read and write speeds as they all run different speeds. Just because it is usb 3.1 doesn’t mean the drive is outputting the max speed as I know a usb 3.1 can do up to 1gbps from my external nvme on windows crystal diskmark. But that’s just me I have 0 issues on other electronics and I am sure this is no different when ever I get one I will def be trying 4tb & 8tb 3.5 just to see if it works and recognizes I don’t have a 2tb ssd but I can always get one but if a 4tb will work i will get that as for me personally I don’t like to use any more than 50% of the drive for head room but that’s just me being ocd.

And as we all know heat is a big factor as well as hard drives in general only have a peak speed for a specific duration so its best to try to keep the drives cooler which a ssd would be more beneficial. I would personally make a mod out of the prime 4 and added a external fans to for intake and out to exhaust heat out of the unit as well as see what other thermal upgrades are inside it to decide to do proper upgrades as necessary but that’s just me.

If its possible to use a thermal paste I am gonna use thermal grizzly kryonaut me I would use the extreme for better thermal its super thick though. If it has pads then I would get better ones of those instead or add them if the weren’t on places that could be used for better cooling.

Hope this helps some in the future though.

I was under the impression that fragmentation is an issue on platter drives because of the head needing repositioning, plus wait for the sector to rotate to the head. I could see it having some effect with solid state drives, because of searching non sequential sectors would still incur some penalty, but it really should be minimal.

Thermal control - I build a small scale energy efficient computer last year with no moving parts. Not even a fan on the CPU. For your SSD, if the door for the bay is metallic, you could put a thermal tape, and then add copper plates, to such thickness so as to make contact with the bay door. These small copper plates can be bought online. This would evacuate the heat nicely. If the bay door is plastic however, no point. It’s all about surface area for passive heating as I am sure you know.

As for USB, yes, even if it says 3.1 it may not achieve that speed because what matters is the internal components how fast they can go. And because usb sticks are viewed as temporary storage, they rarely have good components. So many of them are utter crap.

I have prime go, so cannot use an SSD internally, although I could use an nvme in a usb enclosure…forgot if the prime USB is 2.0, 3.0 or 3.1. I prefer the SD card as it does not stick out and I find them more reliable than usb sticks.

To answer your question - I´m using ExFat on my 1tb ssd.

I have a 2TB Samsung 980 Pro NVME in an enclosure formatted to Fat32. I had to go Fat32 because I still regularly play on CDJs, and they don’t support ExFAT. I used Rufus (Windows) to format it…took seconds. You don’t have to make the drive bootable when using Rufus.