I’ve just updated to 2.0.1 on my Prime 4 but now my SD card is not compatible so I need to update on the desktop then sync my playlists again I’m guessing?

It only gives option to download the software and reinstall and I’m conscious if I do this I will loose all my work, analysing, cur points, playlists etc.

Is this to correct way to update the software and will everything be as I left it afterwards?

And will I just need to sync my playlists again to my SD card?

Just to add when I last closed down Engine Prime it did a full backup so I’m presuming when installing the latest version it will retrieve that backup and all will be as it was?

When you update the prime 4 It will see the database on your SD Card and ask you to migrate it to the new 2.0 database.

The old database remains on the SD Card, you will not loose your cue points.

Ok great, but then what about when I update the desktop Engine Prime software does that then install from the backup dons on the previous version?

Now it’s saying my SD card database is corrupted! needs to be reformatted!

However all the folders are showing fine it’s just the Engine Prime playlists that have come now!

Really concerned I’m going to loose all my work!

How do I do this?

It’s the same thing on desktop. When you install engine 2.0 and above it will create a new database and leave your old.

So what I’ve noticed is if you push the SD Card into the port and obviously it’s on W siding so let’s say you push it in but not quite far enough first time so it springs up. This is what had corrupted the SD card making it unreadable to my Prime 4. At first it just did it on the playlists imported from engine prime software, but the folders were showing. I just tried putting it in again and by mistake it didn’t click in properly and now it doesn’t see any of the folders.

If I look at the SD card on my laptop all folders are there fine!

This is extremely sensitive that it will corrupt or stop reading an external drive or card. It happened to my 1TB internal drive after just 1 day when the USB cable accidentally pulled out at the back from the ending prime software.

This is way too sensitive, is this normal and the same on other controllers such as Pioneer?

Ok so how am I going to use all my previous analysed tracks and playlists if it’s not going to look at the old database any more?

I wish I hadn’t updated as I currently am here with a corrupt SD card and no way to use my playlists created on 1.6.2 on the updated Prime 4 which is 2.0.1.

Still unclear on the steps I need to take in order to preserve all my analysed tracks and playlists done in 1.6.2?

When you say create a new database and leave the old one, will I be able to import the backup created in 1.6.2? How do I do this?

When you update to 2.0 you will use the new engine dj app.

You will have everything of your old database and all changes made after the upgrade are only written to the new database.

Please use the search function here as this topic was discussed several times already.

Ok thanks appreciate your help here!

Just to make it clear, engine Dj 2.0 will automatically ask you if you want to migrate your old database to the new one (leaving the old one where it is) You don’t need to deal with backups for that.

Try exporting with the new desktop app on a new SD card or usb stick. That should work.

I have no problems at all with that.

Ok so I reformatted the SD card, installed Engine Prime 2.0.1 software, exported my playlists to the card, exporter folders I have as backups to the card.

Everything is now on the card.

However, now when I go to the Prime 4 it’s reading nothing at all, no playlists, no folders, nothing! 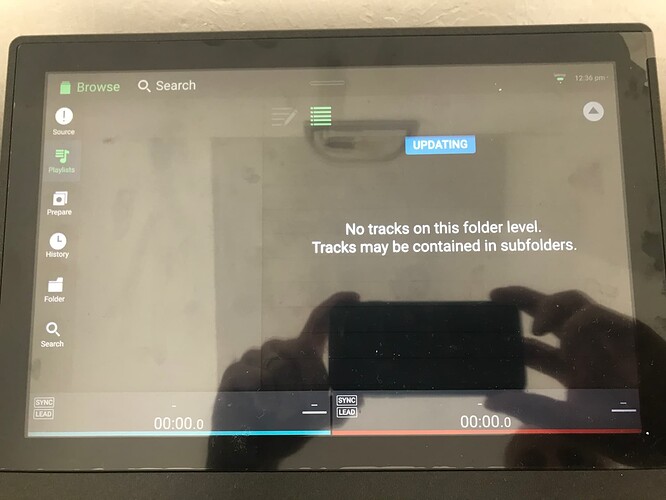 exporter folders I have as backups to the card.

How did you export folders?

I didn’t export folders I just copied them across from my laptop drive. I have these in case my playlists suddenly don’t work.

Anyway here’s a screenshot of the exported playlists, in the new 2.0.1 (when engine loads up it confirms that version and the icon is now black) 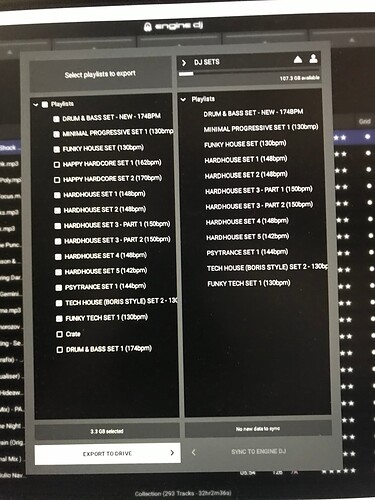 Also should there be a blue UPDATING label per mantle showing on my Prime 4 when trying to view tracks?

I just copied them across from my laptop drive

I didn’t export folders I just copied them across from my laptop drive. I have these in case my playlists suddenly don’t work.

Keep it simple otherwise things will get confusing

I have these in case my playlists suddenly don’t work.

You could do this with a separate sd/usb …so it will be a back up.