Three things about the Prime Go to consider

Really great little unit. Still getting used to the workflow of the touch screen for playlist creation (not easy). The ability to use the jogs for moving the grid is good, trying to figure out how to increase/decrease spacing (from analyzed BPM) on the unit though. Here are some things to think about prior to buying:

1: Slow manipulation of the jogs in vinyl mode makes and odd stuttering sound. Jog sensitivity settings don’t fix this. Might be a deal breaker for me…

There is a lot to like with this unit. There are a few serious issues as well. Time will tell if these can even be resolved. Btw, the pitch faders can lock in even at 20+ with very little nudges, it’s kind of amazing. Other than the pitch faders not registering a the ends, and the up faders having a very sharp slope right at the 3/5s range (which can’t be adjusted), this thing shows promise. I hope that Denon sorts this stuff, and the waveform displays aren’t terrible easy to read. Just wanted to detail some of the issues I have observed. Overall a pretty good job.

Slow manipulation of the jogs in vinyl mode makes and odd stuttering sound. Jog sensitivity settings don’t fix this. Might be a deal breaker for me…

That could be cue mode, especially if you don’t hear a sound until you move the platter

No, I know what cue mode in CDJ mode sounds like, this isn’t what I’m speaking of. And I changed every setting related to cue in the unit just now to see if I missed something. Same thing.

Crossfader slope can be adjusted, but the cut in is terrible (3 mm from each side), anyone have a fix?

Yeah, get a better class device. This is a LOW END prime device, if you want high end then your need to spend more cash and get something like the X1800 mixer. Honestly what do you expect for this device? If you think it’s a device for scratch focused DJ’s then frankly you’re delusional.

This is a matter of user preference.

I am well aware that this is not a scratch machine, but if there was no intention to make it at least possible, then why even have a crossfader? Also, I understand it is “bottom of the range”, but that shouldn’t preclude it from being a good standalone. Do you work for InMusic?

Crossfaders are not just for scratching. I’m sure they were used on DJ mixers before scratching came along.

why even have a crossfader?

Although Crossfaders didn’t come out before scratching, they’re for anyone that wants to achieve the same as lowering one upfader at the same time as raising another upfader, With just one finger / hand. So great for club mixing DJs who have one hand on lighting or video controls and only one hand spare for audio fading, or useful for wedding DJs with one hand holding a mic and the other hand fading between two audio channels etc

Some late 70s mixers even had timed crossfaders where you could set 1 to 30 seconds for the crossfade duration and it automatically crossfaded in that number of seconds. Obviously not much of a crabby chirp would be happening in a single 30 second fade

If you want a smart console with a battery, here’s the one. If you’ve got power , there are many other specialist choices, including mixers that are As dull as ditchwater, have almost no features, no buttons, no lights, few controls, but a crossfader made from concrete

With just one finger / hand.

Odd that … since us old hands were always able to handle two upfaders with one hand already LOL. Granted, not with one finger. But with the position and direction of the cross fader that hand is pretty much void for other things anyway.

The only place I have found it convenient is if in the early part of a gig, where it’s more or less back to back “background” music and you don’t have or want to use autoplay lists. But only when combined with fader start option.

If you plan on doing a lot of things (EQ, filter, FX) then the crossfader with fader start is also the best option to have that hand free to do all those things.

On some software you can even set it so the crossfader switches on cue listening on the track that is “off”. Especially handy when you are doing that impromptu pool party on your iPad

I was just about to push the button but decided to go for the Prime 2 instead and im glad I did its perfect for me, once I thought about it I realized the Prime Go is actually very niche in my opinion and doesnt offer much over the much more useful Prime 2, I think its more of a portable preparation and practice device to complement the full SC/X range and/or the Prime 4 than a super serious week in/week out performer.

Dont get me wrong I still want one, just cant justify the price for the use it would get lol

Dont get me wrong I still want one, just cant justify the price for the use it would get lol

I think the price issue has a lot of folks hesitating, especially in today’s situation. That said, I do believe that the Go is not primarily a week in/week out performer as you said, but more a prep, play around in the backyard or on the couch and take with you on your travels kind of unit. I have been on planes with DJ’s spending hours with their laptop (ever used one on one of those plane tray tables?) trying to prep stuff. The Go would be great for those situations. Now you can actually try out stuff using jogs and such.

But yeah, the money … ouch.

Prime Go is the best thing for outdoor events with no outlet power and no generator power. The battery and no laptop is why I bought it. There is only 1 other battery powered All-in-one DJ controller and its not where as good. Prime Go sound quality is pro level and work flow is solid. Everything mentioned in the original comment doesnt effect me as a outdoor DJ.

Combined with battery-powered PA speakers this is undeniably the biggest unique selling point for DJ’s that have jobs like that. Very few “in the wild” weddings here in Holland, so never been a big issue for me, but I can imagine that just bringing two stands, two PA speakers and your Go for that beach wedding ceremony makes for a quick getaway once done to return to the venue for dinner and such :-D.

Again, the only thing holding me back atm is a 95% drop in income due to Corona and not having sold my DDJ-SX limited GOLD edition yet LOL. 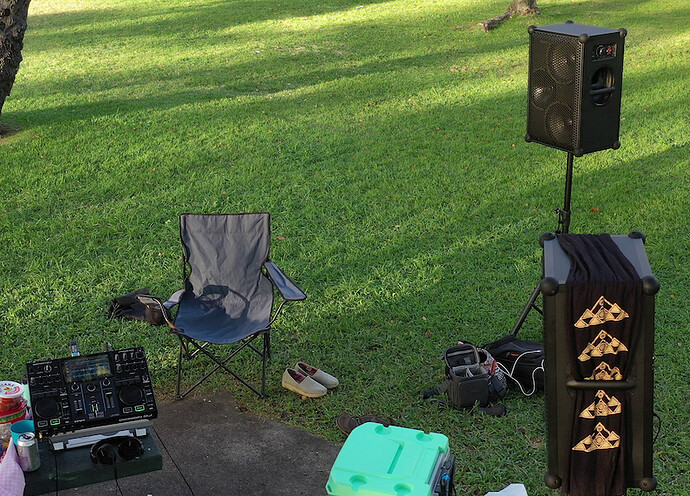 Sunday tunes in the park