The Shoot-Outs have begun

The question is, with the 24bit/96kHz audio quality, would you guys usually prefer to run the analogue outputs of an X1800 or do you foresee accessing the digital outputs instead? Do you have any experiences to tell about using either output source in your DJ gigs? 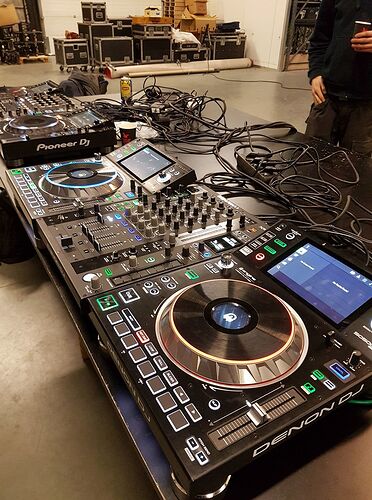 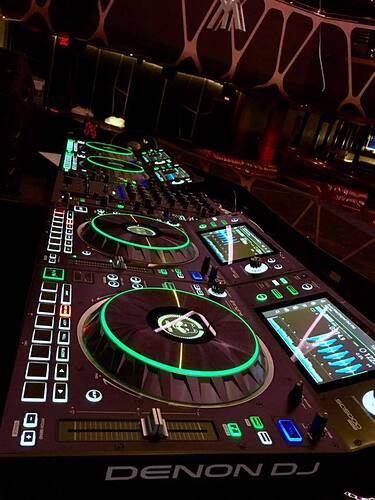 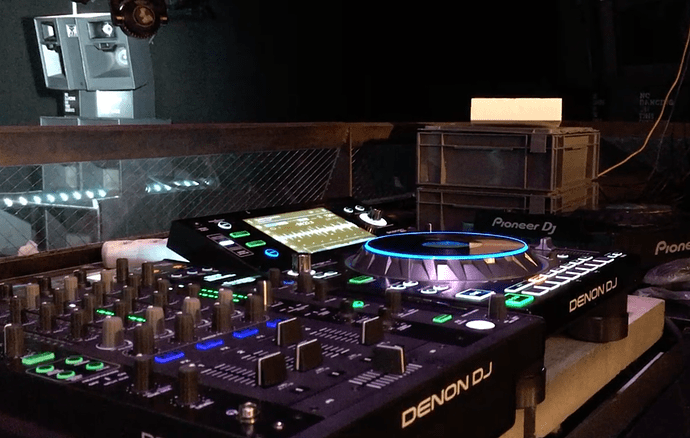 With my current setup that has both analog/digitial i/o, I primarily use the digital out of the player to the mixer, and then the analog outs (XLR) from the mixer to the main audio system.

Same here. I run analog and digital inputs. I like to have a back up redundant cabling system. XLR outs to the PA system. Digital out for recording.

I wonder… Is anyone running DIGITAL OUT from their Mixer to their sound system/PA, instead of using the XLR master outs?

So what were the results in the end? Both the nexus and 1800 have 24b/96kH cards. The analog outs have always sounded better on the Denons to me; probably due to Denons association with A and H, but is this quantifiable? Or just personal preference.

How do you win these sorts of arguments?

What output you choose should be based on if the mixer or amplifier has better DACs and or if there is anything that could cause enough interference between the mixer and the amplifier. I personally will probably be using the digital out in my set ups.

That’s like comparing cameras based on the amount of megapixels. Marketing terms taken from tehnical specs that offer little real world information about quality or performance.

One informed user posted a review of MC3000 controller that perfectly indicated why you get good sound quality from denon gear (LONG READ):

I’m really disappointed by the lack of attention sound quality is given in reviews - I’d love half a review to be purely on the colouring, like reviews of amplifiers or speakers. Sometimes (and I’m not commenting on your point makar1, just chewing the fat), DJ reviews just cite the resolution and frequency (“this is 48khz/24bit so is as good as it gets”). This is like evaluating a car by stating how high the speedometer goes. In my opinion sound quality is the invisible elephant in the room that no-one realizes affects them.

He later compared S4 with MC3000 based on his experience:

Additionally, because of the independent power source and the analogue internals, the mixer is unphased if you unplug the laptop while feeding an audio signal through one of its analogue lines. Having the digital technology as auxiliary to the analogue audio functionality that is central to this mixer seems a major engineering strength. Like all good audio equipment, you run this mixer hot to get the best sound out of it. The beautiful, silky rich bass reminds me of my best Vestax mixers. You can hear Denon’s heritage in the engineering immediately. It is also built like a tank.

The MC3000 does more than passthrough, it contains active analogue circuitry on both non-digital channels, and plugging in the adaptor does not change the output levels - you can do it mid-mix - just the lights become brighter. Read up on input and output impedance and noise/interference, and you will understand how output power affects sound quality. Or just plug the two into a non-studio desk and hear the difference (because non-studio desks have a lower input impedance), or run the signal through a long cable (because with lower levels the noise level is relatively higher, so amplification amplifies the noise by more).

But I often struggled to get a good punchy clean sound when connecting the S4 into soggy desks or amps, whereas I never struggle with the MC3000. My theory about it being impedance is because they were pretty much peers when feeding decent desks, but the S4 degraded when feeding poor desks or the junk you often connect to at parties; and because the levels coming from the Denon were astronomically higher. I wasn’t surprised that something running with 10 times the power supply would have a lower output impedance.

However I also appreciate what might be the colouring of the Denon. I work a lot with my KRK8s, which have a very club, punchy, crisp, solid but controlled sound - good, wide-spectrum kicks or live drums with some crunch in their distortion come through in every bit of their glory. The Denon really excels at this sound when pushed right - the separation and staging is phenomenal, and there’s always plenty of energy but it is immaculately precise and restrained. It reminds me of the Vestax scratch mixers - they were heavy beasts and you could push them, even mixing sloppily into the red, and the kicks would just sound fuller and even more gorgeous, and the rest would stay just as crisp, hence my love of engineering with the Denons - it is plug n play. The S4 was a clinical sound, certainly precise, but with poorer quality output stages there wasn’t the separation in the mids - they’d start to feel clouded and a little gutless. I’d also say the Denon specs don’t do the machine credit. Still now, a good few years after buying the Denon, if I don’t use it for a few weeks and come back the sound is exhilarating. Again, this might be colouring as well as tech sheet specs.

I’m with you on the sound quality review absense.

I think it’s a difficult thing to get over successfully in a review, after all, once a few basic descriptions have been used eg: Punchy, hollow, deep, hissy, grainy, dry, muddy trying to compare sound quality in words can be as useless as someone trying to describe Wine flavours via email or adverts for 4K TVs, knowing the advert is going to be seen on non-4K TVs. Tricky…

I guess sound quality is also going to differ depending g on what’s on the incoming and outgoing stages of the mixer… after all, I’m sure I’m preaching to the converted if I said that even a great mixer is going to sound rough if feed a 128kbps MP3, and then played through coat hangers wire into a cheap switchmode amplifier then out to $100 speakers connected using doorbell cable etc

Hard to qualify sound quality. A whole discussion to be had here. Won’t go there

Frankly I would always opt for the minimum amount of AD/DA conversions in any given sound path. Clearly you “should” pick the best quality DA converter to go from digital to analogue.

But … lets say the player has the best DA. You’d pick the analogue output to the mixer. Nice, unless the mixer turns everything into digital again (to let the digital FX do its work for example) and then postfader goes back to analogue. Now you go analogue to an expensive amp with digital DSP. Another AD conversion, then sound processing and, you guessed it, a final DA conversion to get the analogue sound out of the speakers.

In such a path, the best option would probably be to keep the signal digital all the way to the amp, even if the DA conversion in the player is the best one in the path. All the extra conversions would most likely do more harm than the gain you get from the better DA conversion early on…

Agreed. I hope no one was considering going analog from the decks to the mixer X) But good point.

EDIT: I have read posts too fast and made a stupid reply. Ignore this

I was always told and learnt it’s best to keep the signal as unproccesssed as possible. So minimal A to D or D to A, but try to use the best available converters.

As far the Prime series are cocerned there is no problem there.

If the signal is digital, keep it digital to the final output stage of the mixer or PA processor where possible.

Same goes for analogue, keep it simple and unprocessed.

Tweak only with minimal EQ, as this is over used to improve a poor quality input source. Ala MP3’s at low bit rates.

To jump in with a general tip on EQ. When using EQ for room correction (this does not concern the way us DJs use EQ as FX) or track compensation, cutting is always better than boosting. So if the mids are lacking somewhat, it’s better to take out a bit of high and low - remember to compensate the gain - than to boost the mids. This has to do with the way the EQs work and are configured and the fact that our ears are more sensitive to boosts than to cuts, i.e. cuts feel more “natural” whereas boosts sound more “processed”.

Just another two cents from Holland.

Totally agree with you there my friend.

I have quite a few digital crossover/DSPs that I use. I prefer to keep the connection digital from digital mixers to the house DSP when I can for sound quality reasons, but the use of the DSP allows for varying delays and more customization of infrasonic filtering. There are a few digital mixers like the PPD 01 that also wildly benefit from a better DAC than the glossy, forward-sounding onboard one.

You know that you’ve jumped in on a discussion that is almost two years old yes ? Still trying to give some traction to your point, which you’ve already spammed onto two other discussions?

I see you’ve met our local know-it-all and necro-bumper named Reticuli. You’ll get used to him (used: learn to ignore his posts).

I believe his personal record on a different forum is something like 7y btw so this is nothing.

Btw. If you really wanna see him talk useless stuff ask him to compare Hanpin’s and CDJ’s with regard to jogwheels pitch bending, wild stuff I tell’ya

I see you’ve met our local know-it-all and necro-bumper named Reticuli. You’ll get used to him (used: learn to ignore his posts).

I believe his personal record on a different forum is something like 7y btw so this is nothing.

Btw. If you really wanna see him talk useless stuff ask him to compare Hanpin’s and CDJ’s with regard to jogwheels pitch bending, wild stuff I tell’ya

Wild is certainly one way of describing it / him

Time means nothing to the interwebs. These conversations will outlast us all.