Screen image ghosting after 30 to 60 minutes

Whenever I play on the prime 4 around 30 to 60 minutes, the screen starts ghosting. Don’t know if this a hardware or firmware problem? In the picture below you can see what the problem I’m having is. The problem goes away if I turn off the unit for a few hours, but comes back as soon as I start playing for 30 to 60 minutes. I saw another post about this problem for the sc6000 players. 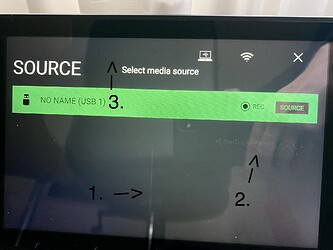 Its not clearly visible, but its really annoying when you notice it. I don’t know if this can lead to any permanent damage of the screen.

This is not normal in my opinion. During this pandemic, I’ve been using my P4 for background music and leaving it on 4-5 hours a day without any ghosting or screen burn-in. You might want to contact Denon DJ customer support through their main website about this.

Thanks for the response @Mixlive

I’ve contacted the DenonDJ customer support. Lets see what they have to say about this.

mine is like that too and it is pretty new.

I have the same problem. @JustJoeri when you get a response from support, what solution they recommended.

@pehu, I’ll let you know as soon as I get a response.

@JustJoeri - did you get a response?

I had the same issue with my P4 (after about 2 months of use) where the screen would ghost almost immediately and there was faint lines. The problem has largely gone away but every once in awhile the screen will randomly flicker.

It was also reported in this thread: Screen Burn/Ghosting

@plurbaron thanks for the response and yes, I got a response back from the customer support. This is what they said about it.

“This is screen retention, not screen burn.

Oled technology suffers with this phenomenon, even most high range OLED Tv’s from LG and Sony ect have similar issues.

If the unit was burning in the image and will not go that is something I would consider a fault however from what your describing I do not believe this is a fault of the product but rather a limitation of the screen technology however if it is really apparent and worse than what would be considered a small amount of retention then it might be best to get the unit back to your retailer for a service inspection.

Ensure that the screen is on lower brightness continuously.”

Having the screen on a lower brightness continuously isn’t the reason why I bought the prime 4, so I’ve contacted my retailer and sent the unit back for further inspection.

That is definitely a problem with the display panel itself. Being that this is a OLED display, it could be a problem with the technology, though this is the first I’ve ever seen this happen. If this was an LCD panel, I’d say its the column/row driver having a problem, perhaps from over heating. But with an OLED, I can’t be sure.

I’m surprised customer support calls it an OLED, because to my knowledge (and eyes) it’s not.

The only OLED screens used by DenonDJ are the in the X18x0 and the small FX screens of the Prime4.

OLED black is black. The touchscreens on the Prime series are edge/backlit LCD.

@Reese Yeah, that is what I thought aswell.

Hey @Reese I posted about this problem but now the playhead has caused a permanent burn, although faint but it’s there after 8+ hours of having it off. Also, image retention still happens.

Image retention is something I see more on the 10-inches than on the 7-inches. Apart from the size difference, it could be differences between batches.

I can see the ghosting of the bright white static screen items sometimes on the SC6000’s, but I’m not experiencing burn-in you describe to that extend, nor on the Prime4 I had here.

@Reese right my concern is that it is very noticeable and the perm burn from the playhead. I guess I have to wait for customer service to get back to me.

@JustJoeri Did it go automatically? Is it solved? It happened to me yrsterday and now im concerned