Is there going to be a future update that allows 4 vertical or horizontal waveforms on the center Prime 4 display for Serato? @JWiLL TIA

Doubt it because Serato determines what features OSA gear will have, not Denon. You can thank them for crappy Serato integration.

If Serato was smart about, they would do it the right way, then charge an in-app purchase for the development of this. That would be worth the additional cost if it was done properly, not the poor effort they gave.

The Denon DJ SDK doesn’t yet allow waveforms but who knows if it will work in future?

It’s not Serato’s fault. It’s all down to what they can work with. The firmware/SDK has to be able to show the external waveforms and that goes for Virtual DJ too.

This was confirmed by Serato on their own forums.

The difference between ‘Native Controller’ and ‘OSA’ usually depends on an accessory or controller with “Serato” stamped on the case or not.

The Denon DJ range are OSA’s meaning no waveforms.

It’s not Serato’s fault. It’s all down to what they can work with

2000nxs2 has moving waveforms when used in HID with Traktor. With Serato it doesn’t. That alone show you that is a lie.

Denon DJ has an SDK to work with which Serato have followed. I guess you have certain things you can/can’t do in that.

This is probably why there is no Traktor support in the SC5000. Combine that with 100 + 50 job losses at Native Instruments it doesnt paint a picture of a rosy business for anything big to come in the near future. Native Instruments have worked with Denon by putting Traktor inside Engine. Denon DJ are all about losing the laptop on these products but know they can’t just abandon software so give them enough but the full experience is inside the units.

What was added to the CDJ back in 2018 (it took that long) was a phase meter and the ability to show different coloured waveforms. This to me says that a CDJ uses a similar way of putting info on the screen as their own Traktor S8 (I have one). The S8 can be customised easily by following a guide on DJTT so they worked it out for sure. I can customise my S8 screens.

Virtual DJ are the masters at hacking into various controller screens and displaying their own waveforms but where is their support from this? They need the Denon DJ SDK and I guess they wont pay for it.

In conclusion, software companies have to take what Denon DJ is offering in their SDK. I don’t know exactly how other companies do it but it’s usually a “hack” by manipulating their own software to trick the Serato DJ controller to think it’s receiving data from Serato DJ. I guess Traktor DJ was adapted to mimic Rekordbox DJ. If Serato did this in the same way it would break compatibility with all the other products that use screens in Serato DJ, unlike Traktor that only supports Pioneer DJ out of their own ecosystem. Nothing else to break.

Thank you for your detailed and in-depth response. You gave great insight into this topic.

@JWiLL Can I please give your thoughts as well.

Wilks, you put a lot of words but fail to explain a simple question: If Pioneer CDJ can display a moving waveform when used with Traktor HID why cannot it do that when used with Serato?

You claim it’s something with the SDK by the manufacturer (in this case Denon) but Pioneer example shows your claim is bull excrement, sorry. It’s Serato, pure and simple.

Oh things have gotten to the use of “bull excrement”. Nice

So with no more waste output of the male bovine variety, denon should Park all ideas of dj software integration and just work work work theirselves at nothing other than bpm and Beatgrid improvement tasks in firmware on sc5000 and engine Prime software

Anyways the current integration is serviceable

I said above that not all waveform technology is the same. Denon DJ use a Software Development Kit and Pioneer DJ use… ??? Nothing? Open protocol? SDK behind a paywall? Unless we’re developers we’ll probably never know. This is business and nothing is free, especially when DJs are concerned.

I don’t work for Pioneer DJ or Serato so can’t answer why. I believe only they should be able to comment officially. Maybe hit Pioneer DJ up or Serato on their forums?

On my post above I didn’t “claim” to know about the SDK but actually linked you to Serato’s comment from the HID developer on their own forums regarding developing for Denon DJ. It came from Micheal R from Serato and he said this https://serato.com/forum/discussion/1617126#10828456

I’ll pop it here for convenience:

Currently the SC5000 SDK does not allow scrolling waveforms with Serato. This may be updated in the future but I can’t guarantee anything.

I don’t know about Traktor and what deals they have with Pioneer DJ (if any) but I do know that Serato use a type of screen capture to replicate the waveforms on their official products. It’s basically copying a portion of the waveform on screen and streaming it to the screens of the controller (Rane Seventy Two, NV/NVII/NS7III & Dashboard). This isn’t straight-up the same method as (N.I.) Traktor use as they use javascript QML files for the display. Two different technologies (I’ve edited my own on my Kontrol S8 - Take a look at what you can do here with Traktor but NOT with Serato DJ) https://djtechtools.com/2016/09/23/hack-kontrol-s8s5-screens-advanced-layouts/

When Virtual DJ ‘hack’ screens on Serato controllers they still have the Serato interface on the screens. The firmware inside the controller thinks it’s Serato DJ sending info when it’s actually VDJ. Basically a kind of ‘hack’ but no official support. As masters of hacking screens, where is VDJ on this? SC5000/NXS screens?

This isn’t to say Serato DJ waveforms on NXS it will never happen.

As said above, changing the way Serato DJ outputs to screens just to work for the few people on NXS devices that don’t use USB could possibly break the way it works with all their other screen enabled controllers. I know I wouldn’t risk it so it would have to be another screen mode developed alongside the current (because there is no ONE standard for devices). This uses precious development time for a few scrolling waveforms that is still scrolling on a screen two feet away from the DJ on a laptop. That and most users use CDJs in stand alone mode with USB sticks.

Personally… not worth it.

Even if Serato wanted to put waveforms on the screens, the Denon DJ SDK doesn’t allow it yet.

With Pioneer DJ, pay the all of the monies and get access to the full Enhanced HID screen. Native Instruments obviously thought it was worth it in their desperate state. Do Serato need to do it? Not at all. Serato has risen to the top of the Pro DJ software league and by not including scrolling waveforms on high-end Pioneer DJ player support has hurt them how?

Collaborate with Serato on a logo controller or player and pretty much expect waveforms on your screens. Develop alone with no input from them and later opening up with an SDK to add support afterwards for Serato DJ then expect OSA status and no waveforms.

As masters of hacking screens, where is VDJ on this? SC5000/NXS screens?

No SDK only ports. If virtual DJ was to gain access to the ports they could do almost anything they want with it. SDK is only a filter for the ports.

It is but the firmware inside the controller makes a difference too.

It’s the actual firmware inside the Numsrk NV gives it the Serato Remote style look as the units have the screen design programmed in to the NV. The units then wait for track data to arrive down the USB and the populate the small area already defined. This reduces the data needed down the USB cable by sending just the basics. VDJ just replicate the data Serato sends.

Quite a good way to take load off the USB. Possibly a similar way the CDJ does it.

By registering as a CDJ over link you can trick your laptop into think it’s a CDJ. Good for controlling Ableton Link or lighting at a show (it’s how ShowKorntrol did it years ago but wasn’t public).

What if Pioneer DJ's proprietary Pro Link data stream wasn't hidden, but instead accessible to any device connected to it? In today's article, guest contributor Jon Feldman takes a closer look at a new project that allows DJs to use the data passed...

Collaborate with Serato on a logo controller or player and pretty much expect waveforms on your screens. Develop alone with no input from them and later opening up with an SDK to add support afterwards for Serato DJ then expect OSA status and no waveforms

On this we can definitely agree on

This reduces the data needed down the USB cable by sending just the basics.

Aside from the moving waveforms more could be done on the usage of the touch screen and hope they do.

I know about having pages built in to the unit so to speak. I made a feature request once upon a time to have basic midi layouts on screen in controller mode like x-y pad for fx and such. I don’t see things like this requiring a lot resources to make happen. 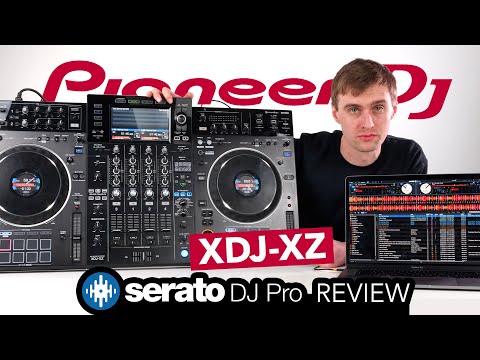 I guess having that Serato badge does carry some weight.