Everytime i use FX Echo, Hall Echo or Reverb, and then press the “Parameter” button (As it now appears dimly lit) i have to remember that it immediately kills off all of the audio. Take this post as a warning to all (especially new Prime 4 owners) until this issue gets fixed… Just imagine being on a gig and you press the “Parameter” FX button and the music suddenly comes to a stop… I am not sure why Denon chose the “Parameter” button to act like this or if they even know thats it acting like this… But this really needs to be fixed soon within the next firmware… 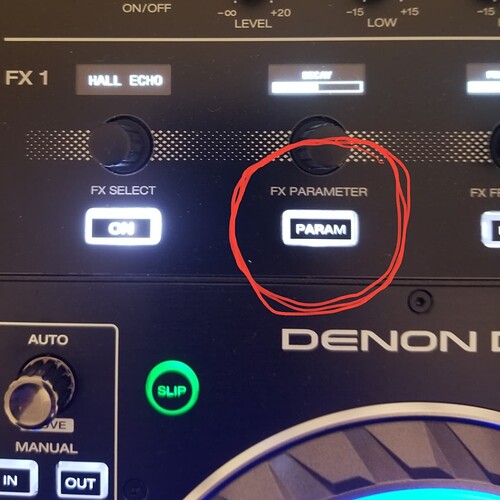 Why did you upload 3 similar photos?

But yeah, the EFX control (and quality) on the P4/2/Go is subpar compared to devices like the RX/XZ/DJM line. A bit cumbersome and not very intuitive to control or change parameters quickly. I guess most people only work with the SweepEFX for that reason.

I totally agree … However, as a Denon fan, i do not like seeing that some things are sub par (llike the FX)… This could have been easily tweaked in firmware and a failsafe added. But since everything now has turned into “popularity votes” i do not see this issue ever being fixed… As “some” folks simply won’t care enough about this one… So this post will have to serve as a warning to all… Never, ever, press the “Parameter” button during a live gig! Again, it’s the most dangerous button on the Prime 4!

*The three photos are to show and remind folks that specifically, the “Parameter” button will immediately kill the sound when pressed during FX Echo, FX Hall Echo, and. FX Reverb.

I just tried it and can confirm that it kills the music. Also disappointed in the overall quality of the FX compared to the competition.

Hi, I don’t think this is intentional and it seems to be more of a bug, did it happen in previous firmware versions? I think it should be reported as a bug and they will surely fix it in an update

Agreed… Not intentional… However, i complained about this issue less than a year ago… I think back then it was kinda sorta working so it ended up on deaf ears… I forget?? Now, its completely not working, it just kills off the music as soon as you press the “Parameter” button… This is very dangerous (especially for first time users playing a gig)… No other mixer behaves this way… Not Stanton, Not Pioneer, Not Numark… With those mixers you select a FX and it simply works!

Also, One thing i have come to realize while on this forum is that if your not in the top “group” of constant posters it seems like you get kinda pushed back with comments (even if your right or have a great suggestion)… Again, Everything is a vote now… If this issue ever gets fixed i’ll be thankful.

This was similar to an issue with the Traktor S4 Mk3 whereby pressing the Ext button, which just happened to be beside the gain knobs would kill the music, however it was eventually patched out in later versions of Traktor Pro.

If it is a bug as @El_Corsario mentioned, fill out a bug report for it.

Moderator, please move this post to the appropriate bug report section so we can keep further tabs on a working fix for this issue. Thank you.

This is by design. With certain FX (Echo, Hall Echo and Reverb) the PARAMETER button triggers an effect hold or freeze. This allows you to accomplish transition effects like Echo out, and Reverb out in a single action without having to stop the deck or move a fader.

The PARAMETER button flashes to indicate the Hold/Freeze is active.

The PARAMETER button is unlit for FX that do not offer this feature.

The User Guide is currently missing these details, so I can see how it would be confusing or unexpected. Apologies for that! I will mention this to the team for the next update.

Regarding effects in general, we are currently looking into ways to improve these. No feature request needed

I confirm correct operation according to explanation, great discovery, I will use the effect modules again. Too bad Fx Auto Gate does not sync.

I fully understand its intention… The Parameter function is not working 100%… It will often kill the music as soon as you activate it… Then other times it will fade the music out as normal… This issue needs further investigation. You guys should not have jumped on it and deemed it fully working. Now this post will be closed without further investigation… This is exactly what i have been trying to avoid. Thank you.

The parameter works well, what makes it sometimes late and other times it cuts according to the Decay that it has adjusted, at the maximum it leaves more tail than in the middle.

The Parameter function is not working 100%

Hi @jnyvio - I confirmed that the feature is working as designed in my environment before I wrote the solution above. As @djtelloleal mentioned, the results will vary based on the levels of Decay or Wet/Dry. If the audio is cutting out without an effect tail, you may want to experiment with those parameters.

There is an issue here in the way this feature is currently working (It does not always fade out the music the way it should)… It is not reliable and will jam someone up if not further looked into and addressed. Thank you.

This function that I did not know the truth that seems perfect to me, if I find as a negative that you have to have a very long Decay for the effect to be sufficient, if it is in the middle it cuts too much, perhaps a solution is that at the moment of activating it will automatically jump to a longer and more appropriate Decay for the idea as intended. Touching the button accidentally seems difficult and no more dangerous than other buttons like Cue Play Hot Cue Load etc…

Yes, its abruptly dropping the music under certain conditions… I consider this behavior to not be implemented as good as it could be… I am trying to help here… I could have easily just hit the “ON” button again if i wanted an abrupt stop…

Totally understand your concern, as it is valid. I will keep this in mind for the future. Hopefully now that you understand the functionality, you can apply the effect in a useful way. As mentioned earlier, we will also include this information in the future User Guide. I appreciate your feedback!