Pioneer DJ (or “AlphaTheta” as they tried to hide behind recently) has just been sold to “Noritsu” a company who make photo printers.

Remember how last year, Pioneer DJ looked like it was getting ready for a sale? They even rebranded the company that owns Pioneer DJ and Pioneer Pro Audio into “AlphaTheta”. Now, the massive investment firm KKR (who bought most of Pioneer DJ from...

Unless Pioneer / AlphaTheta has some model that was in the pipeline for the last couple of years and was about to come out to the public already, I wouldn’t hold out much hope for anything particularly groundbreaking anytime soon, just old models recolored.

With pioneer being less and less “in the picture” this is a time when Denon need to really pull it out the bag, not just more months of resting on their mediumly good glow of Prime. Come on Denon. Sort out Engine, on-player editing of Cue / loop names, bpm and grid analysis on engine and on player. Time to tear the blindfolds off of the tens of thousands of pioneer Sheep buyers and let them all see there’s a better alternative to the old standard. Concentrate on standalone excellence !

I agree, more of the same with a new name and a price increase.

Great opportunity for Denon here. Just get Prime to an acceptable level and look at quality control and realworld testing of the units themselves.

And let us, as Denon fans, start creating a welcoming environment for all those Pioneer DJs who do decided to make the switch, by refraining from using polarizing comments like “Pioneer Sheep buyers”.

Other than that, it remains an interesting market.

My 3 cents as usual.

It was rebranded way prior to the sale, and mostly for their club installation business, which is now considered at least as high-end as Funktion One and Void. Pioneer DJ, after all, also owns famous club drivers maker TAD. As I see it, since Pioneer is not publically-traded, this is not that much different than someone selling stock to someone else. I am surprised they have this much debt, but they’ve done some stupid stuff and failed to improve their firmware in simple ways I’ve suggested, so I suppose it shouldn’t be that shocking they’re having problems.

According to Phil’s latest census Pioneer are well ahead. how can they possibly not be making money, especially with their “Apple” pricing? 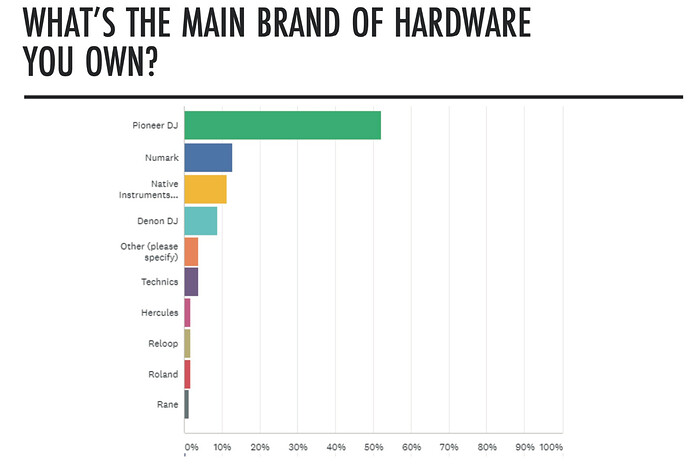 how can they possibly not be making money,

You’re right about the Apple pricing , like they just price it double for no component reason.

The question and graph Phil poses doesn’t differentiate between “owned” and “bought recently”. Someone could have bought a cdj1000mk3 or a nexus, like 5 years ago and still keep claiming that as their main brand that they own.

The other half of the real question isn’t only how much money did pioneer make, but also, how much did they spend. I would guess that a lot of their celebrity DJs are paid by pioneer and given free systems, which are all expensive overheads. Also there isn’t the demand for their club PA systems speakers like their players and mixers. Hundreds of club or tour operators might buy hundreds of pairs of players , but speaker system sales can only be a fraction of that figure.

None of the clubs around here buy any new gear. They do have CDJs but they’re ancient.

Ancient and devastated. I had many times option to play on the club setups and that was terrible. Broken Cue/Play buttons, wobbly pitch faders, up faders lose, crossfader snapped off, Knobs scratched off the rubber material or broken. People don’t care about club setups and they treat them very bad. I take always my Denon setup with me, with at least 2 decks and a mixer and many djs want to play it more than the club setups that are used to.

I just take in the MCX8000, plug the XLRs in the back and nobody knows any different.

The question and graph Phil poses doesn’t differentiate between “owned” and “bought recently”.

However, Pioneer also keeps blowing money on new models of stuff people clearly aren’t buying. If they’ve had the NXS2 system for years out there and there are many of those and the older models already owned by people and clubs, then Pioneer DJ is not incurring costs to make even newer versions of these that they aren’t selling and people aren’t buying. People clearly are not buying massive quantities of these other endless controllers Pioneer keeps putting out there, yet Pioneer keeps blowing money on these new designs, new marketing, and more production costs. It’s curious, because the changes they could make to their entire line with a couple of tiny, easy-to-implement things would radically alter their capabilities, but they have no interest due to a kind of “we’re already king” arrogance. Maybe these new owners will do something about it.

Maybe these new owners will do something about it.

Hah hah… Pioneer-branded wedding DJ photo booth kiosks. Please. They’ve already headed so far into the turnkey laptop-style sync system for newbs and posers, that’d really sum up their recent business model. That, and they can add a RB & KUVO-style master upload and subscription service to the photo booth that allows people to only share and get copies of everything if they keep paying. And Pioneer keeps the originals. Beautiful! I stopped updating RB and reverted after they started downloading your entire library metadata. I was like, that’s it, I’m done. I can live without the new features.