So once it’s selected, what’s next to “dial in” 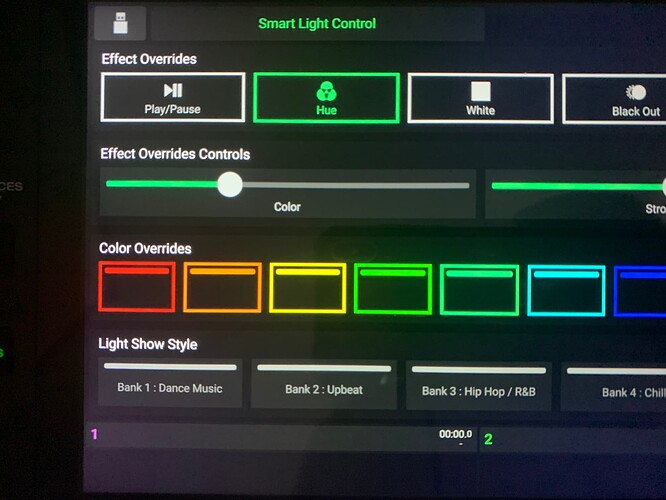 Hey man thanks for figuring this out for me! I’m currently running a pioneer DJM900 (don’t shoot me) alongside my SC6000’s and I have the same issue where all I can operate (with Philips Hue Lights) is the strobe. I agree with you that a basic feature repetition or analog colour select should be able to be implemented regardless of fader positions. Considering the strobe is already working I’d say that’d be fairly possible!

The reason the faders are required is that Engine Lighting builds up individual lighting tracks for all decks that are active.

Some of these light shows might be AutoScripted, meaning they are specific to the track.

Engine Lighting then uses the fader values to a device which of the 4 different light shows to play back.

While its true that the basic light shows might not need this functionality, with the work we have planned in the future, this becomes absolutely necessary

Thanks for your response. I do in fact get that having the mixer is a prerequisite , especially with the more complicated effects in mind. I just wish I could get my hands on that damn X1850 mixer already

. Hoping for it to come back in stock in December

In the meantime I did figure out a temporary solution to getting my Hue Lights to react to the set that I’m doing. So for anyone who is looking to do this without an X1850 mixer just do this:

Obviously it’s not as cool nor sophisticated as the propper Dennon way of doing it in conjuction with the 1800/1850x mixer, but for the time being it works pretty darn well!

Yup, that is basically what I said. If you install the Hue app on your phone you can simplify the setup a bit, just keep your phone in thebopen to pick up the sound from speakers.

That is no better than setting your Hue lights to listen to the music coming from your speakers. And that is what I would do if I were you.

Just wanted to add that I am having issues as well but appear to be slightly different.

I am using a Prime 4 which will connect to my Hue bridge and control the entertainment area that I have set up, but only while the Prime 4 is sat 5 feet away from the Hue bridge. When I move the Prime 4 across to the far end of the room (roughly 15 feet), the bridge is greyed out in the ‘Available Bridges’ page. When I click on it it tries to connect but just says bridge not found.

There is no walls between the Prime 4 and the switch and I have storng Wi-Fi with Beatport streaming on the controller in this position of the room.

Hello, looked up this thread as I bought a pack of two Hue light bars and a base unit, and have them connected to my Prime 4 but when I click the option to “connect a new bridge unit”, even though I have everything powered up and connected it does not recognize the base unit I have. I’m really hoping I didn’t get the wrong model. I’m in the Philippines and ordered from the US…

Is your Hue bridge square or round? It needs to be square, this is the newer V2 bridge.

Also, Check that you have fully set the up in the Philips Hue app first by putting them into an Entertainment Zone.

Check for a firmware update in the app for the Bridge and light bars. There has been a few for the Hub in the last year or so.

That did the trick! Thanks