Denon DJ should really make a new 4 channel Serato controller with the new large size jogwheels like on the LC6000 and a sampler button, compatible with Engine of course. The mixer would ressemble that of the X1800. I feel like Denon DJ is not competing at all against Pioneer DJ and Rane when it comes to DJ controllers (ex. DDJ 1000SRT, Rane One, etc.). They should create a new 4 channel controller like this model below, it would do great numbers! PLEASE DENON, MAKE EVERYBODY HAPPY! WE STILL USE SERATO!

and a sampler button,

Well, if you’re using serato then it’s always going to be serato/your laptop that’s really handling the sampling, rather than the box of buttons (midi controller).

Also with midi, you can map almost any button in the controllers surface to be a sampler button… yes the button will be printed with a label that says “view” or “search” or “menu” but you can make the software act as though you’ve pressed a button called “sampler”

On another aspect in’music who own the name of denon also own Akai who make a full range of samplers for all budgets so adding a sampler to a denon product would be InMusic selling against themselves which wouldn’t make much sense.

Akai + Ableton Link = dope. Btw I have the Force and I love it.

As for the controller request, Numark has you mostly covered (NS4FX, Platinum FX, etc.) but more in the entry rage. The SC Live 4 is more mature, has 4 channels and fully unlocks SDJ Pro. It’s a bit cheaper than the DDJ-1000SRT, while both are made of plastic and share a similar weight. The Pioneer has the bigger jogs with the more refined jog displays, the effect and mixer section are also a bit better. But the SRT will always require a laptop, while Live 4 works standalone with Engine OS, this alone is huge. So you get the best of both worlds for a reasonable price. And if you really want to use it as Serato controller mostly, the Live 4 is still worth it. For example, the SRT lacks any Needle Search strip, while on the Live you can simply skip through the waveform on the touchscreen. The Auto loop control via encoder is also much better.

A Prime 4 Mk2/Plus with bigger 7" jogs, a better mixer/EFX section, integrated Sampler, and refreshed design is what many people request. There are some rumors that this is gonna happen in near future, but nobody can tell at this time.

A pure Serato DJ Pro controller (without standalone/Engine) will probably never come from Denon again, more like from Rane (high-end) or Numark (low/mid-range) I guess!

A Prime 4 Mk2/Plus with bigger 7" jogs, a better mixer/EFX section, integrated Sampler, and refreshed design is what many people request.

Ok but how exactly would that giant thing be any different from a set of SC6000+X1850 put together in one plastic case? Because Denon would charge you 200$€ less for it?

All in one gear will always have the fate of being smaller, less featured and cheaper that the full club set of 2xplayers+mixer

A pure Serato DJ Pro controller (without standalone/Engine) will probably never come from Denon again, more like from Rane (high-end) or Numark (low/mid-range) I guess!

I think you’re right. With so many people engaging with the phrase “ditch the laptop” and wanting to go standalone, making a piece of gear which can only be used one way (serato) but not standalone, would be really limiting on sales.

At the moment denon only have one piece of equipment left which works -Only- with DJ software, and does nothing unless a laptop with dj software is connected, and that’s the MC7000

By rearranging some controls, and especially considering how much space the mixer section and two EFX banks take (and waste) compared to the similar-specked and much more compact SC Live 4 Mixer, you can easily increase the jogs by another 0.5-1 inch and keep the overall unit size very similar. Also, Pioneer AiOs (DDJ-1000, XZ) can have even bigger 8" jogs and remain much cheaper (and in the case of DDJ-1000 also much more compact) than separate units, so your argumentation fails here. 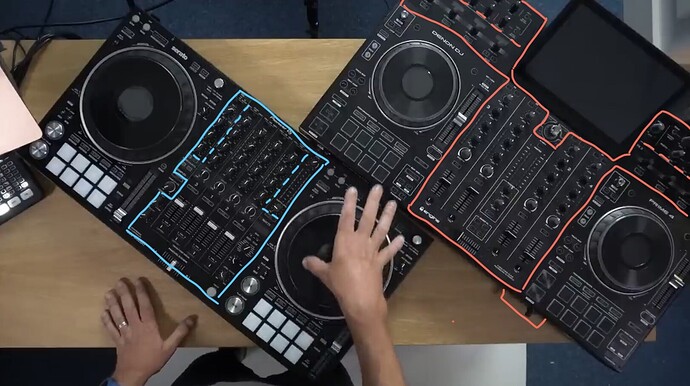 Tech designers need to improve space efficiency. It’s perfectly possible. Make the channel strips a bit smaller with the EFX section included, eliminate the rather niche grid edit section to move the pitch slider down, utilize the wasted space above the jogs, and voilà.

I agree with the “smaller, less features and cheaper” aspect, and there still would be enough differentiation points compared to a full SC6000/X1850 set, like even bigger and better jogs, deeper EFX control, more spacious controls, 2 separate screens, higher quality buttons/faders and the overall better modularity + failsafe aspect (if one deck fails, you can still operate your other one + the mixer, and swap it out later).

Everyone who prefers or needs to get 2-4 separate decks + mixer, which includes all major venues, will stick with those, no matter how badass the update for the Prime 4 successor gonna be like.

So yeah, here again my Prime 4 “next gen” wishes/ideas

This concerns the hardware only, of course.

Also, Pioneer AiOs (DDJ-1000, XZ) can have even bigger 8" jogs and remain much cheaper (and in the case of DDJ-1000 also much more compact) than separate units, so your argumentation fails here.

Those are controllers, not all in one standalone devices.

You are comparing apples and oranges because controllers have from the beginning been smaller with more features, that was never my argumentation.

You were the one stating “Ok but how exactly would that giant thing (…)” implying that a Prime 4 with bigger 7" jogs would turn into a “giant thing”, hence I demonstrated that it can remain exactly the same size as the current Prime 4 by making better use of the surface are, like other gear (with even bigger jogs) manages to do as well. This has nothing to do with “Apples vs Oranges”. I have clearly marked the affected areas, none of those include any AiO-specific controls, just the mixers and effects.

One of the reasons I really like the SC Live 4 is the mixer layout. Most reviewers praise it for the “club standard” layout, but I add to that the much more compact arrangement of controls, like on the DDJ-1000. In other words, the gaps between the EQs, faders, etc. on the P4 are unnecessarily big. I guess because they wanted to align it perfectly with the screen. However, this plus the two EFX banks, really limited the remaining area for the decks, and with that, the (rather) small jogs.

(If you didn’t imply that with your post above, have my sorry and just ignore my explenation)

You still keep comparing an all-in-one-unit to a midi-controller-only (which I would agree is a bit of an “apples vs oranges” thing). What’s on the inside is very, very different, and probably does effect what’s possible on the outside as well - if not technically, then at least from a price point.

That is true, yet again, I was mainly speaking about the surface area of the mixer and EFX section, which has nothing to do with AiO vs Controller. See SC Live 4, a much more compact mixer section, because the controls are arranged / spaced out more efficiently. At a similar footprint size of the Prime 4 and with the speakers removed, bigger 7" jogs would be perfectly possible. The extra hardware components for an AiO, mainly CPU, RAM, storage and PSU all sit in the back section anyway, discernible by the vent slits. Also, price wasn’t an issue here. I stated:

Also, Pioneer AiOs (DDJ-1000, XZ) can have even bigger 8" jogs and remain much cheaper (and in the case of DDJ-1000 also much more compact) than separate units

Which was a response to this statement:

Ok but how exactly would that giant thing be any different from a set of SC6000+X1850 put together in one plastic case? Because Denon would charge you 200$€ less for it?

Which didn’t make much sense. First, because even with slightly bigger 7" jogs a Prime 4 Mk2 would be still far more compact than a set of two beefy SC6000 + X1850, and second, certainly more than just 200$€ cheaper. This is all my posts were about.

The OT suggest LC6000 full-sized jogs, then of course, the unit would become stupidly big indeed. Hence, 6.5"-7" jogs combined with a smaller mixer section would be a good compromise imho.

EDIT: Here is a great 1:1 comparison. The P4 Mk2 should feature a similar mixer layout, while maintaining the advanced Mic EQ and Master/Booth/Zone sections: