Just received this in the newsletter. The only question I have for Denon DJ is this US only or global?

EDIT: One of the Dutch retailers confirmed they are participating in this deal. 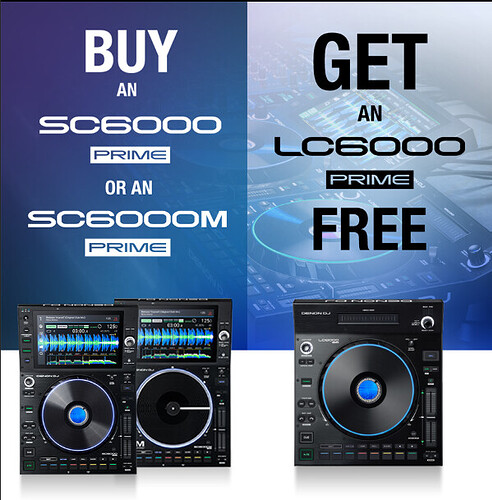 Just received the email too. UK as well it seems.

Looks like this is for the rest of the world, not U.S.

Same deal in Ireland however i hate the fact that they increased the price of the SC6000 by €200 prior to the promotion.

Samsung do exactly the same thing. For example a 55 inch TV that has been £1800 for months suddenly becomes £2100 with a free handset or tablet. I’d question the term “free” as technically its not true at all.

Hello VesNL, I bought it from Musicstore in Cologne (Germany) and they still had a few sets there. Shipping to the Netherlands is also no problem Not so intersting, price of the SC600 series increase of 200€ with this deal.

I picked up mine in Melbourne Australia last week. such an awesome deal

Buy better at a company which offers good cust service like Thomann or recordcase. Look at reviews on idealo and google to know what that means.

Music Store s*cks so much with customer service?