I have been using the Beatport Pro App to tag my music files for a while now but have since seen it has been discontinued. Im after a way to tag my files in a similar way to how this app worked.

What I liked about this app was I could play a track and bring up the mood section, it gave me predefined options for moods such as, groovy, funky, proggy etc… I could even add my own moods. These would show up as boxes that I would click on, this would then write the moods to the comment fields then I would import into iTunes where I manage my music.

For example a comments field would look like this,

I preferred the ease of having predefined moods, and maybe the option to add my own, rather than writing in each tag separately ( I know, im lazy!) I dont have a lot of spare time to listen and sort new music and this was a really quick and easy option for me.

Below is a screenshot of how the tagging works. Any ideas would be great! 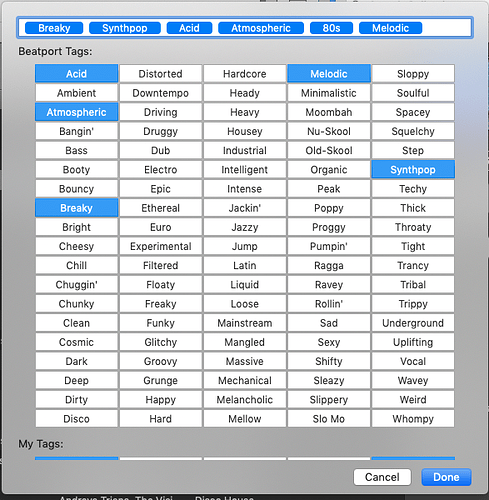 So the feature request would be the ‘MyTags’ feature which is found in Rekordbox, implemented in Engine Prime.

You will need to put this in the feature request section of the forum where the developers look at it , if it gets enough votes for their time.

There’s a laid out form and some questions to answer

Thanks for the replies, it wasnt so much a feature request for Engine Prime but an alternative to Beatport Pro. I wasnt aware this feature existed in Rekordbox so thanks for you help.

There is already a feature request for this functionality here

I preferred the ease of having predefined moods, and maybe the option to add my own, rather than writing in each tag separately ( I know, im lazy!)

I don’t think taking advantage of this feature is about being lazy, it just helps to maintain uniformity in the comments tags.

When typing it in manually, there is a high likelihood of errors in typing, inconsistent tags eg Hip-Hop vs Hip Hop