The left-hand platter screen on my Prime 4 has stopped working, I only had the unit for 6 weeks before this problem occurred. The unit encouraged me to update to the latest firmware (see the pictures attached), though this did not work. Does anyone know a fix? I contacted support about the issue on the 13th of May and received a response from someone at Denon/inMusic telling me that someone from Denon will be in touch soon to help, but I’m still waiting for assistance. I know that the whole Covid19 situation has slowed things down, but it’s been almost two weeks since the initial reply to my support email and the unit developed the fault over three weeks ago. The only email I have recieved since is a customer satisfaction survey which makes me think that maybe somehow my case has been accidentally marked as resolved?

I have attached some pictures for your reference, the platter with the Orange LED ring is the one that has developed the fault with the screen. The right-hand side platter (Purple) is working as expected.

Any one else had this issue or know of a fix? 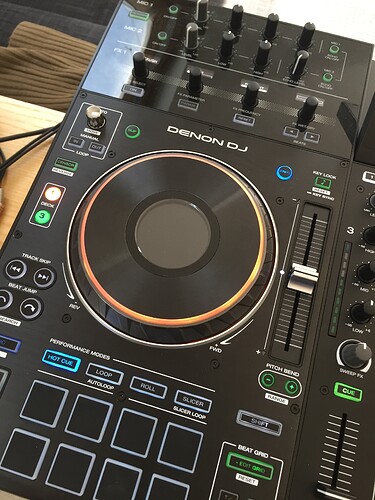 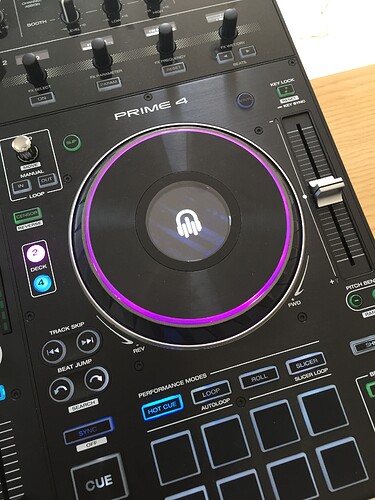 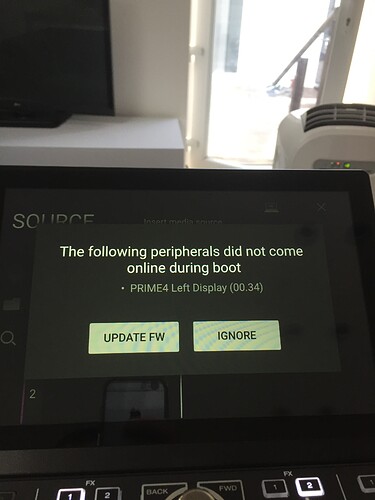 Did you upgrade before or after receiving this error message?

When did you get the message, which firmware version were you using?

Hey @DjAj , thanks for your reply!

I updated the firmware after the issue started. I was prompted to update the firmware the first time it highlighted that there was an issue with the peripheral not coming online.

It worked perfectly for the first 6 weeks that I owned it, I left it on the version that it shipped with from the shop, then one day the left hand platter screen stopped working and the Prime 4 wanted me to update the firmware to 1.4.1.

There are no internal hard drives connected, and the issue persists even if I disconnect all accessories from the unit (USB sticks).

So I’m not sure what to do, I haven’t used it since the issue started.

So I summarize you, if I understand correctly:

Yeah your summary is correct!

I can’t remember if it was 1.3.1 though? It was definitely 1.3.something! Either way, it was the firmware that was loaded onto at time of shipping.

But yeah, your summary is exactly how it went. I have left the unit alone since finding out the update did not remedy the issue. I have powered it on a few times since to see if it was an intermittent issue, but unfortunately the display has remained off ever since it became faulty. I have been waiting for support to get back to me before deciding to try other troubleshooting measures.

I asked you all this, since others have had a defect identical to yours AFTER having updated the firmware. Instead in your situation the left display has turned off BEFORE updating, and this means that the cause of this is not attributable to the firmware but to a hardware failure.

Typically the other guys have always sent the console to Denon DJ for repair. Maybe you could also contact your dealer to speed up the procedures, he should operate within the two-year warranty (if you are in Europe).

Don’t worry, stay in touch with Denon support, it takes a little patience but they will solve the problem by changing the unit.

Assistance is present and very serious about it. It is now known that it is a hardware problem, and the unit needs repair. If you search the forum, you will see that others have had this problem, including myself.

It is not a problem that can be solved only with the installation of new firmware.

Thanks for this DjAj, I did actually contact my dealer yesterday too, just to find out what the best course of action is. I read somewhere on the forum that one of the other guys had his purchase warranty voided because he went through Denon for a replacement. So I just need to establish what the best course of action is at the moment! I don’t want to potentially risk losing my two year warranty, the shop I bought it from are an official Denon supplier so I’m sure they’ll know what the best route to take will be.

@REIS, yeah, it’s a bit of a bummer, especially with the slower response times caused by the coronavirus at the moment, I’m mindful that it’ll take longer for things to get sorted due to the pandemic, though the email I was sent with the customer satisfaction survey made me think that my case has been overlooked and maybe marked as solved, as it’s unusual to be sent one during the process of dealing with a case.

I have seen that the admin and Denon guys seem to be pretty good at sorting issues out on the forum, hopefully, they’ll see this and offer some advice.

How has your unit been since the repair? All working ok?

I appreciate you both taking the time to help out with your replies!

Look … I can tell you that when they took charge of my case and that of a friend, with the same problem as you, within 2 weeks and in full virus crown, they sent me a new unit before I sent back my defective one , and the following week they came to pick up my “old unit”.

And without any expense I pay !! Super efficient. I only found that just opened, I noticed that it had been used in some way, and immediately after asking for info, they told me that before sending me the new one, this was tested by the Denon team, so as to provide me with a working unit and without hardware problems.

And this thing made me just what a pleasure. Think if they sent me another with the exact same problem … they certainly didn’t look good.

Anyway the new one is fine and no problem. Hi

I only found that just opened, I noticed that it had been used in some way, and immediately after asking for info,

How did you know it had been used? Was the box not sealed? Were the films on the jog and on the display?

Ok cool, that fills me with more confidence at least. I guess all I can do is wait for Denon to get back me or for the team on the forum to see this post before I can proceed with a repair/replacement.

Thanks for your help!

the seal could be seen that it had been opened, then as soon as it was taken out of the box I realized that some knobs had been turned and left in position, the protection on the jog was there and also on the display, but it doesn’t take a genius to understand that it had been somehow proven. It was also noticeable from the feet below that it had been resting somewhere.

I immediately contacted the assistance, and they apologized in telling me that they did not warn me that the unit before being shipped, was tried to eliminate doubts about its total functioning.

In fact, it would have been absurd if they sent me another unit where he had the same problem.

I contacted my local Denon DJ dealer here in the UK, where I bought the unit from, they sent a courier to collect the faulty unit and sent it back to Denon. Denon then shipped me a replacement which I recieved about 2-3 weeks later. I’m hoping they tested my replacement too before shipping it to me. Can you imagine how annoying it would be if the same thing happened to the replacement too!

Anyway, I can’t really complain, the issue has been sorted with minimal hassle. Here’s hoping the replacement unit doesn’t develop any faults, as the Prime 4 is easily the most satisfying unit I’ve used to DJ with, but it’s only good if it’s reliable! If this one breaks, I’d have to consider going back to Pioneer which I really can’t be bothered with now that I’m getting used to the Denon and Engine Prime for my music management!

Before shipping the replacement, they normally test them beforehand (at least on the same issue).

That’s reassuring to know! Anyhow, I’m just glad to have it back in the studio. I’m more and more impressed by the Prime 4 each time I use it and learn a little more about it!

Thanks for the reply, Reese!

the strange thing … and that nobody sees or reads any more of Denon here in the forum. Why? does anyone know something?

I really don’t think Covid is keeping them away.