Is Traktors bpm Meta Data stored within the track

the new denon prime 4 firmware update sees the prime 4 able to use bpm analysis meta data and as a result is left unanalysed by denons software.

DOES TRAKTOR WRITE THE BPM META DATA TO INDIVIDUAL TRACKS?

does this mean that we could possibly use traktor as an analysing tool for denon hardware?

please tell me it does, because the same update will be on its way to the sc5000/m’s

DOES TRAKTOR WRITE THE BPM META DATA TO INDIVIDUAL TRACKS?

Traktor tag has 3 settings for managing tags and analysis info. I believe the 1st option will write stuff to the tracks id whilst the 3rd option which I have mine set to doesn’t write anything to the track. 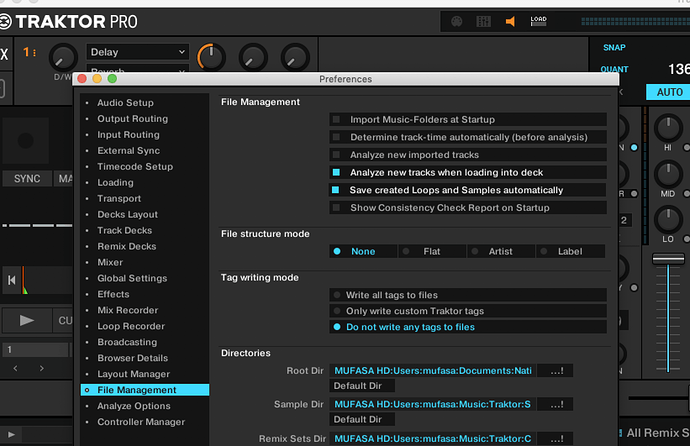 Whilst I don’t use Traktor much I still keep an eye on its progress.

Hi @andyfoz, thanks for posting! I just tested to confirm and yes, Traktor does write the BPM metadata to individual tracks. After importing a Dubstep song with no bpm data into Traktor and then analyzing it, I then imported the same file into Engine PRIME as well as iTunes to confirm that the BPM data stuck, and it did.

Guess its a future version of Engine Prime you have testet with, @Nekoro_DenonDJ

Not this time, @Engell. I’m current like all of you.

But will the BPM then stay there after EP has made its ‘forced analyze’ or is that only in the upcoming version? Just asking, as I would rather use eg. Serato or RB to analyze my tracks, since the EP is bad at that part, and there (still) is NO way to manually correct wrong bpms on the SC5000s…

I could write the wrongs down when I encounter them, and do it in EP after a gig, but with +70k tracks, that a lifetime mission.

I just tried it out with one track with Traktor (that’s what I used prior to my Changing of the Riders), and it all worked. If Serato or Rekordbox share this functionality alongside Traktor, then you should be good! just give it a shot with one song like I did…no harm, no foul, right?

Then Import the data from Serato to Engine - it still corrects the BPM and no Hotcues show up. It corrected the track from 75 pbm to 140… Thats not even the correct ‘double’.

you need to be aware that this feature is only available on the prime 4 as it has newer firmware - hopefully it will be coming to the sc5000 soon.

Thanks correct @andyfoz, the new ‘trusted BPM value’ import process is only available to PRIME 4 hardware but will be in the next Engine Prime update coming soon.

@andyfoz - thats what I was expecting, and asked Nekoro to confirm, but he said that he was using the same EP as everyone else, when he did the test from Traktor.

If the system still analyzes the file but ignores the value it finds, it would be a valuable option to be alerted of the discrepancy. Perhaps file by file or in the case of an imported list, a list of discrepancies. Just a thought…

hes using the prime 4 mate, current firmware same as everyone

Yeah but I asked him directly about Engine Prime, because of this answer…

After importing a Dubstep song with no bpm data into Traktor and then analyzing it, I then imported the same file into Engine PRIME as well as iTunes to confirm that the BPM data stuck, and it did

I am using Engine PRIMe 1.3.1, as everyone else. The new ‘trusted BPM value’ import process is only on PRIME 4 as @Jay_DenonDJ stated.

We don’t believe you

You have to be on some Alpha Prime 2.0

just admit you made an error, its all there in black and white. case closed.

If I was aware of which error I made, I would. But cant figure out why I cant get the info in to Engine Prime, when Nekoro statens that he can… I would gladly acknowledge if I was wrong, cause then I had learned something

i dont really want to go on about it but maybe if you read the whole post again. you will see time and again that you were told the firmware was specific to prime 4 the controller.

and does the feature work with traktor bpm’s.

do you understand now? :)