i had a look around the mixer forum section but didn’t find something related so here goes:

the HPF (filter knob right half) comes in way too strong. even when i turn it as little as i possibly can to just leave the center snap by a millimeter or so, way too much of the bass is gone instantly. impossible to accomplish a smooth transition that way.

is that normal or is my device bugged?

No problems here. Set type to bleed. Resonance to 0.

unfortunately no difference. i had resonance at 0 already and bleed or kill doesn’t seem to make a difference in that regard.

it’s not that much and depends on the genre. techno in particular where the bass is very deep, with these tracks it’s quite a jump. the very low end doesn’t seem to be included in the filter’s curve. like it’s starting at 50hz or so. for everything lower it’s therefore just on or off.

I guess I got used to it. My main genre is also techno (Oscar Mulero type sound) and I must say, getting bass out quickly is indeed a slight turn to the right. Don’t know if that turn changed so much with last firmware.

anyway emphasis on “slight turn” and that’s even overstated already. for testing i tried https://www.beatport.com/release/freedom-of-expression-dark-acid-mix/2962476 but it goes for any track with a proper low end. just the least possible turn to the right and the bottom is completely gone.

Ehh yeah “to the right” my bad…will edit that post.

I have my EQ set as iso. Don’t know if that would effect the filter.

have mine at iso as well. i even changed the crossover freqs to see whether that might affect the filters as well but no.

it’s a pity because the way it is i can only use it for bass cuts/swaps. however, actually i’d like to use it for transitions instead of the bass eq. that way i can keep the bass crossover low for sound shaping instead of transitions. at least that was the plan

as an analog guy i didn’t come across a lot of digital mixers so far. for example how does the hpf behave on other mixers? pioneer, rane, a&h … is it the same there?

On the Rane 2015 the bass will even slightly be increased on the first small increments of the turn (especially with higher resonance), which is expected behavior.

interesting. so it first increases a little, then goes to 0 and only turning it further from that point actually starts the filter?

anyway i sort of found a solution or at least workaround, whatever you wanna call it: the key is the resonance. the higher, the less this problem occurs. at 0 the “jump” is the worst and at 15 it’s like what @KevinBasher said of the mp2015. i tried all values and the best compromise seems to be 5. not much of the annoying swoosh effect but not too harsh a cut either.

however, i would prefer a slower and more linear increase at the beginning and maybe even a small tolerance after leaving the “snap area”.

interesting. so it first increases a little, then goes to 0 and only turning it further from that point actually starts the filter?

When having a high resonance, the frequencies close to the cut off are increased (red circle): 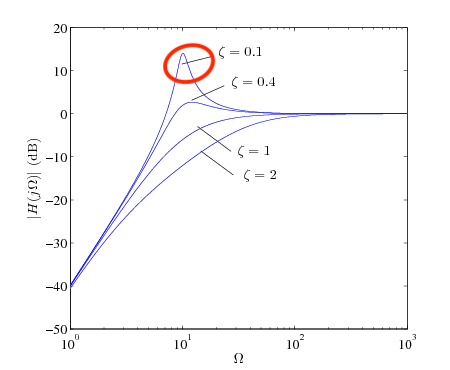 That means starting at the lowest frequency, the frequencies close to that (still very low) will be boosted. So it’s normal to have an increase in bass frequency to a certain degree.

Maybe @Reticuli can chime in and give a better explanation (english is not my first language).

Normally bass boost is not even as noticeable as treble boost/compression/ringing on a filter with resonance, yet here it is flip flopped on this knob. Compared to the left direction, the right side resonance and/or the curve seems too much.

So less resonance on the right side per the utility numeric setting and maybe also a slightly more relaxed curve to right might work better. Left could maybe use a bit more resonance bite per utility setting but curve is probably fine. So whatever utility resonance number, add one or two to left and subtract that from right.

Pioneer, Rane, and Mackie seem to already strike a good balance. Arguably the DB4 has their filter resonance & curves kinda wanky, too. I want to say from memory the channel ones are similarly off to the current x1800 and the DB4 crossfader ones are the opposite.

so this changed in 1.3? was it better in previous versions?

I don’t remember if it was any different before. I noticed it beginning in 1.3.