Found that the SC6000m works better without the slipmat and disc

So, I have just got my SC6000M, the unpacking experience does not disappoint. Outer box, now each with a kittie inside. Inner box, lovely quality, not like the rubbish you get from Pioneer, it even looks like they may have considered that people may use the box for carting them around. Doing the first software update, total nightmare. I have no idea how I actually did it in the end. Wifi connection works great, but seems totally useless. I expected to be able to see my DNLA media server, but no. My first interactions were good, went around turning load of stuff off. I wish I could disable other things too. The bpm counter lies worse than a Pioneer salesman (or Boris, you choose). I would love to be able to switch that off, each time I touch the platter it throws me – because the bpm should change with the actual speed of the platter. The first thing that went was the slipmat and disc, that feels nothing like a SL1200 (more like a Stanton 50$ beltdrive). But without the disc and mat, it’s another story (I hope that doing so, won’t damage the motor) honestly, very quickly I felt right at home, although I did have to abandon my normal spindle tweaking.

Edit. I agree, I too changed out that shyt slipmatt, platter and disc 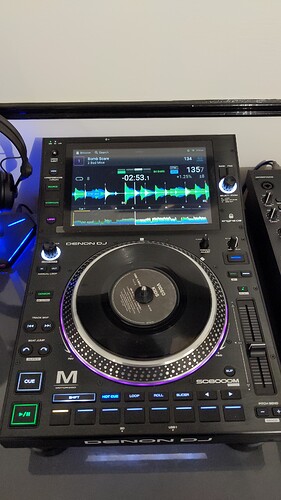 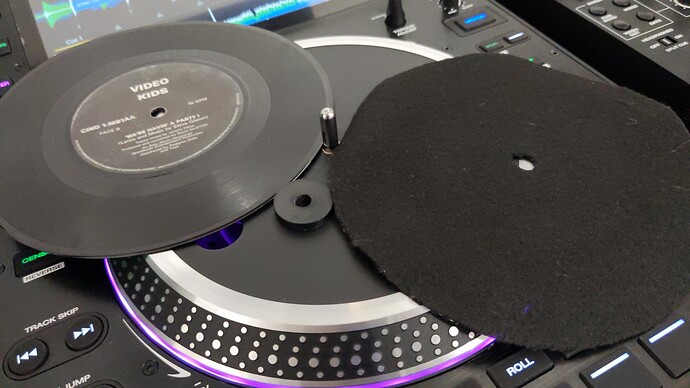 Is the black thing on the spindle grabbing it (like, is it rubber?)

Yes mate. It holds the vinyl and grips the spindle perfectly. As long as the washer is pressed down it feels great.

Was thinking of glueing the washer to the vinyl but wasn’t any need.

It’s a standard tap washer and I drilled the hole bigger to fit over the spindles.

You can pinch & twist, drag & nudge but backspin’s are tricky from the strong bite. Rane one platters with strobe dots I get the full oldskool feel.

I had to get some felt and cut the slipmats but you can get 7" ones but they are made for scratching and prob be will be to slippy for me.

Not sure why they don’t keep the strobe dots like they did on 37\3900 as feeling them under the finger gives far greater control over a smooth platter.

How well does pinch-n-twist plus nudge work for you?

I tend to push on the label when using my turntables which failed miserably when I tried it on my S4 mk3 resulting in the “belt drive” effect which put me off buying the M’s.

Using the label, run out, spindle or platter edge it all feels the same like using high torque direct drive decks.

My mate has the S4 mk3 and that doesn’t feel like it should. It’s one solid jog which doesn’t work…you forcibly change the direction of rotation unlike a platter constantly spinning underneath.

I too, wondered why they didn’t keep the dots. The ridges, don’t feel nice on my hands. So following your suggestion, I went through all my old rugs, and found the pair that worked the best (which also happened to be my favourites

). They are a pair of Numark sponge mats, that I originally got with a pair of TTX. Cut them down and am using them with the 6Km’s record thingy. I’ll keep testing.

Firstly, let me explain. I am an old school House DJ. I don’t play old toones, but really cool, new, tastemaker stuff. However, I learnt to DJ before pitch controls. So, although today I do use the pitch, more typically it’s to get the right key, rather than the right speed. Then when mixing I normally chase the beat with my fingers or brake it with the spindle (or a bit of both). This is why beat grids and quantising everything drives me mad. And the BPM counter on this thing an unwelcome distraction. There is a learning curve here, however, to me, it is very important that this new “amazing” technology doesn’t mess me up. I often play SL12s in clubs & festivals, and I don’t want to change that, it’s just that, sometimes we are playing somewhere and it just is not practical to take the Technics.

Now, having changed the slipmats for a pair of cutdown foam ones, the machine (in high torque mode) feels very similar to my SL12s. I also discovered, during testing, that basically you can get a 12" record on these, it covers the pitch a little, 10" works great.

Can the Rane One’s platter be bought by itself? If so, what did you pay for it? I am looking to switch out my 6000s for 6000Ms, and would LOVE to have this right from the beginning.

Yes. I got them from InMusic here in the UK.

Think I paid something like £70 each for them last April. I didn’t get the control disc or extra clamps & matt’s as they were really over priced.

Yeah but they are more expensive than going direct to InMusic.

Well, 70 pound is approx 95 usd today. Depending on where you live transportation comes on top so I would rate them similar price…

Bumping this as can;t see how to dm on this forum. Thanks for this great info - I want to do the same as you. Do you mind letting me know who the InMusic contact was? I emailed them and it went into the void. Cheers