Has anyone tried Evermix 4 via the master unbalanced phono? I have issues with the built in recording within the Prime 4 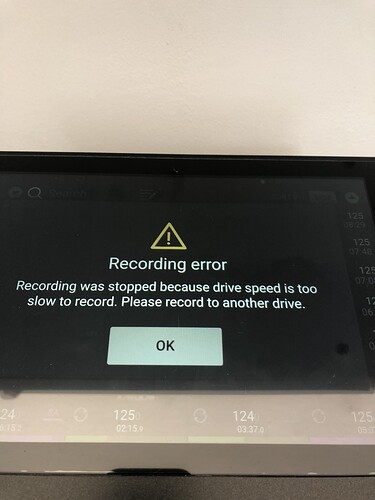 It clearly says that the data transfer speed of Your usb stick or other media is too slow for recording. Get a usb 3.0 stick or a ssd drive and then it will work.

Get a usb 3.0 stick or a ssd drive and then it will work.

And don’t use the same usb 3 stick that you’re pulling tracks from.

Thanks for both comments will do.

If you are wanting the Evermix Box 4 for other functionality then I can highly recommend. Allows you to edit and upload mixes direct to linked Soundcloud and Mixcloud accounts

May consider a SATA drive once EP is updated a little. I’ve got a workflow I’m happy with at the moment (as EP is far from perfect) so I’ll stick with that for time being

I have a SSD installed internally and it happened to me as well. And pls dont tell me i shouldnt play tracks from it and record at the same time. If the build-in controller is not able to handle this minimal data flow it`s nonsense…

Of course i can use another stick. But cause of the “special” internal recording i record externally via line-in anyways.

Check the max data flow on Your ssd. Not all ssd’s are fast in writing data.

Thanks am considering the Evermix 4, I take you connect to the unbalance master outputs? As no record outputs

Dude are you serious? Even some regular SATA-HD would be fast enough. Sorry to ask that truly.

As You said - some (not all), we all know that some computer parts are way under the quality of others.

Yes I have the evermix 4. Initially bought it to attempt some live steaming to Periscope - but my internet connection wasn’t the best and kept cutting out.
However as a recording unit the recorded sound is excellent - better than the internal Prime 4 recording. Clarity is much improved. I actually plug my main speakers into the booth out so that I can set the master level at ‘0’ to output a decent level. Good that you can the save the recording straight to your phone as well to listen back in headphones.

I could hardly tell the difference in sound quality from the recorded song and the original that I also had on my iPhone.
Good bit of kit.
I did have a few issues when the evermix box wouldn’t detect any sound (should light up blue) and had to do a reset. But once it got going again it was fine.
Worthy of £100 for this useful gadget.

Since my post a couple of months back im now having issues with the he recording quality of the evermix 4.
Previously I had just test recorded a few tracks and was impressed with the quality.

My levels were in check during each session with the levels averaging around 0 and only ever peaking into the 3 to 6 range.

The evermix is also supposed to have its own built in attenuation software to eliminate distortion.

On my latest recording I also set the prime 4 master limiter to 3bd. I’m wondering if that actually made the recording worse? Previously it was set higher and I only got occasional problems. But regardless I have had recording issues new with EVERY lengthy recording. What’s concerning is that sometimes the bit crush distortion sound will kick in during a quiet part of a song and then drop out again.

I’m wondering if the box itself has a hardware fault or if it’s the software in the app? Each time I made sure the phone was in airplane mode to avoid any unwanted interruptions such as calls texts alerts notifications etc.

Anyone else had better luck with their Evermix 4 box recordings?

Did you ever try to direct record straight off the P4 using a computer and line in to compare? I don`t think the used output has issues but maybe worth a try.

It sounds much more like the Evermix box or their app that’s to blame - especially the slowing down and speeding up part. Surely you’d hear that happening live if it was the Prime 4.

Maybe try making a recording on the Prime 4 at the same time as using the Evermix and compare results.

What iPhone are you using?

I’m sorry, I don’t know of the ever mix but the speeding up / slowing down thing zones like encoding lag. Ie the evermix can’t keep up

Many such devices have cheap slow brains so can’t take in data, and process it, and save it quickly enough for long periods. 5 mins at a time they. An cope, maybe 10 or 20 mins but after that they get “out of breath” and slow down, trip over, catch up etc

That “ process it “ can include the box trying to convert the file to a compressed or otherwise processed format. So, if the evermix will support different file formats, you could try finding a recording format that gives the box less of a headache. Like mp3 needs the evermix to convert and take time and brain to squash the music where maybe WAV which is uncompressed, so needs less brainpower to record it, might not trip over itself so often.

Hi. Thanks for the responses.

Yes I’ve previously recorded from the same master out into my Mac using audacity and never had problems. It’s just a faff then having to edit/split tracks/import etc. I wanted the Evermix box to provide convenience and better sound recording quality. I can also record I to the P4 hard drive without issues.

Did another recording this morning - just put the P4 into continuous mode for half an hour. This time with the limiter setting off and keeping the level below 0. The recorded waveform had plenty of headroom and yet 10 mins into the recording the full on distortion bit crush sound kicked in for the remainder of the recording.

I’ve even tried replacing the RCA cables with more heavy duty insulated cables in case there was some kind of interference, but made no difference. Another unsuccessful recording.

An interesting point made by DJ Sontag - I’m currently recording at 320 AAC to save space. It does have a WAV ability so will try that and see what happens. It does feel like the box/software is struggling to keep up with a long recording. Recording individual 5 or 10 min tracks seems ok.

Otherwise I think I’ll have to go back to the traditional lap top recording or internal hard drive method.

Think I’ll get in touch with Evermix and try and get an exchange and see if it happens on another unit. This unit is designed to do live recordings in clubs and upload to soundcloud etc, but if it can’t record more than 10mins without failing it’s pretty useless.

The box may be designed to do that, but the phone is not. It’s just a phone!

I wonder if there are other recording apps you could try with the Evermix, or if it’s locked to the supplied app.

How much storage does the phone have? How much is free? Are there many apps installed?

I don’t know how the iPhone handles “space management” but maybe there’s an issue with contiguous storage due to lots of apps being installed & uninstalled over time - like HDD fragmentation.

In my personal opinion you’d be better off with a portable digital audio recorder (i.e. Tascam DR-05X).

I think the evermix is specifically designed to work with a phone - Android or IOS.

The app is part of the product and I don’t believe you can use it with any another 3rd party app.

I’ve reached out to Cocksy81 to see if he’s had similar issues with longer recordings, as it looks like he has one and highly recommends it.

Will keep tinkering in the meantime!

I think the evermix is specifically designed to work with a phone - Android or IOS.

If it has USB C (in addition to the lightening) connect it to a laptop, record in audacity. Use the evermix as a soundcard.

If audacity can keep up, then you know the box is not faulty.

Did you try using an android phone?