I have a song where after a slowly building section, there’s 2 “extra” beats before the drop.

This means that half way through the song, the bar tracker is now 2 beats off where it should be, so any other tracks bar-sync’d to this one have their bars mis-aligned by 2 beats.

Is it possible to shift the start of a bar mid-song, to correct for this situation?

In the image below, the big arrow shows the point in the song is where the bar actually starts.

Either of these would accomplish it:

Yes you just need to lock the beat grid/insert a new anchor point.

Explained in this video; 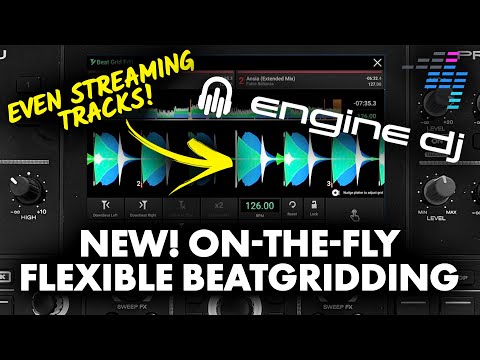 I’m familiar with setting anchors, but they seem to only be for when the tempo needs to change.

In my case, all of the beats align through the whole song - this isn’t a tempo change. It’s changing the number of beats in one specific bar in a song.

What I need is to move the downbeat using this button:

Ahh ok yeah sorry I see what you mean now. There kinda is a way of achieving what you want but I don’t really see what the benefit is, maybe I’m missing something (I probably am lol). The way I see it any track that is bar sync’d to that track will become mis-aligned by two beats regardless of where the red marker starts. I think the most important thing is that the grid is aligned to the beats, which it is. This particular track repeats this additional two bar sequence later on which then brings the red marker back to the desired position. So any changes would need to be repeated later on to keep the grid consistent. Seems like it would be a lot of effort for no obvious benefit.

The way to kinda do it is to set an anchor two bars prior to where you want the red marker to be then increase the tempo until the red marker reaches the desired position. Then set another anchor where the red marker now is and then set the tempo back to the original tempo. Be sure to use the cue button when setting anchors to ensure it’s snapped to the grid otherwise it can throw the whole track out.

Again I’m probably missing the point here so apologies if that’s the case.

There is a whole thread on this issue with a feature request linked below. It also has some ideas on how to achieve what you want to do whilst there isn’t an option to set the downbeat marker. Give it a vote too whilst you are there

Assuming the track has a regular BPM, I set an anchor on the downbeat of the measure with two beats then double the BPM. The next downbeat should then be on the first beat of the next measure. Set an anchor there. Reset the BPM back to the original.

This at least keeps the grid matched to the downbeats. An anchor grabs the nearest beat. This is why the BPM have to be temporarily reset.

I wouldn’t mix another track over that 2 beat measure. Although, theoretically if you are mixing a percussive track it should work fine.

A good work around.

Where I find it problematic is when I set sync setting to “bar” (not beat) and I launch 4 beat Ableton Link clips.

Where I find it problematic is when I set sync setting to “bar” (not beat) and I launch 4 beat Ableton Link clips.

I think it’s user file, playback, sync mode. Not sure if that applies to a Ableton link as well or only to Denon DJ link…