Hello Denon Forum, how are you?

Yesterday I had the opportunity to taste the X1850 with two sc6000, I was so hype, I’m a Prime 4 user. When I tried I was a little bit lost with the mixer, it was totally different to the Prime 4 Mixer, so I thought about the Prime 4 Mk 2, I thought that MK2 should come with all the good things of the sc6000 and the x 1850, today I made the first idea of model of the Prime 4 MK2 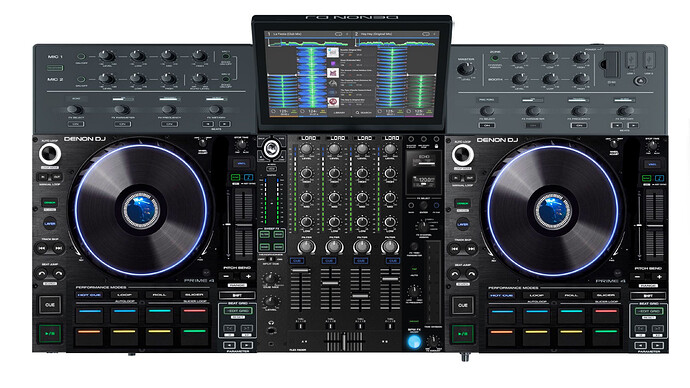 I know… I’m not the best one making fanmades, but this is to close to what I expect for the MK2, let’s analyze it 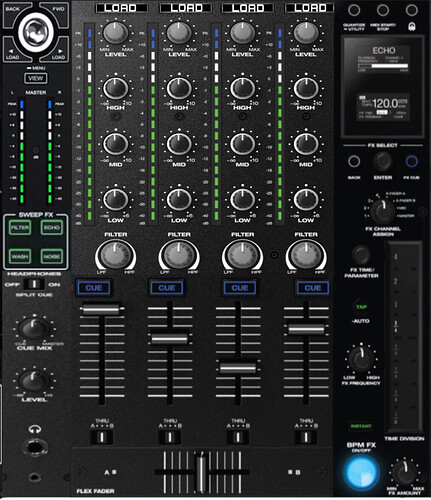 I tried to make the mixer similar to the x1850 and also similar with the Prime 4 mixer, why did I make like this? If you see pioneer, all the controller mixers are tend to be similar to a professional mixer, so in the moment you jump to a big mixer you don’t feel to lost, for example: XDJ-XZ & DJM-900NXS 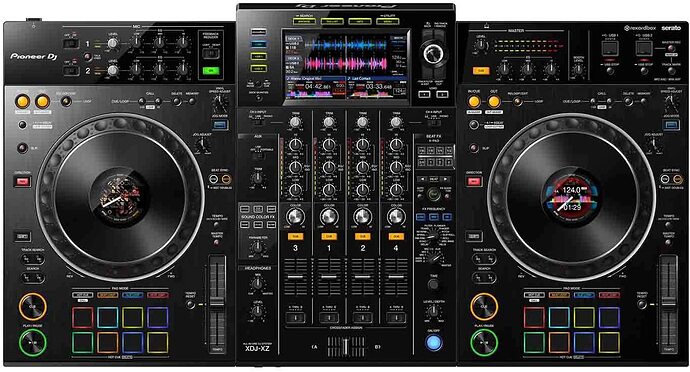 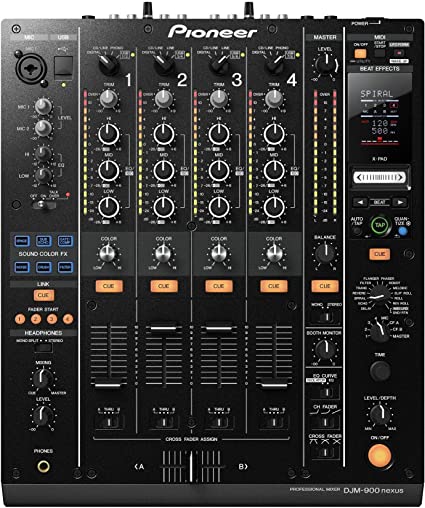 The mixer that i design make the MK2 mixer similar to the x1850, what do you think about?

Also, if you see, I keep the browse of the Prime 4 mixer in, I only move it to the left. What do you think about it? 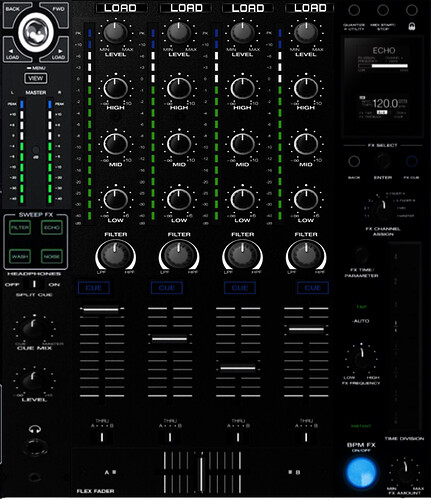 I put load buttons on top the mixer, I feel that is easier to load tracks like this, if you want to load a track to a channel you have to make two or three clicks, with this is a little bit easier, BUT also I don’t want to remove to actual ways to load, having many ways of doing the same thing gives diversity to the gear. 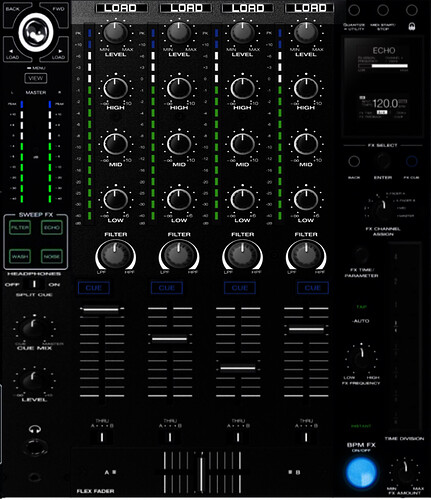 Down the browse, left to the filter knobs, there is the sweep FX buttons 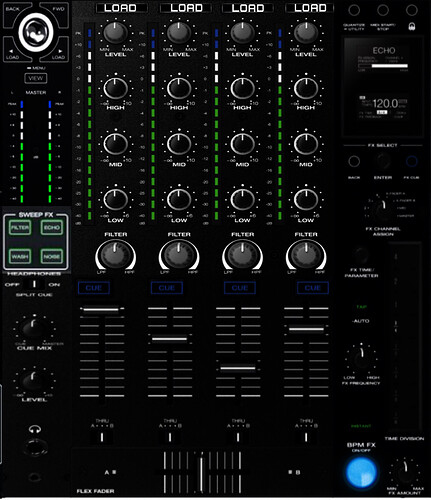 Down there are all the headphones tools 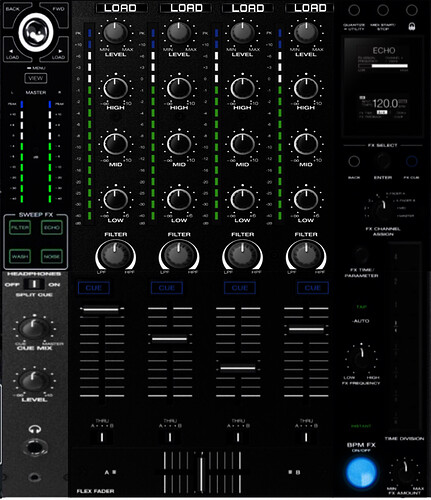 In the middle there is the 4 channel mixer 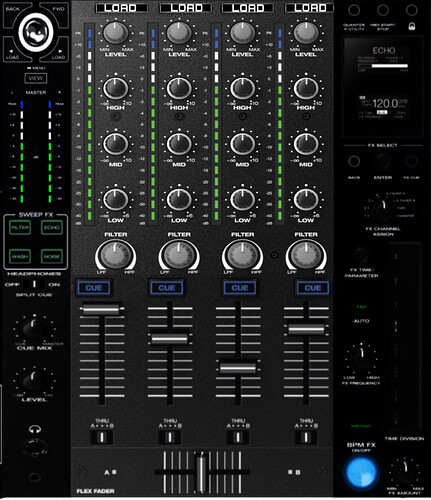 At the right there is all FX tools 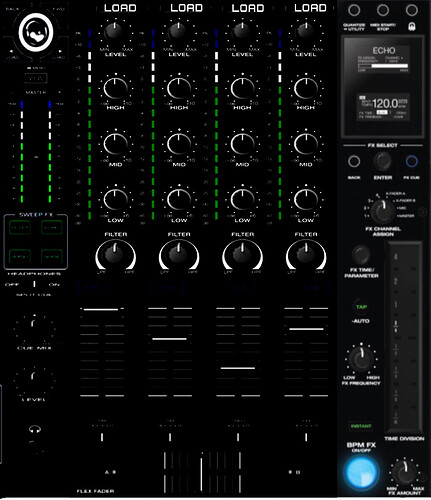 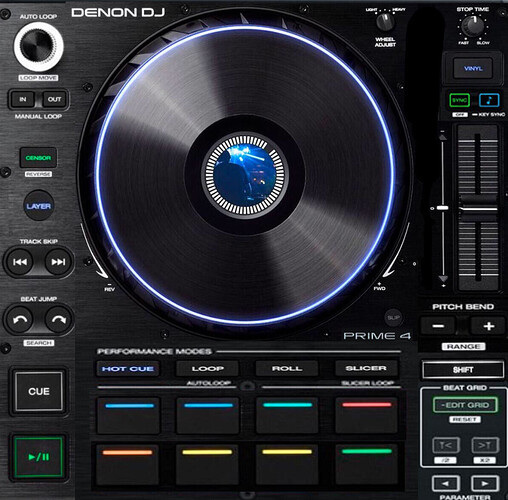 First of all, I know the proportions aren’t to well work, Im sorry for that

Jog: the jogs for the MK2 are the same of the SC6000, the same design, and same dimensions. The Prime 4 (the normal) have a good jogs… but they can be better, I’m sure everyone want a new prime 4 with the sc6000 jogs 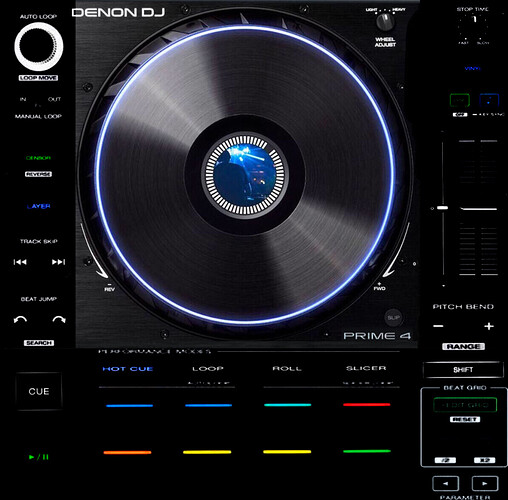 Jog adjust: A new function for the jogs, giving more possibilities for the DJ, this is cool for tricks

Layer button: I remove the Deck select, I mean, I change them with the layer button, I prefer only one button to change decks, what do you think? 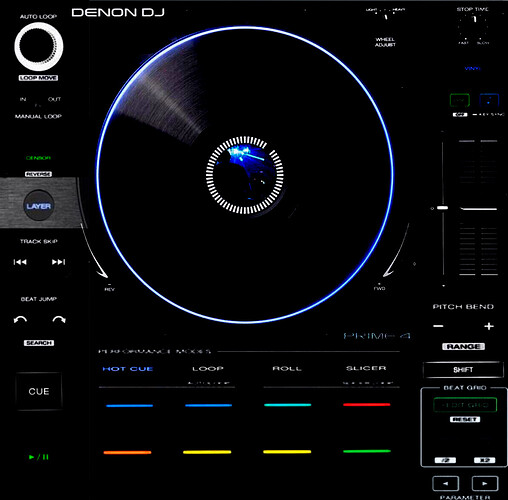 -New Style: I replace the Prime 4 style with the SC6000 style, style of buttons I mean

-Stop time: I know we have the stop time in the screen of the Prime, but like I said before, is cool to have many ways to made one thing, what do you think? 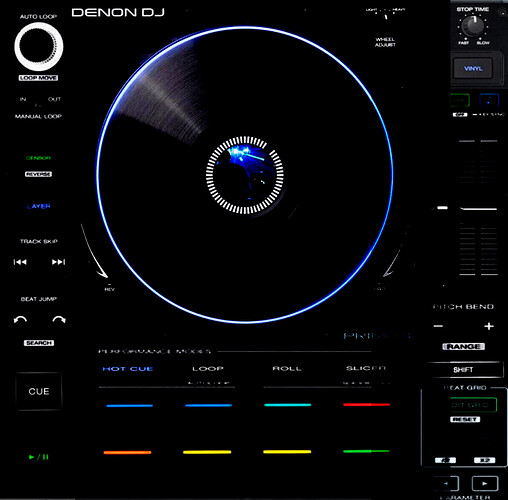 If you pay attention to this FX zones, I remove the FX1 and FX2 zone, why? I change them with a independent fx channel, I mean, now you could have a independent fx for channel, I have seen this feature in other gears, and is really helpful, for example the GEMINI G4V and G2V

What do you think about my ideas and design? And what are you expecting for the DENON PRIME 4 MK2?

I know we have the stop time in the screen of the Prime, but like I said before, is cool to have many ways to made one thing, what do you think?

No, it is not wise to duplicate functionalities. This just gets confusing for the user and that knob could be used to control something else.

I like it as an idea. Indeed it is better to have the FX control on the right side of the mixer (as obviously Pioneer always does), because adjusting the FX parameters in Prime 4 is inconvenient.

The only flaw is that every time they add buttons it will mean that the price will go up further.

Thanks, do you like the design? What feature you feel would be nice in the MK2

I don’t understand the usefulness of having the FX controls at the top and also having the effects on the right side of the mixer. You wrote that the effects can be set differently for each channel, but I don’t understand how this could be possible with only two groups of settings at the top, or with one on the right side. In my opinion the upper part should be removed and kept only the one to the right of the mixer as on the X1850.

Among the features lacking in the Prime series is the simple button to gradually reset the pitch without having to return the slider to center, when using the SYNC. This is a feature found on Pioneer for example. The design is beautiful.

For the independent Fx channel zone: If you pay attention, the fx of the top have screens, so when you change between decks this screens will change too, Virtual DJ have this option leaving a independent FX zone for deck.

And thanks for the reply, I hope more people see it, im so proud about the design, The mixer is my favorite part of it, i think is well distributed.

the fx of the top have screens, so when you change between decks this screens will change too,

Yes, I’ve seen that they have displays, but so what’s the point of having the effects on the right side of the mixer if there are others at the top? Which ones will be used?

You could have the possibility to mix 2 FX in one channel, or if you had the FX mixer in the Mic and you want to put some FX in a channel you could do it.

Let me give you a example of something that I make: I always put echo in acapellas, and also I like to put noise in one channel to play with the crossfader, if we only keep the FX Zone for the mixer we couldn’t be able to make this, you get it?

I always put echo in acapellas, and also I like to put noise in one channel to play with the crossfader, if we only keep the FX Zone for the mixer we couldn’t be able to make this, you get it?

Yes, that’s what we can do now using FX1 for echo paired with deck 3 (acappella), while using SWEEP FX (NOISE) on deck 2 (new song), while you can use FX2 with another effect on deck 1 (base) , for example.

I for one am really hoping Denon comes out with a MK2 of the prime 4 . Your design is a good start. I agree the mixer section should mirror the x1850. I’d like to see a browse nob on each deck… it may be a personal preference. But for me it’s muscle memory browsing on which deck I’m selecting it for. Love the bigger jog wheels. Moving the FX section to mirror the club mixer opens up room up top to add the bigger jog wheels and give room for the rest of the buttons. There isn’t a need to keep those as effect knobs. Denon is putting a great effort into making there own ecosystem in hardware and software. So making the prime 4 MK2 feel like there club gear should make sense. There more people feel comfortable moving from Denon gear to Denon gear. Makes it more likely to start seeing more Denon gear in more places. It’s for sure a page out of pioneer. But it’s extremely effective. A ddj-400 is not that different then a pair of cdj’s when it comes to work flow. A great start… now Denon needs to perfect it! Fingers crossed

Also… It would be neat if the MK2 had a screen that sat flush with the back when it is hinged down for storage. Ha

Haha, nice review, I also thought about putting browse for each deck, like a DDJ-1000, I’m working on a new fanmade of the Prime 4 mk 2 that comes with a group of features I want in the Denon Gear, for example I add a switch down the “In” and “Out” buttons, this switch will let you choose the direction of the loop, this is supposed to add the Loop Back Mode of Virtual DJ to Engine Prime. If you had any ideas for the Prime 4 mk 2, let me know for the Fan made :3

I was just thinking about this today. I googled “Prime 4 MK2 Mockup”, and this thread popped up in the search results. Personally, I think this is precisely the direction Denon should take the Prime 4. The XDJ-XZ has proven that people are willing to transport an all-in-one controller nearly the same size as the components they are combining (900NXS2/2000NXS2). I think the P4MK2 should mirror the LC6000 and X1850 spec for spec (mostly).

Some of the things I think would make it great are…

Charge $2,500.00 for this beast and I could not imagine many people would continue to choose a Pioneer XZ over this. We all know damn well that Pioneer are not going to add 4 Deck standalone to the XZ. It goes against their business model of selling you more CDJs. No, the XZMK2 will be similar to the RX3. Neutered. As per their slow, incremental hardware updating model. As for adding on complimentary components, the beauty of this beast (P4MK2) is people will probably want to buy additional LC6000s to pair to it and have 4 full size jog wheel control. Or, perhaps one LC6000 and a Akai Force or MPC Live since we now have Ableton Link.

Lord, I hope they make it. I know I would be one of the first adopters, and I already have SC6Ks, and an LC6K. I truly think an all-in-one of this caliber could be the catalyst that transforms the game in Denon’s favor.