I switched from using CDJs and RekordBox to using a Prime 4 with Engine Prime. I’m impressed with the system’s features and value for money, but I find it severely lacking in a very critical aspect: basic beat / BPM detection.

Supposedly there have been a lot of improvements to this in the last couple of versions of Engine Prime, but it’s still not even close to the accuracy or Rekordbox.

When playing with the CDJs, I could use sync it it would be nearly perfect each and every time. I don’t have to focus on that aspect of mixing. With the Prime 4; I have to make manual adjustments each and every time. It’s never ever spot on. It’s never exactly synced. And even when I sync it manually, it’s out of sync again a minute later, cause not only are the beat grids not exactly on the beat, the BPM is also usually slightly off, so it shifts.

Yeah yeah, it’s part of what a real DJ does, etc etc. But you’d expect a modern machine like this to take this aspect out of your hands flawlessly. Especially when competitors have been able to do just that for many years.

I love the Prime 4. Theoretically. But if there’s no hope that this will be on the same level as Pioneer anytime soon, I’m going to have to switch back.

I would like to add that the tracks I use are never exactly a round BPM figure. I play downtempo, where I pre-process many tracks to be 10.9% slower (2 semitones). So I can more easily mix them harmonically on a lower BPM. They do have steady BPM though. No shifts. Maybe this throws Engine’s algorithm off. Yet, Rekordbox has no issues with it.

Anyone else running into this issue? Is there any hope this will improve in the near future?

Did you import the library from rekordbox?

Try to use reanalyse with Engine Prime on a few test tracks and see if the results differ.

Rekordbox does tend to be a bit more accurate when analysing older Vinyl Rips, but I’ve found engine just as good and faster for Electronic Downloads that have no BPM drift.

I also tend to mix by ear, and only use the Grid Markers as a guide

The tracks are analysed in Engine Prime. Beatgrid is usually on the beat at the start of the track, but by the end of the track it’s off.

As said before, there’s no BPM change in the tracks I play. They’re digital downloads. They just have odd BPMs due to the preprocessing I apply. Rekordbox (and traktor btw) handles them just fine.

Of course I can always adjust by ear. But I don’t want to have to constantly focus on that. I’m not playing vinyl. Let’s not get into that whole debate. Engine Prime is way behind competition when it comes to beatgrid accurary. I would be sad to part with the Denon Prime 4. It’s an amazing piece of hardware. If only it had the software to match.

Could you share some tracks? Non- en pre-processed. Aside from copyright issues, Mufasa and I, at least, would like to see what’s happening.

The tracks are analysed in Engine Prime.

There are two different analysis mode in Engine Prime

Use Reanalyse and compare with the previous analysis

You could try the following which I’ve found to work in 1.6

Move Past and then Delete the marker with the Trash icon…it will remove the the marker, but you should see the BPM alter, and Grid correctly set

So I’ve actually tested my hypothesis. Tried to analyse the same tracks, before and after processing, but there’s not noticable difference. So I guess it’s not due to the odd BPM.

@mufasa I’m pretty sure analyze and re-analyze do exactly the same. Re-analyze is just to force reanalysis of tracks that have been analyzed before (with a previous version of engine prime perhaps). I really did analyse these new tracks with the latest version of Engine Prime.

I’m still getting lots of drifting. The beatgrid just isn’t at the same part of the beat througout the whole track. The error may be as small as 0.01 BPM or less, but it’s still off.

@johnnycoombes Yeah I do something similar now, but it means I have to manually check every track. It’s a hassle. And it’s not just drift… different tracks have the beat grid on different parts of the beat, it just doesn’t line up exactly like it does on pioneer.

Sure it’s quickly adjusted manually as soon as I hear it. But when I hear it, the crowd has heard it too. I want a perfect mix. Pioneer can do this, why not Denon.

It does not. One uses the BPM value in the tags or from the RekordBox/iTunes/Serato import. The other does not.

I’m still getting lots of drifting

When the grid isn’t on par, yes drifting will occur if sync is on of course.

Not an avid user, but how is RekordBox beatgrid analysis set; to normal or dynamic or other way?

I would still like to check the tracks myself to experience your findings. I feel blind here.

As Reese said, they don’t do the same thing

Use Reanalyse to force Engine Prime to use its own algorithm.

Engines Analysis option defaults to using whatever BPM the files are imported with. There is a difference in how each software writes the values eg 118.3 been stored as 118. This will lead to a drift.

Eg if I send you a track that is 100bpm but I wrote 80bpm in it’s ID tag value, Engine Prime analysis will also report it as 80bpm, but if you use Engine Primes Reanalyse it will ignore that 80bpm and calculate it correctly as 100bpm.

Post one or two of the tracks via Dropbox or something

Let us check it here.

Post one or two of the tracks via Dropbox or something

Posting some track names would be enough. At least then people can try things out themselves.

@wxwxw one question that comes to my mind is, how long are you taking to transition from track to track? It seems to me that a tiny difference like 0.01 of a BPM would not introduce a noticeable drift during a “normal” transition (15 to 30 seconds) from one track to another.

You say you “play downtempo” - what does that mean? Give us a BPM range.

Posting some track names would be enough. At least then people can try things out themselves.

They are his own custom edits

I would like to add that the tracks I use are never exactly a round BPM figure. I play downtempo, where I pre-process many tracks to be 10.9% slower (2 semitones).

Ok, so attached is a Mix from me, 2 Tracks that were Analyzed using Engine Prime Algorithm, and no manual adjustment. Also the mix had been made without any form of Sync. As you can see the Grid has stayed extremely steady and accurate. The only time I tend to see issues, is with older Vinyl or CD rips, and apart from the occasional track, most modern Electronic 4/4 Beats, seem to be correct first time 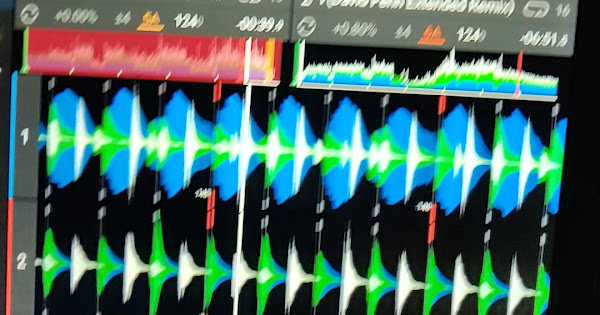 apart from the occasional track, most modern Electronic 4/4 Beats, seem to be correct first time

They are his own custom edits

Yes, I saw that he slows them down, but he also said they’re digital downloads - so they’re presumably some elses copyrighted work, not his own tracks.

It would also be helpful to see if the problem occurs with the tracks in their native (unprocessed) state - because we don’t know exactly how he’s processing them, or with what, or into what format.

I’m in the same case , bpm detection in not dynamic like rekordbox !! the prime 4 is a very goog machine but i’m playing old tracks of 70 and 80 ans the P4 is out of order for mixing live at the good tempo i’m swtiching for a XDJ-RX3 or XDJ-XZ

Then it’s much more likely that the BPM of those tracks will vary. The beatgridding process is not designed to deal with variable tempo tracks. The only way to have the beat grid follow the changes is to manually edit the grid.

I’m not aware of any DJ software which can successfully sync old tracks without manual intervention.

I have tested rekordbox dynamic analysis setting and I would not use it. Whilst it tries it best at gridding…maybe a slow drifting track , nothing beats a manual beatgrid for the 70/80s disco/funk/soul tracks

I never understood the sync function on the prime series. You have to manually adjust every single beat grid on every song in your library, then pray the sync works. Every time I’ve attempted to use sync and adjusted beat grids accordingly, they never aligned. I’ve had my 5000’s for almost 5 years and I’ve never once been able to use the sync successfully.

EDIT: Programs like VDJ and Serato don’t require you to manually adjust any beat grids, because they created those programs the right way. I don’t understand what Denon is doing when it comes to their beat grids, as they’re never automatically accurate… you always have to adjust them.

I bought a Pioneer DDJ-400 last week to prep for a gig on CDJS upcoming weekend. Just to have a smoother workflow with a device right in front of me on my desk.

I think I’ll be selling my Prime 4 after this and buying a standalone Pioneer. I realised this week just how much I miss how everything just works so much better in the Pioneer ecosystem. All my tracks are perfectly analysed and synced. I can go to the gig without having to worry the beatgrids are messed up and I have to fix it on the spot. I can just line up the tracks, press play and it’s perfect >99% of the time. It really saves me so much stress.