Ive noticed that when I have set cue points in line with checking beat grids on Engine Prime preparation wise,working from my USB drive connected to laptop when I’ve connected the USB drive to my SC5000M this track in particular I noticed today/talking about(has happened also a while back on another track worked on in Engine Prime with USB connected) well the bars basically were all over the show on the SC5000M eg: first bar/cue point showing,reading-146 instead of 1 where it was set in Engine Prime and because it was way too non feasibly out of the question to rely on beat grid edit on player to fix then I had to just touch reset on player which set the bars back starting at 1…2 etc but also noticed cue points had slightly moved off bar a bit also?

? Did two sentences get mixed up

When you hit the cue button, it changes the numbering. Anywhere you press the CUE button, that beat becomes beat 1

It looks like the front of one sentences then the back of another sentence. I get that problem when my hand is too close to the trackpad on my laptop, the cursor gets dropped into mid-sentence and anything I’m typing gets dumped in the middle of the sentence I last typed.

I used my iPhone for submitting my post however mufasa kind of cleared things up a bit for me…I think? God stay away from that Cue button then huh and just use play/pause just with the hotcue pads.Notice how the hot cue marker isn’t right where I want it on one track but on the LSG track it’s in line with the bar(where I want it to be) 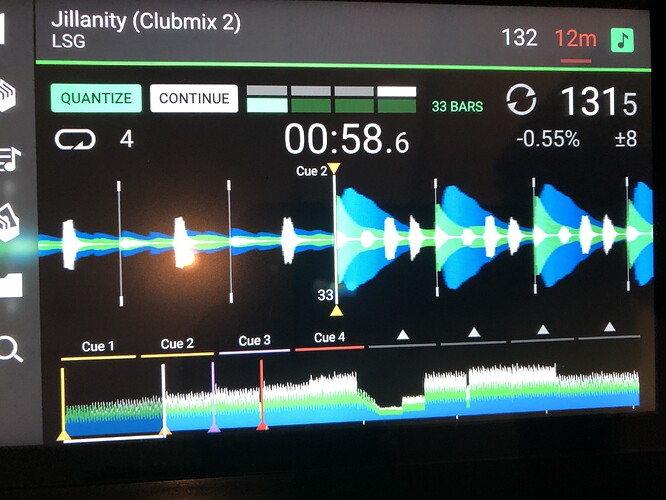 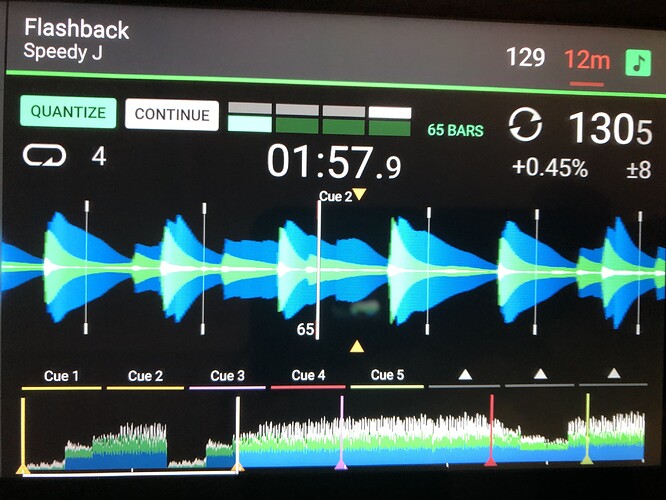 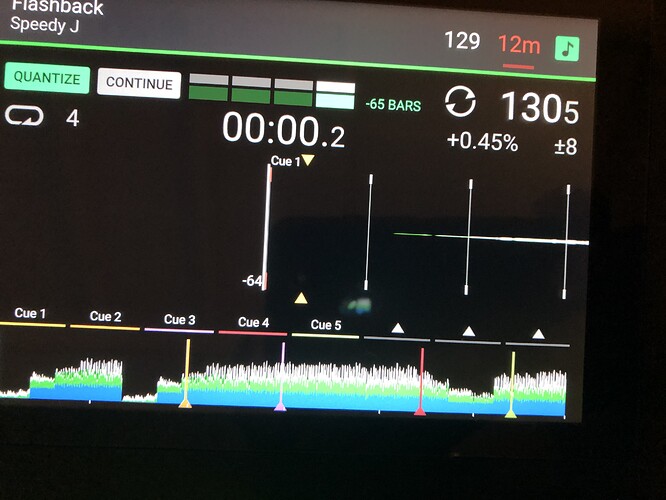 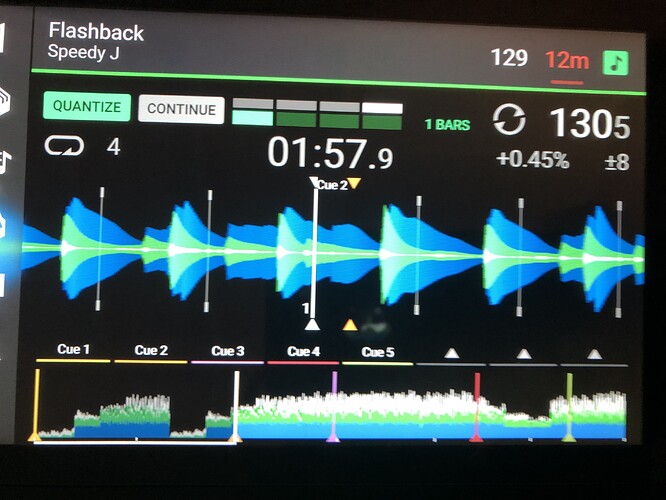 I don’t really understand the problem.

The beatgrid is wrong and so are the cues: That’s because you put them there (and that’s recorded in the Prime database). The system will not change them by itself, so the file must be altered outside Prime (lengthwise).

If you reset the grid on the player, the only thing you can do on the player is move it to left or right. You cannot contract or expand, yet (as you might know).

In your second track the grids are not lined up correctly, that’s why the HotCue isn’t on grid. This isn’t peculiar to Engine Prime, most software will often get the beat grid placement wrong in some tracks.

If you are happy with the BPM detected, just go into the beatgrid edit mode either on the player or in the software, then slide the grid to align properly.

You only have to do this once as long as you don’t click reanalyse in the future.

I use Serato mostly and I often correct grids midset and this can be done on the Prime players as well. I wouldn’t worry about it.

The only thing that you can’t resolve yet with the Prime players is if the bpm calculated is totally wrong.

Not exactly, it’s a strange behavior I know. But at least you understand how it behaves now.

I also don’t understand why it was implemented this way. Maybe a feature request to have an option of “static grid numbers” may be warranted. If you start one I will give it a like.

Well I don’t understand you saying to me I just put the cue points in the wrong place(bars?)according to an incorrect beat grid when using prime? Excuse me but have you also happened to notice how crappy the grid alignment tool is in Engine Prime software anyway? If a bar reads 1 on the very first sign of an audio signal on the wavelength(like when you hear it if you pressed play on a track on a DJCD player… then to me it should be regarded similarly as such on software…not just putting/aligning the very first beat of a track on bar 1. I’m not the stupid one that has designed this flawed still left unfixed software am I? I shouldn’t of had to spend extra $ on 3rd party software(MIK)either after hearing about Engines BPM/Key inefficiencies. /2 x2 grid feature on its own just doesn’t cut it for beat grid/BPM adjustment tool however from memory I think it is in fact the white drop marker tool thing that sorts these things out?

We all know beat-grid detection in Prime is not always right. According to your example it should go a bit to the left to have perfect alignment. It looks like bpm is right in this example and the possible miscalculation of that, is yet another known problem.

You enabled quantize but the cues in your example are not placed on the beat-grid. Not even if the grid where on the beat. You put them there probably without quantize on.

It all looks like the track was analyzed, beat-grided and cues set. And after that the track was changed outside Engine Prime but retaining the same track name.

@mufasa and I are trying to help, explain and understand your findings.

So what is this topic about then? Seeking extra confirmation to known issues?

Edit: so the track worked before. Is it possible the track has been edited after analysis by Prime?

I will connect my USB drive to my MacBook open up Engine Prime work from the drive selecting the track in question(Flashback Speedy J) already BPM’d,gridded(analysed only by MIK) and see what the deal is there as I know I prepared it properly as I listened to,counted the bars,hot cued the phrases and they marred up…eg:17,33,65 etc

I will try and check the track also on my end. Normal version of this track of Jochem Paap (Dutch Hero

Prime hasn’t “analysed” my tracks I let MIK do that. I set auto analysis on Engine Prime to off. The track in particular I just reset it/shift button deleted all the cue points and because they were only slightly off the bars I had used engine prime to set them to then I was able to use the platter to adjust playhead to bars eg:17,33,65 etc and as long as I remember and reset if after tapping cue button on player then hopefully I should be Ok?

Okay but MiK only does the grid, bpm and key or…? Not the waveform?! (no experience with the software).

Wouldn’t that be the problem with some tracks?

Prime hasn’t “analysed” my tracks I let MIK do that. I set auto analysis on Engine Prime to off.

Prime analyses a track when the track is loaded into a deck or the software player. This can’t be turned off. Auto analysis deactivated only stops EP from analyzing tracks when imported to your library.

If you are happy with MIK cue placement then I don’t see a need to delete them in EP. Slide the beatgrid to the left or right to align them with the downbeat of your track.

I did the import thing into Prime. PN>MIK>itunes>import to Engine Prime(auto analysis set to off) MIK doesn’t import cues to Engine Prime automatically and MIK doesn’t have beats with numbered bars on its software player/analyser only time based cue points. I would rather just count beats/bars manually in using engine prime software as at least I have beats and bar numbers as references and I have had to adjust slightly sometimes the beat grid so the bars align up to where I want to then drop the cue points…eg:17,33,65…etc then continue counting whilst deleting previous cue points so I always keep my count until I have maybe only 2-4 cue points in my tracks. Sometimes last 16 bar outro might have to be cut back/extended accordingly. I also use the edit in the cue point field box and text in ST/ET(Start transition drop next track in on the 1,End transition fader over to side)