I’m having problems with my collection which was imported from Rekordbox 6.6.1 to Engine DJ 2.1.0 As per instructions this successfully moved my tracks including Beat Grid and Hot Cues. I have tried to Autoscript a good few of these in SoundSwitch 2.5 only to find that where Engine has placed an anchor to the beat grid, SoundSwitch seems unable to apply anything other than a low-level intensity setting of around 50%. It is noticeable that the beat grid markings in edit mode on SoundSwitch are highlighted, presumably where Engine has placed the anchors in order to match the tracks downbeats as analyzed by Reckordbox… 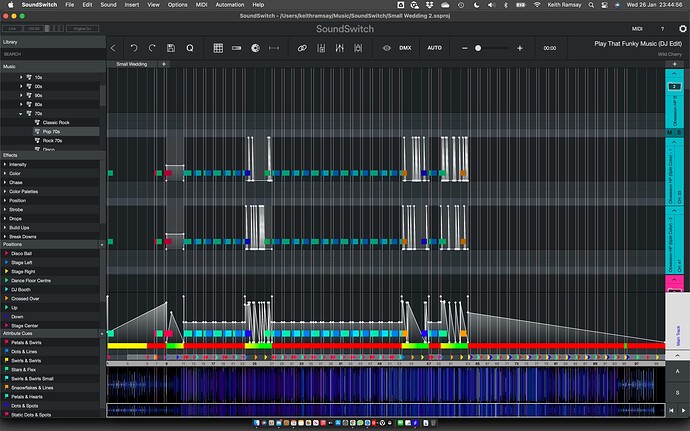 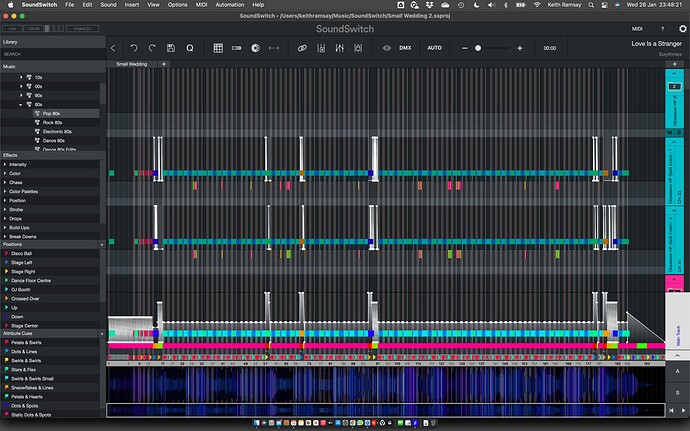 beat grid markings in edit mode on SoundSwitch are highlighted, presumably where Engine has placed the anchors in order to match the tracks downbeats

Yes exactly. Those lines are the points where SS sees the beat so at that point it places a change in brightness, a change of color or a move of a moving head.

I don’t see anything abnormal in the track script you showed in the pictures.

Maybe you are wondering why the lights are not very dynamic? Or why does the intensity stay at 50%?

If you want to make your lights more dynamic you have to select one of the autoscript generation presets among the most dynamic ones, then you can customize it by adjusting parameters to increase the intensity of the lights or to move the moving heads more quickly. You have to try with just one track so you don’t waste much time but then the result can be achieved. I got it and am very happy with SoundSwitch.

I think you are missing the point. Here is the track as analyzed by SS when it has been imported to EDJ from RB. 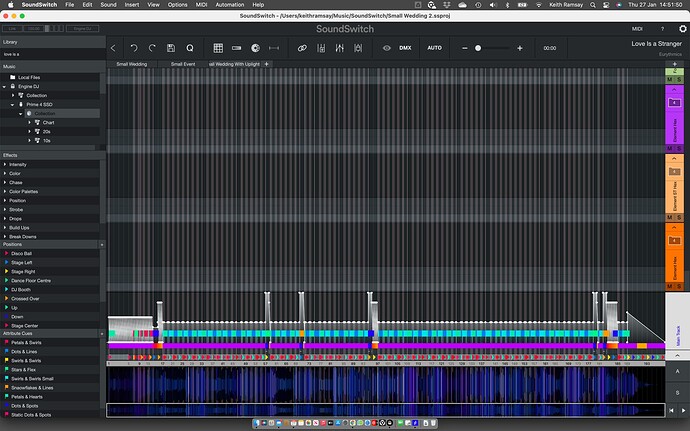 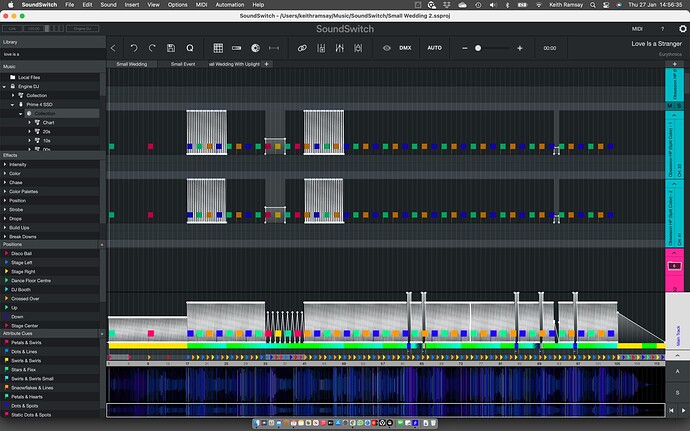 Screenshot 2022-01-27 at 14.56.351920×1200 250 KB
As you can see when the anchors have been removed SS will produce a normal dynamic light show. Where anchors have been added in EDJ, SS seems to link an intensity level across the board. This makes any track imported via RB completely unsuitable for auto analysis. Maybe not so much a problem from click-track music recorded in the last 25 years but pretty much anything prior to this will need anchors in order to have an accurate beat grid for SS.
DjAj January 27, 2022, 3:16pm #4

Perhaps it is better that @Matthew.W clarifies the various points.

Who the hell is Matthew.W?

Lol. That would be me. I invented SoundSwitch.

It looks like Engine is importing the BeatGrid from RB in an unexpected way and the anchor points are set so often that SoundSwitch is having difficulty calculating phrases based on those anchor points.

This issue isn’t likely to be fixed in the near term as this issues is caused by SoundSwitch getting 3rd party data, that’s been converted by Engine OS before being imported to SoundSwitch. That a lot of variables to account for.

One test to try would be to space out the anchor points with a more reasonable distance, say every 8 bars or so.

Difficult with nonquantized production as you have mentioned.

This is a difficult corner case to account for from our end.

Aha! How do you do Matthew? Thanks for the input. In the end, it just means you cant batch autoscript without having to go through each result. It’s more prevalent in tracks where the beat grid is marginally out, the irony being that even engine would have managed to give a half-decent result after analysis, which negates the advantage of utilising RB’s superior beat grid warping. The pain is then having to go back into EDJ and re-analysing and then re-scripting, which makes for a very clunky workflow. I consider it less of a problem in SS but more a reflection of Engine’s beat grid analysis, which while it’s improved dramatically since its introduction, it’s still way behind Rekordbox and Djay Pro. Maybe you can mention it to your colleagues across the hall?

Have been Googling around to try and find some kind of answer to my SS vs RBDMX questions, and this seems to have answered one I had.

Considering making the switch from RB to Engine as the idea of the Prime Go/2/4 + SoundSwitch is just awesome in comparison to any Pioneer product which also requires my laptop along with my RBDMX1.

Have just imported my library into Engine, and noticed a lot of my old funk tracks where I have had to hack the beatgrid around, have imported with anchors everywhere instead of 1 beat markers. I was going to ask how this would affect SoundSwitch auto analysis (I am not interested in creating my own lightshows, as this is a second job). Seems as though all my old pre click tracks will be an issue.

@Matthew.W , you mention this is a corner case, however I feel that this may become a more pressing case unless Pioneer can match the Engine Lighting system on the XDJ systems pretty quickly.

Although I think the problem is less with how SoundSwitch is analysing the data, and more how Engine is seeing the RB XML file, and then not attaching the 1 beat marker, which then confuses (quite understandably) SoundSwitch.

I have had to hack the beatgrid around, have imported with anchors everywhere instead of 1 beat markers