Anyone noticed on Prime 4?

Are the center screens on the Prime 4 showing more info than what we’ve had on the SC5000? That’s another wish of mine is that we have the ability to show more info on those babies.

I didn’t notice anything. What do you think you saw? Agree it would be nice to get a bit more info on there. I’d really like it to show some sort of time or scale when you adjust the brake speed so it’s a little easier to get both decks matchy, matchy!

I didn’t see anything but was hoping someone maybe did in all of the NAMM videos that people threw on YouTube.

I am seeing STARS… all info is displayed alongside the track, at last!. This lack of stars on the SC5K is killing me, really need to see my star ratings at a glance, not a long press. I seriously hope we are going to get some improvements in the next FW update.

Thank you all for your suggestions, there will be some firmware updates to the SC range coming very soon to bring it more inline with the options the Prime 4 has. I’ll pass on to the dev team your stars & info request.

Not to hijack this topic, but I noticed something that I would change personally.

I feel that SHIFT and SYNC should switch places. Makes more sense to me.

I’ve never really felt that just 5 notches is really enough to rate a track. It only splits a music collection 5 ways, or 6 if you leave the terrible tracks as zero

Don’t have terrible tracks in your collection. There, I just saved you a star.

If only we got to just play tracks we thought were 5 stars!

Sorry, but getting back to the original topic: I’ve been waiting for firmware and all that before posting about issues/questions/etc, but I think it’s worth saying right now that one of my main (personal) issues with the sc5000 is the total waste of screen real estate in the interface design when using/sorting/scrolling/etc. through tracks. I’m sure there were reasons for this design decision, but as gorgeous and amazing as the actual screen is, I feel like I spend most of my time looking at 1/3rd of it while the rest is just empty or useless space. This is not a complaint, but more of a ‘why’ sort of reply. Though I’m holding tight for the now-mythic sounding, imminent firmware upgrade…

RE: stars - I hope there is some sort of editable ratings system of tracks, but please maybe try to use something other than a ‘five star’ rating system…(easier asked for then realized I’m sure).

I agree - especially on the Prime 4. Make full use of the 10" screen. Don’t just make stuff bigger, put more on the screen. Giant waveforms? Don’t need 'em. I’d rather be able to see more than six tracks at a time when browsing. I also think it’s ridiculous that only the track name is displayed, not the artist.

I want to see the artist & title from each deck as priority, and as many tracks in the browser as possible.

Bearing in mind that the Prime 4 can be used with a keyboard (so having things big on screen for touch purposes is redundant), it’s a real waste of screen space to have only six tracks displayed at a time.

While I don’t agree on the waste of screen space, I do think it could be an idea to edit in preferences what one would want to see.

I like the simple interface. A Pioneer CDJ2000nxs2 screen just screams to much at me.

Not surprising considering the Prime 4 is using unreleased firmware (duh… it’s over a month from release) and according to Denon DJ the whole Prime series is a kind of common firmware code. One can probably assume that most of the stuff being worked on for the Prime 4 is already being worked on for the SC Primes, and vice versa. In other words, the Prime 4 previews are probably giving you a window into what’s been in development for the SC Primes. Hence you can probably expect to see various stuff on the unreleased Prime 4 previews you don’t see on the current SC Prime release firmware.

The first thing that made me doubt Pioneer DJ - the first real chip in my early enthusiasm - was after I bought my CDJ-2000nxs2 and had been using them at home for a month, I randomly got to play on an rx2 and was blown away at how much better the screen design / use of real-estate was on the $1700 rx2 than in the $4200 cdjs . I don’t know anything about Denon DJ or the their employees outside of what the company ‘publishes’ via the regular promotional conduits of professional hype, but it at least ‘feels’ to me like like the Denon DJ approach (to design, user interaction, etc) is radically different than that of Pioneer DJ’s approach. That said, I hope I’m not reading this in a few years thinking “darn…screen real estate usage once again was the first harbinger of sorrow…” Holding out hope enough to compose this visual poem for Denon: 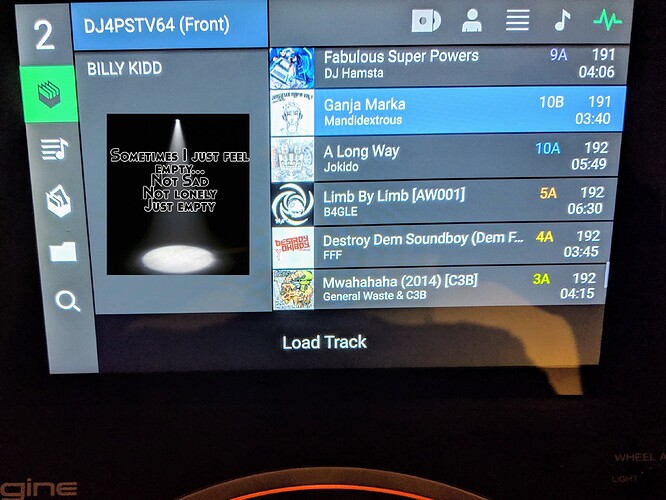 Everyone I know that uses the rating system uses it either for what the typical crowd response to the track is, or uses it for energy level. Using them for energy level makes more sense to me though.