I’m a new Prime 4 user, much better than Pioneer (Rekordbox was taking an age to update playlists).

Anyway, I just installed a 2.5" hard drive with my entire iTunes collection. All seemed to work fine. However, I soon noticed that some tracks were red in colour and wouldn’t load. I read all the threads I could, which suggested re-installing etc. - I’ve only just done it once, so I took a closer look at which tracks were red… it seems that if the title of the track includes a Special character (á, ä, é, í, ó, ú, ü, ñ) it won’t play. However, if the artists name field has a special character, it’s absolutely fine.

For example, Artists like Watermät, Michael Bublé and Beyoncé are fine… but if their name is in the title field (eg. Ed Sheehan (Artsist) - Perfect Duet (with Beyoncé) (Track)) then the track is in red. So all songs with an accented or special character like Chayanne (Artist) Salomé (Track) are red and won’t play on the Prime 4.

Could Denon fix this easily in the next update… or will I need to go in to iTunes and remove all special characters manually (replace all "é"s with an “e” etc).) and then re-import the tracks to Engine and then to the hard drive again…?

UPDATE: I just tried to do that with a few tracks and rather than them being playable, they have simply disappeared

Please help, Denon DJ - I have faith that you’ll fix this.

A little bit of info about the missing files with special characters.

The problem is UTF conversion, files with special characters are treated differently on each operating system, some OS can read the characters as is, others have to convert them to 2 individual characters. If you are packing files on Windows and connecting that drive to Mac or embedded hardware, this is when some of the tracks appear as missing.

The only current workaround is to edit the ID3 tags/filenames of those files to remove any characters that cause this problem.

For my part… I never had this kind of problem. I even named files with a filename containing a large number of special characters to test the Engine Dj Desktop software and the OS Engine Dj readers and everything works perfectly!

I use Jaikoz for file idtags and they are all id3v23 version.

You will find in screenshot, the idtag “Jaikoz” preferences in order to have a good support in the different multimedia players. 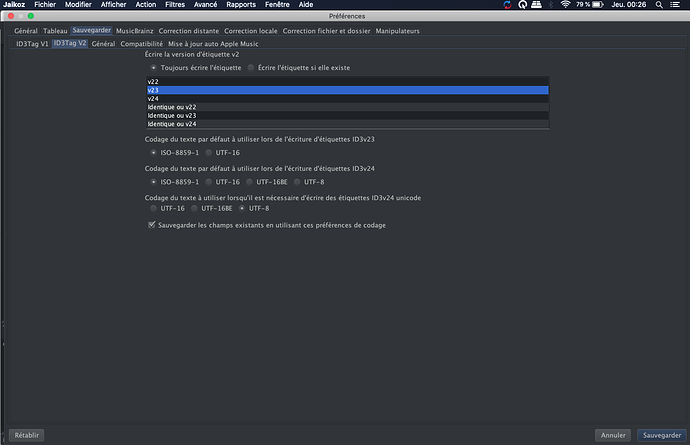 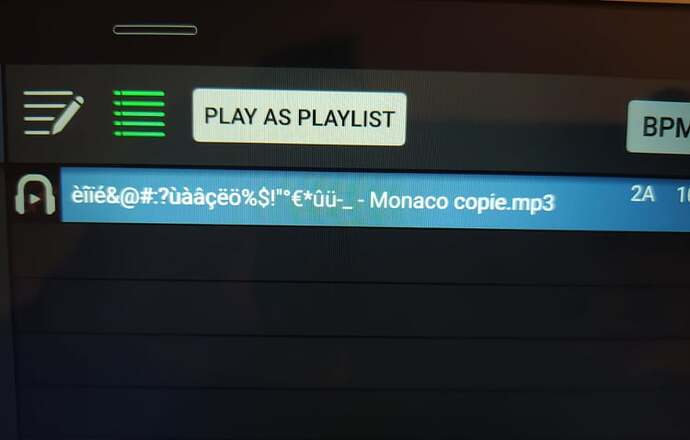 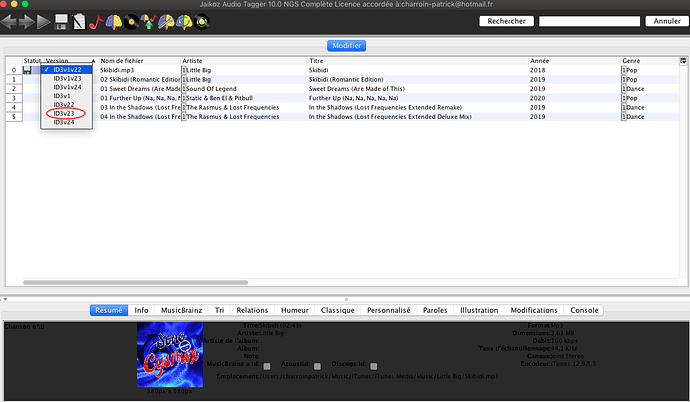 Do the filenames have extended characters in them? That could also be a source of issues.

Please be aware that if you rename a file you have to delete the original reference to it in Engine DJ and re-add the track to your collection. Unless, i.e., you want to edit the filename in your Engine DJ database in a SQLite editor. The latter should be done with backups and great care.

Thank you for that. It’s interesting that on my setup, the special characters don’t seem to affect tracks where the Album names, Artist names and all the extra metadata like Comments etc. are mentioned, but when it’s the Song name, it makes the track unplayable.

I refreshed the iTunes library in Engine after I made the first post, then removed the original playlists from My Collection, then re-instated the newly refreshed iTunes playlists. And now it works perfectly! I found that the issue affected all special characters (so would affect lots of languages (my Latin and Eurovision tracks were the most affected) except the upside down question mark and upside down exclamation marks which were fine. Weird.

Thank you for that. I’m not sure what you mean by ‘extended characters’ - do you mean if the song title is too long?

In the end I refreshed the iTunes library in EP, then removed the original playlists from My Collection, then re-instated the newly refreshed iTunes playlists. And now it works perfectly!

Such a strange issue in any case… I hope it helps someone who wants to be able to play some of those tracks that are stubbornly still in red.

I have found the same issue and solution and wrote about it here: Red Tracks on SD card or USB after using Sync Manager

For now you can use software like Mp3Tag to automatically replace special characters but you will most likely reimport these songs which means they may disappear from playlists.

Let’s push Denon to fix this as its a shame this kind of issue exists! Please help

In your tag software like Tagscanner, Mp3tag… you should probably be able to change the UTF version and the id3tag version to v2.3 just like in Jaikoz.

It’s good to know your solution.

ASCII characters 0-127 are considered standard. Extended characters are many others, including accented letters. There are many versions depending on the UTF set, UTF-16 being the most common one supported by file systems. Actually, those don’t seem to be a problem across current file systems anymore, so my question is moot. There may be issues if a file named on a Mac has special characters (within ASCII 33-126) that are not allowed on an exFat formatted external drive. There are certain characters, such as <>:?*, to be avoided in file names. The list is longer, but I have no problem using characters such as # and - in my file names.

For my part I use a Mac and a Pc and my two computers contain the same libraries in case of problem and also because I have apps that only exist on Pc or only on Mac.

But anyway that I go from PC to Mac I never encountered a problem with special characters!

So I use a Mac and interesting that when I put the same playlist through rekordbox and then export to a rekordbox USB, the sc5000 will import the rekordbox playlist and the tracks with accented characters will load and play just fine.

I also found that with an Engine prepared USB I can still use the file system browser icon and the file is in the appropriate place and can be loaded from there. What is weird to me is that using this method the accented characters all display properly. I would think Denon should fix this pretty quick but we got all the way to 2.2.2 and it’s still there.

The rekordbox usb actually works better than the engine prepare usb and I would expect Denon to consider that as unacceptable.

From my experiments what matters is the file name. I tried changing the file name to remove accented characters and then reimport the file to Engine. Engine sees this as a new track so it has to be added to the appropriate playlist manually, but this does seem to solve it. Unfortunately I just have too many tracks to be doing this for every one

You can try using Lexicon to organize your libraries and then export to Engine. Only it is a paid software, however, very efficient. I used it to migrate from Serato to Engine without failures or loss of information, everything worked perfect.

Yes I am interested in lexicon but the subscription model is a deal breaker for me.