The battery indicator, the horizontal chanel EQs, the autoloop placement, the sweep FX on Top and the channel fader just below, are really bugging me. This can’t a be a traditionnal controller, this would make a lot of headaches to djs when switching gears. I’m wondering if the G in 2G is not for something else like Groovebox or dedicated enGine controls… Anyway I do understand now why Denon DJ has dedicated a special event for this entirely new stuff !

I’ve a suspicion this could be the “workhorse” controller for the Mobile DJ’s. …a replacement for the MC6000. 2 main channels with just the fader & sweep fx in the normal central channel strip. Jog wheels & transport controls either side with horizontal EQ’s above, then fx above that on the left, mics & aux input up on the right. …then a 7" screen up top in the middle. Possibly battery powered. Let’s see how close I am on Monday.

Wow, would I be happy if the Prime 2 had rotary knobs instead of upfaders!

It’s either a tablet running Engine Prime or some kind of truly mobile device. I go with the tablet. Could be interesting, connect your tablet to an SCx000x over WiFi and use it as a display/controller for the second layer.

Wow, would I be happy if the Prime 2 had rotary knobs instead of upfaders!

That wouldn’t be bad at all. The screen is flat instead of angled so if it would be a small controller then the screen would have to take up a good part of the mixer space.

It seems like this will be a different type of controller not related to the prime4. 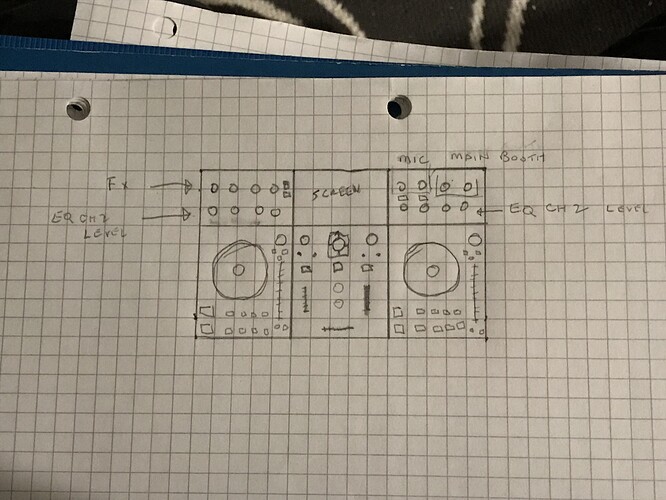 The pads are the same as my original kontrol s2. They’re not bad but I was happy when they changed it on s2mk2.

Who cares anyways cause the light coming off that huge screen alone will light up rest of the rest of the deck for you.

This article sums things up nicely. 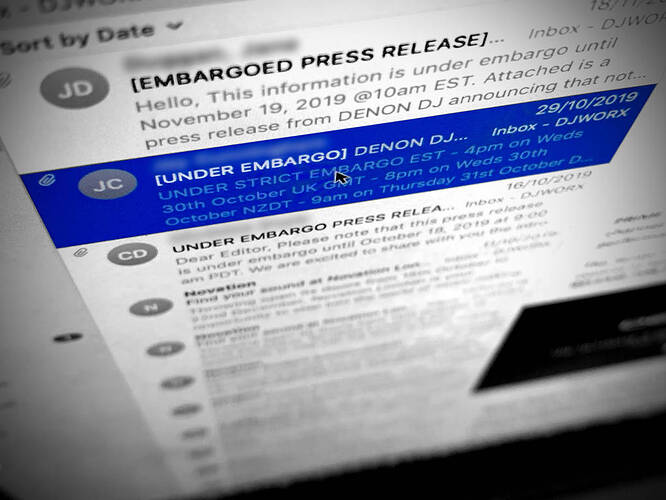 The product launch season cometh, so now would be a good time for this old editor to offer some words of advice, before the industry screws it up again.

What do you think the situation would be like if everything was kept secret and held for the last minute?

My opinion is that if you want to attract people to trade shows, which numbers of attendees are dwindling btw, give me a reason to come and not be disappointed.

In a week and a half it’ll be all over.

I thought people paid to go to trade shows to get the big reveal. Silly me.

The shills be shilling.

trade shows, which numbers of attendees are dwindling btw,

Trade shows and even DJ association shows are all dwindling badly and part of that is the various levels of bloggers and vloggers who practically stream their bursting through the doors, and showing off FREE online, without all the travelling, accommodation and lost wages (so many of these shows are held on Saturdays, a DJs busiest day, or Sunday when DJs rarely wake up until midday lol). All the shiny goodies are there on everyone’s screen, free, with manufacturer interviews saying what’s new or special.

It’s ironic that the DJ works Comments about “keep it brief” are in an article, longer than any review haha.

I see that some of the comments under the dj works articu are against the idea of new gear being kept secret until the day before 1000s of the new toy ships out to dealers.

I held off getting a second MCX8000 waiting for the amazing state of the art XDJ-XZ and what a disappointment that was.

Those were the good ol days. We live in fast food society now.

It seems like the 6k campaign started a little while ago. Introduction videos along with a hands on and performance video. You got stores already listing them, it’s like they’re ready to be shipped, stocked and released on command.

This makes me more intrigued about the stuff that are really under wraps.

Is that Phil from DigitalDJTips on the right? …i know he’s rocking a bit of a beard at the moment!

So presumably they were shown this on the recent trip to Denon HQ, when Phill also filmed the 1st look video for the SC6000 that’s on their site.