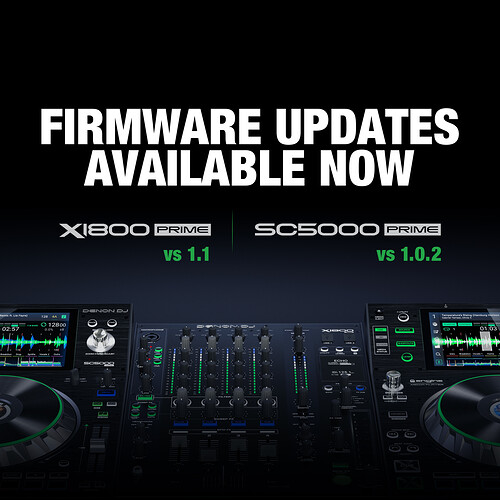 Greetings forum members. We’d like to give all of you some advanced notice that the new firmware for the award winning SC5000 Prime media player, and astounding X1800 Prime mixer.

● Fixed an issue where heavy scratching for several hours could result in a player resetting.

● Fixed an issue where remote playlists would show up in a different order than local playlists.

● Fixed an issue where an SD card warning would be shown even though no problem with the SD card reader occurred.

● Fixed an issue where in rare circumstances, selecting or ejecting a drive could cause a player to hang.

● Fixed an issue where unplugging and re-plugging a drive would result in the drive not showing up on a remote player.

● Fixed an issue where repeatedly mashing the left hand collection buttons could lead to a hang.

● Fixed an issue where folders ending in “ “ or “.” would result in tracks within that folder showing up as unavailable.

● New BPM FX: HALLECHO, BITCRUSH ! (You must perform System Reset On Mixer once, after loading firmware to see these)

● Added tail to REVERB when effect is turned off

● FILTER button now flashes when any filter is active

● Fixed issue where X1800 was not recognized on Mac OS 10.10 systems during hot plug

Looks like i’m the first to update my X1800. Looks like i’m the first to get his mixer f up and stuck in some kind of loop. I’m absolutely fuming. if I just turn the mixer on it just sweeps the lights forever, nothing happens. if i connect my laptop back up and use the updater, it says update failed because the device cannot be accessed. Someone better sort this quick

check for the possible solution here

I think edge may have wiped out the STM and DSP firmware before updating the USB Audio Device (XMOS). Which means that the XMOS cannot be updated until the STM and DSP have been restored. Luckily, there is a solution.

To fix this you will need to first update the CONTOL SURFACE (STM/DSP) Firmware. Connect the X1800 PRIME to your computer via USB 1. Power on the device while holding BACK + FX CUE + TAP. Choose OK to start the update. Next, follow the specific steps below for yo…

Somethings happening now, thanks for the quick response I’ll update once I know more

I think we need to gather some basic info of OS type/version and perhaps notebook brand/type. Could as well be a compatibility issue.

that method seemed to work so thank you very much for that work around. after successfully running updater2, i ran the normal updater for the usb interface but it said already updated, I’m not 100% sure it has. i’m using windows 10, lenovo yoga 13.

I had the same troubles, workaround worked like a charm! Much thanks!!

Yes , fixed mine too. wow I am so glad we have people or DJ’s who work together . Thanks my friend post above. I still will keep my order for the reloop for my back up so this will not happen again to me . But " THANK YOU " for the fix and your time to post . lol We would still be pulling our hair out . I hope Denon post this on the directions to help others update . Human’s are not perfect and I will be the first to admit that . Live and learn , that is why DJ work and practice so hard . THANK YOU ! Yes I still love my Denon set up …lol just a reloop mixer for back up is a little cheaper . Enjoy all .

Thanks a lot, it saved me

Can you help me, Traktor Scratch Pro with timecode cd or vinyl is working with X1800 after firmware update?

Currently Traktor is not supported, scratch certificate is not in plan afaik.

Thank you very much. Could someone from Denon offically confirm the message above?

No need for Denon staff. Latest update makes the mixer DVS ready. You need to wait for the software companies to support the mixer.

Serato has promissed early this year support will come (voucher is the X1800 package). Rumor is version 2.0. Native Instruments has not made any statements in certifying the X1800, so complete no-go yet.

I was surprised by the quickness of the update, I just moved and didn’t have internet yet and used my phone as a hotspot for my Mac. Updated with out a hiccup and am loving the new update.

Thanks, got that hint via Denon already - downloaded

My internet skills were just a bit surprised; a sticky topic, by DenonDJ, 12 days old, with a dead firmware link.

Yeah InMusic staff seem to use Sharepoint and share files that way; not really straight forward and links can become dead/obsolete very easy this way.