There’s been a number of requests to address the screen font sizes which has been totally ignored. Obviously Denon has no interest in the older people or those without 100% perfect eyesight. An option could be easily added to change the screen font size. The screens are large enough to do so as some things on the screen don’t need to be as large like the wave forms. When I originally purchased the Prime 2 this was not a problem but then Denon in their wisdom changed all that in an update giving little thought. Anyway I’ve waited long enough and for this reason I’ve decided to move across to Pioneer and Recordbox non standalone.

Tap the list icon at the top of the display to toggle between standard and expanded list views. 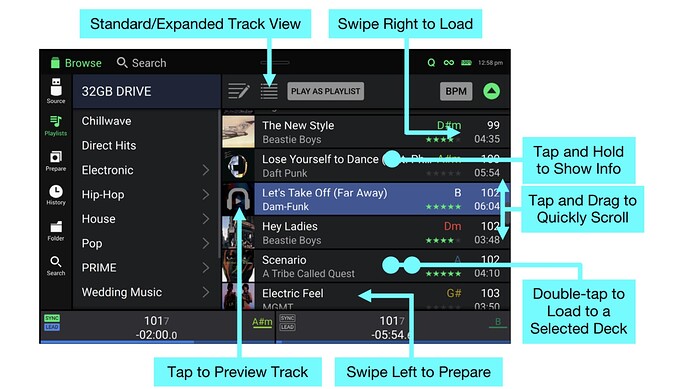 Or are you referring to other fonts than the library? Also curious what requests you’re referring to? Are those request from the new/open request or from the legacy request section?

Interesting that after using Pioneer and Recordbox for the last 10 months and firing up the Prime 2 nothing much has changed regarding this. Is it really necessary to have a number of people complaining about the same thing before it qualifies to be looked at. I’ve seen this as being typical of how Denon responds to issues since purchasing the Prime 2. It was a very brief visit back.

Again, if the problem is your eyesight, shouldn’t you really be looking at getting that resolved? The screen and text on the prime 2 is sharp and clear, its one of the strong points of the unit when compared to rival brands offerings (Long term CDJ 2000 user).

Eyesight is not the issue. Yes I wear reading glasses but as a 74 year old I’ve been told that it’s really good. I don’t have the same issue on any other equipment only the prime 2. Don’t have any trouble with any of the dulled text on the screen only the BPM one. The other dulled text is grey on black the BPM grey on grey. That’s the issue. Don’t have any issues with the Pioneer standalone’s either. I’m sure there are others that have the same trouble. They just put up with it and don’t say anything.

place it as a feature request and let people vote on it if you think its a sufficient issue that many people are having.

im wearing glasses right now to read this computer screen, yet i can see the font on the Prime 2 with no issues, so id say perhaps you do need to wear your reading glasses, or your eyesight maybe isnt quite as good as you think.

But anyway, raise the request and let the people vote.

Interesting that after using Pioneer and Recordbox for the last 10 months and firing up the Prime 2 nothing much has changed regarding this.

It might be an eyesight thing again but, did you not see the response that was given to you original post? There’s an on-screen option to change the font size

No the problem isn’t in the library font size that that addressed. The issue is with the BPM font and only the .1 part of the number. The ie. 126 part is ok. Mainly related to that latter part of the number being grey on a grey background.

Obviously Denon has no interest

And also that you mentioned above that :

I’ve decided to move across to Pioneer and Recordbox non standalone.

He probably could have added ‘mix by ear’ to the workaround too:) sync and lining the BPM values up on screen arent the only 2 methods, and the best thing about mixing by ear, you dont even need to use your eyes at all:)

Yes I could have added mix by ear which I do anyway which is different to making the BPM’s the same using the tempo slider as with vinyl. Moving the tempo slider in conjunction with the jog to match the BPM of each side. The vinyl DJ’s would know that. These controllers have a BPM readout. Why should I not be able to use that effectively?

@STU-C and @Pasha what is really going on?

Are you the same person or just best of buddies?

Given we fell out over something just a couple of weeks back, I’d say neither is the answer to that question.

How can I be a troll? I share my name, location, DJ mixes, gear setup etc.

That’s the opposite of trolling, and just because I don’t agree with things you say doesn’t make me a troll, that’s not how the world works in case you haven’t noticed.

Thank goodness you were not around for Engine Prime 1.0 else we will still be running two sticks together, if we all just got on with it.

The Engine ecosystem which you and others are now benefiting from was shaped by the complaints, feature request and feedback of many users.

And yes I was one of those complaining then on Engine Prime 1.0.

I could be mistaken but @Pasha was around then just in a different capacity. That’s if you ain’t the same person.

@Obocaman I’m not an expert on what constitutes as trolling behaviour, but I feel some of the responses are just plain unhelpful and may add to the frustration for folks seeking help.

The responses in this thread is really the height of it…perhaps @STU-C is going to request for a copy posters refraction test, compare to his and furthermore invalidate their concerns.

On the plus side, I suppose it’s keeping the forum community “active”.

There is a massive difference between ‘seeking help’ for a genuine issue (like for example the problem i had that required my device to be repaired twice) and the histrionics and outright drivel that is spewed on this forum over things like the colour of an LED. Just this last week ive seen people claim that LED lights are ‘burning their eyes out’, oh really?

This very thread we have a 74 year old guy refusing to accept that his eyesight might not be good enough to view the screen on the Prime 2, and also refusing to wear the reading glasses he already owns, instead demanding Denon change the font on their devices instead.

Then we have the old RGB waveform discussion where the comments go from the sublime to the ridiculous.

If people reigned in their ridiculous need for bluster and exaggeration then perhaps people like Pasha and I wouldn’t respond to them with the derision they deserve. This is the whole problem with the internet, there is no filter and nobody promotes reasoned speech any more, it all has to be blown up, exaggerated, overly emotional.

Someone start a thread on here what, 10 days ago, clearly drunk as hell and decided to take his mixer apart, posting pictures with a half empty bottle of Johnnie Walker on the desk… and it was all Denon’s fault because his device no longer worked, or was complicated to take apart. thats about the level we have reached on this forum.

STU-C is not wrong…maybe also not fully right but you know, I see bits of truth in every one of your posts here to be honest.

Even the thread from guy with Jack Daniels you can say that a premium club mixer should have user replaceable line faders and that current design is a fault.

The Engine ecosystem which you and others are now benefiting from was shaped by the complaints, feature request and feedback of many users

Oh and this comment. I’ve been here from the beginning of this wild shaiteshow called inMusic Denon DJ, same as you, and let me tell you: it does NOT feel that way.

Let me explain. It probably is, but I don’t feel that specifically FORUM users shaped it. It more feels like it was some general feedback from all over that influences the roadmap of both software and hardware without any clear rules whatsoever.

Are most voted feature requests put into the roadmap? No, just occasionally some are implemented with disregard how many votes they have.

Are staff informing users what feature requests are possible within the current hardware? Not really, I can count on fingers of one hand how many times that happened, there is probably a bunch of votes wasted on impossible requests.

Do they have the same up addresses?