I just had the same thing happen because I knocked the usb plug of the drive I’ve got plugged into my desktop and it ejected. I had Engine Prime open at the time and had just finished adding some music.

It’s a Samsung MZ-76E1T0B/EU 1 TB 860 EVO Sata III 64L V NAND Solid State Drive. I was planning on filling it and putting it inside the Prime so it’s got around 300gb on it now. The files are all displaying still in Engine Library/Music and I can still see one out of the 10 or so Crates I had built but inside Engine Prime and the Prime 4 it’s saying it’s corrupted.

This took me -weeks-… I am super bummed.

@tenrohle if you read the last few messages in this thread you’ll see that denon is requesting specific information and files to be submitted to help them troubleshoot the issue.

i would not rely on ep for library management. if ep gets corrupted you can always delete the whole thing and reimport from itunes or serato.

I skimmed thru and saw that just now. Half of me is too angry to even go through the motions of zipping up the files as they’re over 3gb in size. Perhaps I’ll get to that tomorrow once I’ve cooled down a bit.

Hi, the problem is the engine library that is corrupt, my solution is to create a copy of the library, so in the event of a malfunction it is sufficient to replace the library with the backup library.

This issue has been touchy. I’ve been a Prime user for more than 2 years now (SC5000s and X1800), and been loving the Prime 4 since June. However, when playing a mobile set yesterday, power was cut to the gear and it corrupted my db. I have backups to the collection and database, but I need to fix the problem ASAP…I have a wedding to DJ today that I prepared on this drive! Not seeing a fix makes me feel uneasy right now. I get that we’re supposed to shut down properly by ejecting drives, but in a case where you loose power unexpectedly…now I can’t play at all on that drive? Not cool.

Power cut should be no problem with the Primes having a short battery. Pulling out a drive could be a bigger problem.

That being said. I never had an issue with the database on any drive.

I figured out (guessed) how to replace the db files on the drive with the backups, spent about 1.5 hours re-doing the work I did to prepare for my event today and voila! Lesson learned. Every time I update, I backup. Wish this were an easier process, like saving duplicate data on the internal sata drive, for example.

I was playing on a truck powered by a deep cycle battery and a 3000 watt inverter. The driver pulled into the gas station and told me to keep the music rolling (recording/streaming)…I thought he left the engine running, but he said not to worry since the starter is on the 2nd battery, and the music played on while we put fuel in the truck. When he went to start the truck, the whole system surged (shut down) and reset…during my set. The recording I was making on the Prime 4 did work till that moment (on a separate usb drive), but the DB was corrupt on the drive I was playing from when this power moment happened…that is, when I fired the Prime 4 back up the next time. So, crisis averted, but wish some solutions to this issue get resolved in a future firmware update. 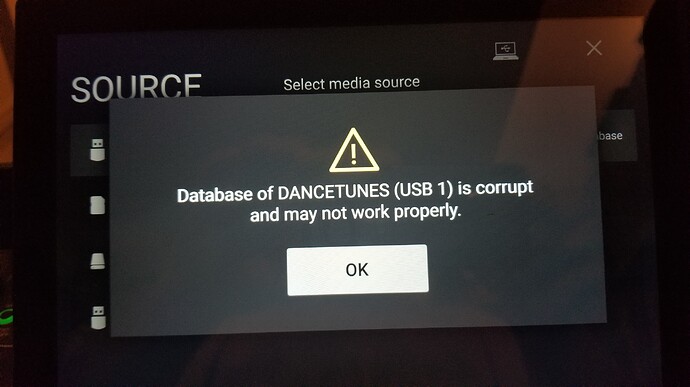 Thanks @DJTgro for this info. Will keep database backups of the USB disk from now on.

thought we have power failure safty in it, which drives down the prime safetly without killing the database

I know the SC5000 media players have battery backup that doesn’t quite last 10 seconds - would definitely be nice to have “auto eject upon power failure with battery backup” on the Prime 4 - maybe the next version?

Perhaps unnecessarily to mention, but safe removal of a drive on a power loss is not possible when the drive itself is externally powered

averted, but wish some solutions to this issue get resolved in a future firmware update.

On this scene, the solution is more to do with powering the device from a stable and trustworthy power source rather than anything to do with firmware requests

Also does the Prime 4 even have the same super capacitor/ battery backup as the big brother SC5000 ?

I think it does - I’d an overzealous venue manager pull my mains plug about 2 minutes after I finished a wedding last weekend (before I’d got round to shutting down the Prime 4, as I wasn’t expecting him to touch my stuff!). First I knew of it was “power failure” flashed up on the screen and a second or 2 later it went blank. After kinda screaming at him that he’d possibly just trashed my music database I plugged it back in and thankfully everything was fine. I’d been playing from an internal SSD. Not sure did I just get lucky, but the fact the screen said “power failure” on it means it was running on capacitor/battery for a few seconds before dying.

but wish some solutions to this issue get resolved

It’s easy very. Don’t try to do the DJ from a car battery

Power cut should be no problem with the Primes

Dose the prime 4 have the battery withinside too like the sc5000. Or even does the 5000m ? Maybe to take it out to room for spinning motor plate

@LargoS Prime4 does a shutdown after powercut like SC’s. After power-on no database error message. Clean shutdown.

Exact same here - lost 8 months of data / cue points, loops etc because I just knocked the cable… This is SC5000m

Engine Prime and the firmware should be making backups of the small library files for us and auto-overwriting damaged files with those backups.

Julianus, that would be a fine solution - what I was kind of alluding to (internal battery, or shutdown procedure to avoid db errors). And Largo, when you do this for a living, you use the power source you’re given…sometimes I bring my own generators to events, I use a voltage regulator. But when “■■■■ happens” that’s out of your control, you roll with it.

I just wonder why with the Denon Prime 4 or SC5000 media players…when using the external usbs (not the internal sata, because it doesn’t happen with that drive), your db becomes corrupt upon power loss. It shouldn’t happen! But again, as I already stated, lesson learned. I will make backing up the database a regular part of my weekly updates, and this shouldn’t happen again.

You haven’t mentioned for instance the type of usb drive you’re using, if you’re ejecting it safely on all devices you use it on (if a program is still writing to it and you just pull it out that will almost certainly lead to corruption), what format the drive is in etc.