Beat Grid only in vertical view in Prime 4?

Is the vertical beatgrid view the only option in P4 software?

Someone was talking about easy transfer from competing platforms. How easy might this transfer be for the ones who are accustomed working in horizontal view?

Prior to product announcement, we showed the Prime 4 to a plethora of international DJs and industry professionals (from club/mobile and mainstage backgrounds), and I’m pleased to report that all were fine with their first (excuse the pun) ‘hands-on’ experience in that orientation on the touchscreen. Some commented that it was surprisingly easy to get used too, and quickly. Others, naturally, did enquire if horizontal waveforms would be added, and of course it’s been acknowledged online that our Dev team are working on this as a future FW update down the line.

Thanks for reaching out and asking.

Love to hear this!

I was surprised that Prime 4 is vertical seeing as the SC5000 is horizontal. Having used the SC5000 for over a year I had hope a simple transition with a few new features to master but having the wave patterns at 90 degrees to what I’m used to will take some practice. If someone at Denon can explain why its changed maybe it would help?

The waveforms are alligned above each corresponding channel/fader. I think thats the idea.

But Denon will make it horisontal too. 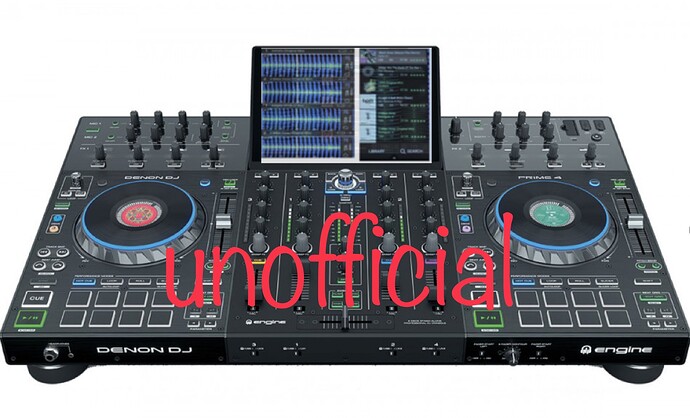 Now I see why it doesn’t really work. Its ok for 2 tracks but looks cluttered when you mock up all 4. I withdraw my request!

One thing they could do is have a grid view only. You don’t really need to see the play list on the right in my opinion. When you do, it can take over the whole screen or like the pic i mocked up but having the grids fill the whole screen might be better IMO.